what i'm reading: how to be an antiracist by ibram x. kendi 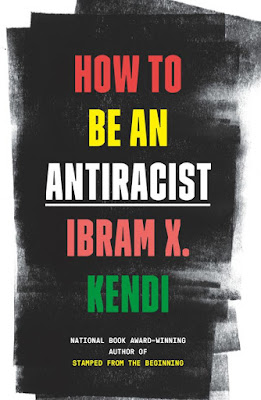 How To Be An Antiracist is an important, powerful, thought-provoking book. With unflinching precision, Ibram X. Kendi defines the roots of racism and explains how we can work to eliminate it.

The structure of the book is disarming: the explanatory chapters are interwoven with the story of Kendi's personal journey from racist thinking to antiracist thinking.

Yes, the author is Black, and he has had racist thoughts, and has engaged in racist behaviours.
He spares no mercy for himself as he looks back, cringing at his beliefs -- although understanding the tradition that they grew from. I hope Kendi's openness and his willingness to publicly criticize himself helps more readers approach his ideas with an open mind and less defensiveness.

Kendi believes that our typical conception of racism as a product of fear and ignorance is wrong, and he makes a very strong case for that belief. He shows that racist policies are made by racist people in order to further their own interests. Racism can be unmade, therefore, by antiracists creating and getting others to create antiracist policies.

In Kendi's view, it's a mistake to conceive of racism as a permanent descriptive term, an on/off, either/or state -- "He is a racist" -- as it lulls us into a false belief that we are not racist. He writes:

Here are a few things I loved about How To Be An Antiracist.

-- Kendi does a great job unspooling intersectionality, the idea that the overlapping of various identities or membership in certain social groups leads to combined privileges or disadvantages. (I strongly dislike the word "intersectionality" and I wish we called this something else, but the concept is very important.) For example, the forced and coerced sterilization of poor Black women is racist, sexist, and classist. It can't properly be seen unless all three factors are acknowledged.

Racism, sexism, homophobia, transphobia, prejudice against skin-colour, anti-semitism, Islamophobia, class prejudice -- all of these can intersect and overlap, and when that happens, the effects cannot be separated. Kendi takes the reader through each group or identity and shows that to be antiracist, one must work on all the other biases as well. Put simply:

-- Kendi frames racism as inextricable with capitalism. He's writing about modern capitalism as it is now conceived. The selling and trading of goods in a marketplace is as old as humanity. Our present-day capitalism bears little resemblance to that benign and extremely human activity.


Capitalism is essentially racist and racism is essentially capitalist. They were birthed together from the same unnatural causes, and they shall one die day together from unnatural causes. Or racial capitalism will live together into another epoch of theft and rapacious inequity, especially if activists naively fight the conjoined twins independently, as if they are not the same.

-- I love that Kendi demonstrates that the fraud and theft of the 2000 and 2004 US elections were essentially racist. He calls the actions of Kenneth Blackwell, the Republican Chief Elections Officer in Ohio, "the most egregious Black on Black crime in modern US history". Many readers may not be fully aware of what happened in these elections, and Kendi's brief summary will be very eye-opening.

-- Kendi demonstrates how antiracist policies and an equitable society would benefit everyone, including most white supremacists.


Of course, ordinary white people benefit from racist policies, but not nearly as much as racist power, and not nearly as much as they could from an equitable society, one where the average white voter has as much power as superrich White men to decide elections and shape policy. Where their kids' business-class schools could resemble the first-class prep schools of today's superrich. Where high quality universal health care could save millions of White lives. Where they could no longer face the cronies of racism that attack them: sexism, ethnocentrism, homophobia, and exploitation.

I'm highlighting what I loved about this book, but I'm purposely not trying to recreate Kendi's arguments. I feel that anything I write will be oversimplified and, because of that, too easily dismissed. I want Kendi to make the argument for you. Read this book.
Kendi's previous book was Stamped from the Beginning: The Definitive History of Racist Ideas in America, winner of the 2016 National Book Award for Nonfiction. I have not read that yet, but I gather that How To Be An Antiracist is much more accessible. This book is nothing to be afraid of. It's something to read, and re-read, and ultimately embrace.

Off topic, Laura, but did you guys manage to stay up late enough to get a look at the Perseid meteor shower? There aren't many places better for observing the night sky in summer than your end of the island when the clouds cooperate and there's no blanket of wildfire smoke.

This one is also on my list of books to read. Rebecca urged me to read it after I read White Fragility.

But I am still stuck on Prairie Fires. It's taking me way too long to read it, and I really am not at all interested in Rose Wilder Lane's story. Are there parts of the rest of the book that I should read and skip the rest? I feel like I've already read the most important and interesting parts of the book. I am up to the 1920s now... Laura is starting to collect stories about her mother from her aunt. (I've already skipped over all the parts about Rose and her travels in Europe and so on.)

I also have the other book you suggested on my Kindle, waiting to be read.

Hi Amy, I was just thinking of you and Prairie Fires, looking through my inbox.

I wish I could answer your question. I also lost interest in the book at some point, and began skimming, but I don't remember when that happened. For me it picked up again when the Little House books were published and became a success, when LIW became famous.

In general, though, if a book no longer interests you... you know what to do. :)

I am definitely in the skimming/skipping stage. I may just now do more skipping and less skimming. I do want to get to the part of her writing the books.