simple but amazing experiences healing dogs from past trauma

Cookie recently had a fear reaction, and we're working on desensitization. I thought I would share our experience with changing fearful behaviour.
Diego 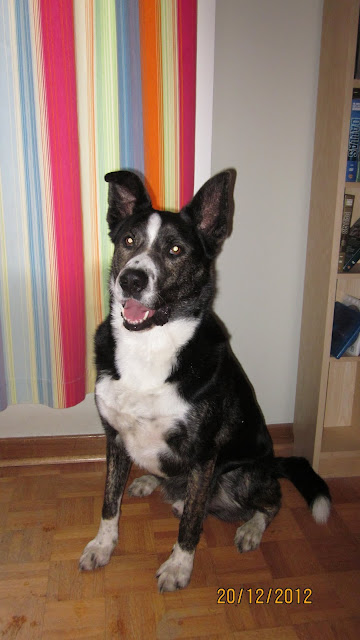 Not long after we adopted Diego, we learned he had an extreme fear reaction to anything involving his ears. Neither Allan nor I can remember exactly how we learned this, whether he growled at the vet during an exam, or something else. But I distinctly remember that, when he saw a Q-tip in my hand, Diego showed his teeth for a split-second -- then instantly looked sorry and guilty. Poor guy!
The vet could see that Diego had a very severe ear infection. Not wanting to traumatize him further or cause him pain, she suggested general anesthesia, a full-on ear cleaning, then a program to desensitize him to ear-touching.
Diego was highly food-motivated, so it was not difficult to re-program him.
First we associated the Q-tip or cotton ball with the treat -- so that he earned a treat just for seeing the Q-tip, then for smelling it on his own, then we would touch his ear very lightly, and so on. Then we moved on to very light touches to his ear, gradually increasing the interaction, using plenty of rewards and lots of happy talk and affection the whole time.
We did this over the course of a week, and it went brilliantly. Diego never had the fear-aggression reaction again, and for the rest of his life, he enjoyed being rubbed or scratched behind his ears.
Could this be why such a sweet-tempered and well-trained dog ended up in a shelter? Perhaps he growled, showed his teeth, or even snapped at someone who was trying to look into his painful ears.
Cookie
It's fortunate we had this experience with Diego, so we knew what to do for Cookie. 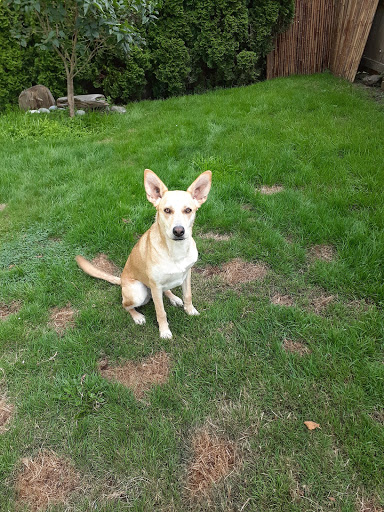 Cookie is extremely frightened of the monthly anti-flea and tick prevention we're using. I didn't understand it until I held the vial to my face: it smells like rubbing alcohol.
Cookie did live in a house where there was drinking, drugs, and violence, so it's not surprising that she has a negative association with the smell of alcohol.
When we used the treatment last month, Cookie was wary, but she allowed us to put it on her. After, she rolled around and acted strange -- and I later realized she was trying to run away from the smell or rub it off.
This month her reaction was much stronger. As I started unwrapping the vials, she jumped away. When I moved towards her, she showed her teeth for a split-second, and frantically moved away. So sad!
Because of our experience with Diego, I knew what to do. We put the stuff on Kai, then I held the empty vial in one hand, and put a treat in my other hand. I held my hands out, palm up, a few inches apart.
Cookie would dart in, take the treat, and dart away. After doing that a few times, I put the empty vial and the treat in the same hand.
She did the same thing, quickly grabbing the treat and jumping away. We did that four or five times, then stopped. That's enough for one session.
The next day, I did the same thing -- not advancing, just repeating the same level of interaction. Cookie took the treat with relaxed body language and looked at me, asking for another.
That's where we are now. I plan to do this for a few more days before trying again to use the treatment on her.
It's important to go really slowly, never forcing the dog into contact with the stimulus that's eliciting the fear reaction. Gradually, you create a new, positive association. Hopefully Cookie will soon know the smell of rubbing alcohol means a treat is coming.
Buster
Of course, not all trauma and fear-aggression will respond to desensitization. Buster, our beautiful broken pitbull, needed medication, and special training, and still could never be safely off-leash outside. But we did use a similar idea on a regular basis. 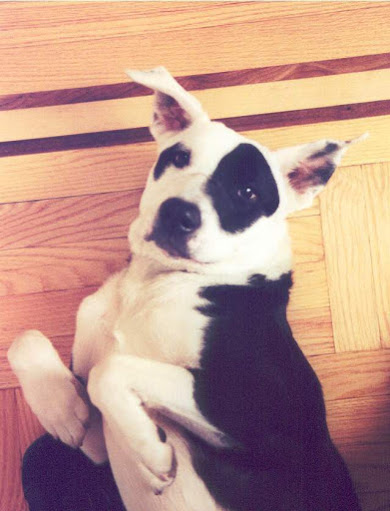 Our lives in those days depended on having a dogwalker visit twice a day, two days each week. This meant that every once in a while, we had to introduce Buster to a new person.
The behaviourist we worked with gave us a plan.
It took four sessions. Buster would be on-leash and wearing his "gentle leader" -- which made him feel safe. As long as he was on-leash and a stranger didn't enter his (literal) comfort zone, Buster was fine.
The first time New Person entered our apartment, we would scatter yummy, "high value" treats on the floor. New Person would come in, sit down, hang out, talk, say Buster's name many times in the happy-lovey voice. All the while, we would continue to scatter treats on the floor and Buster would go around gobbling them up.
Session two, we would do the same, but we would place the treats near New Person's feet -- so Buster had to be near New Person while eating the treats. New Person would sit on the couch, talking to Buster in the happy voice, saying his name often, but not trying to touch him or even putting their hand out.
Session three, New Person would offer Buster the treat, open hand, palm up, doing all the happy talk, saying Buster's name a lot. Buster would accept the treat from the person's hand, and we could see his body language was relaxed. There was no further touching, but Buster was willingly touching NP's hand every time he accepted the treat.
At session four, Buster would be relaxed and friendly. All his fear would be gone. He would spontaneously come to New Person asking for attention. New Person could put on the gentle leader, touch Buster's head. Buster would rub his head into NP's leg -- and that was it.
Once Buster gave his trust, it was total and irrevocable. But we had to do this every time, and there was no rushing it or skipping a step.
Except for one remarkable experience that we'll never forget.
Our dogwalker and his partner were coming over for dinner. We had not met Partner before, so Buster was on-leash with the gentle leader, lying down next to Allan's chair.
During dinner, Buster went under the table, and put his head on Partner's shoes. Partner reached down and stroked Buster's head, and Buster snuggled closer. Somehow, Buster understood that Partner was part of Dogwalker, and he would be safe.
Posted by laura k at 8/10/2020 08:00:00 AM

We're lucky not to have any dogs with traumas at this level. And Jake has gained so much confidence since he arrived! (Pearl may cause trauma, but she doesn't seem to have any.)

These little stories of your successes are really lovely to read though. It's sad that I never got to meet Buster.

He was a prince. A damaged, psychotic prince. Seriously though, to the people he trusted, he was such a great dog. It took me forever to get over him.

I have a friend who says that B's story has given her hope in dark times. That as sad, and abused, and frightened as he was, he could still love and still learn to trust.

You are both so kind and so patient. We fortunately never had a dog with a fear reaction like you described. Our two dogs (as well as the dogs I had as a child) were all rescues, but somehow we were lucky---or rather, they were lucky---and they all came to us fully trusting of human beings. Probably too trusting! They were all terrible "watch dogs." Zapper would bark at people at the door, but only as a welcome. All people were potential friends.

I don't know how patient we are. We just see it as our responsibility. But thank you for saying that. :)

Most of our dogs were fully trusting of people. Diego was overly friendly, loved everyone in his incredibly enthusiastic way. It was just that specific fear -- and the same for Cookie.

Cookie loves people and is super affectionate -- but sometimes it seems like she barely needs us. She's so independent! Loves to be off doing her own thing.

Dogs know when they're loved, so of course your dogs are loving!

We got Presh when she was six months old--she'd been manhandled badly by a 10 year-old boy who had often put her in the toilet to amuse himself.

Not surprisingly, she was terrified of both being picked up and of bathtubs and our pond.

She did allow herself to be picked up, though shaking violently, and so we avoided the situations or provided her with intermediate jump-steps up onto, for example, the vet's exam table. She'd jump onto anything you pointed to. Country living...we skipped the baths altogether.

And then one very hot day, a year before she died at age 15, she came down onto the diving rock at the pond's edge. That was a first.

We looked at each other for quite a while.

--Do you want me to pick you up? [A question she understood perfectly well and which ordinarily sent her far from my tentacle arms.]

I reached both hands down and touched her sides. Again, this ordinarily would have sent her scampering out of reach.

--You want to go in the water?

I cradled her gently without lifting her and asked again if she wanted me to pick her up. I repeated that five or six times. She stayed on the rock. I lifted her an inch or two, put her down, repeated that a few times.

I picked her up, put her in the water, and she swam about two feet, out and back. Shook herself off, wagged, and went about her usual business.

In the next year she initiated the same rigmarole, shortened now, a half-dozen more times. Her swimming progressed to the point where, by the end, she swam at least 2.5 feet out and back.

So, there's the self-healing story. Or the story of how it only took her 14 years to desensitize herself.

I still can hardly believe let me help her reenact the primal traumatic events, only without the trauma.

Oh John, that is such a beautiful story.

I was wondering if you would chime in, since you have so much experience. Thanks for sharing.