what i'm reading: idiot wind, a memoir by peter kaldheim 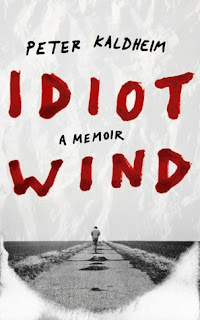 One of the many wonderful things about working in a library is having access to such a wide variety of books. This has greatly broadened my choice of reading material. In the past, I kept a list, mostly based on book reviews, and read almost exclusively from my List. I still have a list -- the constantly expanding, never-ending List of books I might one day read -- but I also grab books from displays and book carts and return bins, books whose titles and covers look interesting.

Idiot Wind caught my eye for an obvious reason: the title is the name of a song I love.* I'm glad it has such a catchy title, because it turned out to be a really good read.

When we meet Pete "The Hat" Kaldheim, he is escaping New York City with the clothes on his back and not much else. He buys a Greyhound bus ticket to the southernmost point his $36 will take him. He leaves behind friends who he has lied to, stolen from, and generally disappointed. He also leaves behind a cocaine dealer who will soon break his legs or worse, and, Kaldheim hopes, he leaves behind the choices that brought him to this desperate moment.

The first part of the book recounts Kaldheim's final crazy days in the City, a drug-drink-and-sex-fueled tragic comedy, as his cunning plan -- to earn enough money selling coke to both enrich himself and pay back his drug dealer -- unravels. This story gives the reader a glimpse of a nightlife that most people have not experienced, and from the safety of a vicarious view, it's a very entertaining story.

From that first bus ride, Kaldheim takes the reader on a down-and-dirty trek across the United States, by bus, thumb, and freight-train hopping, from dumpster diving to the Salvation Army, from flophouses to homeless encampments and blood banks that pay cash for plasma.

Kaldheim is often cold, wet, and hungry -- but he's clean and sober, and full of introspection and regret. He's humbled by the kindness and generosity shown to him from strangers who themselves have so little. He also relishes the new experiences and knowledge he's gaining, feeling that he's following in the footsteps of some of his literary heroes. It's hard not to like a guy who, when he scrapes together a few dollars in Portland, heads to Powell's, the famous bookstore, to buy a copy of Orwell's Down and Out in Paris and London.

Orwell is only one of the many writers and philosophers whose names and quotes find their way into this memoir. Kaldheim majored in Classics and English major at Dartmouth University; he grew up in a comfortable suburban family, even attended seminary school. He's had some ups and downs, including some jail time, but he doesn't attribute his problems to anything but his own poor judgement and a series of bad decisions.

The cross-country travelogue cuts back and forth between the past, laden with regret, and the present, full of adventure, and simple physical pleasures, and the compassion and generosity of total strangers. The reader has a sense that Kaldheim will pull his life together -- after all, he did write and publish this book -- but how and when that will happen creates some suspense and many surprises.

All in all, if you're not offended by drug use or by people who survive on charity, Idiot Wind is a satisfying read.

I have two notes about this book, not meant as criticisms, merely observation.

Kaldheim's stringent self-blame is commendable in a way: he takes full responsibility for his choices. This creates more sympathy in the reader, and it renders Kaldheim's escapades more comic than tragic, as we feel his homelessness and poverty are self-inflicted.

As far as we know, Kaldheim never returned to his cocaine habit, but late in the book we do see that he probably has an addictive personality, or a predisposition to addiction. I'm pretty sure that's not a choice, either.

My other observation about Kaldheim's travelogue is that it's an almost exclusively male world. Homeless men are sleeping under bridges and in flophouses, they are lining up at charity kitchens, they are selling their blood in "stab labs". But there are more impoverished women in the US than men, since so often women are the sole providers for their children. We don't see these women at all.

Kaldheim's journey would be exponentially more unsafe for a woman. And I'm not implying that the author should have written about anything outside of his own experience. It just made me wonder: where are the women? They are scraping by on meager government assistance. They are hidden in every dark corner of every city, using sex work to survive. They are dependent on abusive partners. They are victims of trafficking. But they are not, apparently, tramping across the country hitching rides and eating at the Salvation Army.