I've been putting off the recall training. We have equipment, and we have advice, but we don't have a plan -- because we haven't made it a priority. Honking big flashing neon note to self: make it a priority.

This morning I when called in both dogs from the backyard, only Kai appeared. And she appeared from behind some foliage. Hmm. I called for Cookie a few times, then followed Kai to the back fence.

And there it was, well-hidden behind tall flowers. A tunnel. 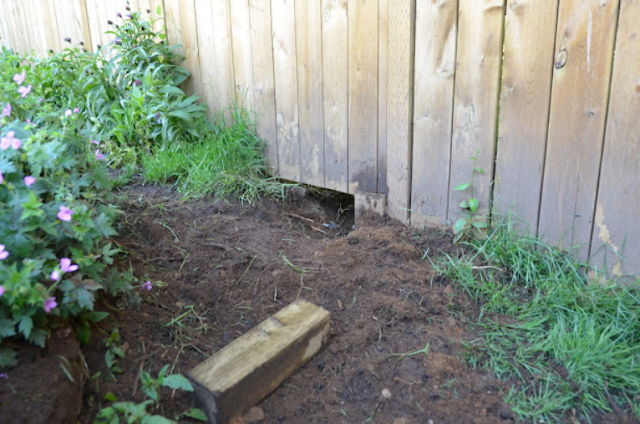 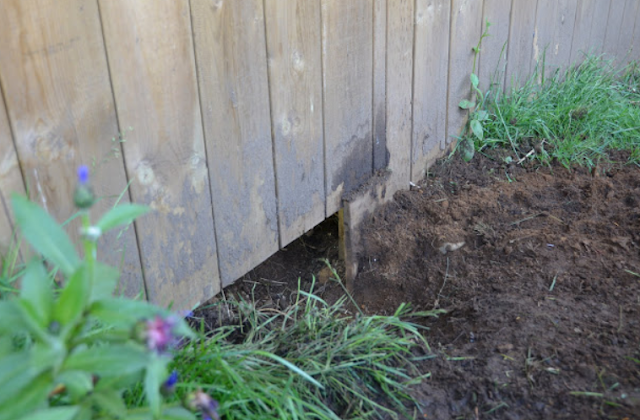 You might not think our girl could fit through that space. 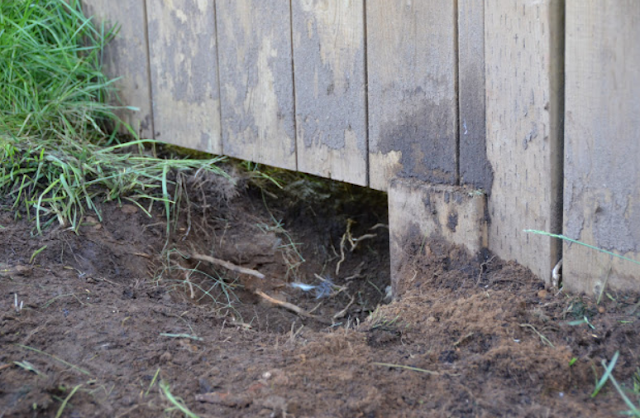 This escapes marks a milestone for She Who Cannot Be Contained. It's the first time she's breached the main perimeter fence. The new fence which cost many thousands of dollars. Sigh.

I grabbed Cookie's collar and leash, and my car keys, assuming I would have to drive around looking for her. Once out in the road, I saw a neighbour, several houses down, was talking to Cookie, trying to keep her occupied. I yelled for Cookie -- also yelled a thank-you -- and she came running full-tilt towards me. Yay! She's doing it!

The celebration was premature. I grabbed Cookie, but while I struggled to get her collar and leash with my other hand, she squirmed away. And off she went, running around the neighbourhood, the happiest dog you've ever seen. We'd see her investigating the porch furniture on one house, then she'd disappear for a while, then re-emerge from a different yard, her front legs flying in the air, her tongue wagging, a huge panting grin on her face. I wish I had a video to share, but capturing the scene is not a high priority when I'm trying to capture the miscreant.

At one point she approached me to check out the treats I was holding, then realized it was a trick, and took off again. Food is just not that interesting when you're running wild and free.

This went on for quite a while. It's embarrassing.

Finally, we used the only thing that works when we're at the beach: pretend abandonment. Making sure Cookie was watching, we put Kai in the back seat and drove slowly down the street. She followed the car -- even circled us -- but when we stopped, she would take off again.

Then, while Cookie was off in someone's backyard, out of view, we drove to the end of the block and stopped. She emerged, didn't see us, and took off at full speed -- towards our house. I called very loudly, Cookieeee!!  She turned, and ran as fast as I've ever seen her run, straight to the car, and jumped right in.

She is sooo bad (not really). She's a tease, a smart dog, and a dog with wanderlust! How did she do that to the fence? What's next? Tying her to a line or something? Are cars a threat where you are? It seems she stays in the neighborhood, but would she go further if at some point you hadn't noticed she was out of the yard?

Now---do you think Kai couldn't fit under there, or is she just a more compliant dog?

Here's a quick profile of Kai: the first time Cookie opened the front door and let herself out, Kai sat in the doorway, peeking her head out, but not taking one step outside. And looking guilty anyway!

Kai is super obedient. She wouldn't leave because she's not allowed to. (That cracks me up. Kai is a goody-goody. Cookie is more like me!)

She didn't actually do anything to the fence. She dug in the dirt underneath it, to create a tunnel.

We can't tie her to a line, that would be a disaster. All we can do is continue to reinforce the bottom of the fence with horizontal planks (screwed in the opposite side) and chicken wire.

Cookie *mostly* stays on our street, where cars go very slowly. But the reason I got in the car is that a few times we've recovered her from a street parallel to ours. So there's our backyard, the fence, then some trees, then another street. And on that street, people do drive faster. She trots alongside the road, and she's pretty fast and sharp (obviously). But still, it's a big concern!

Cars are always the biggest concern. I don't even want to think about it. I wonder how long she would stay out for and whether she would come back on her own. Obviously half her fun is the chase. I wish I had some advice! We did have a dog who wandered off when I was a child but my parents had this screwy attitude that animals were meant to be free so it was okay. (We lost many cats that way.) Mostly Colleen followed me around, but she also was known to steal burgers and steaks from people's grills and sit outside their homes, begging for food (and she was well-fed at home). The two dogs Harvey and I have had always stayed in the yard or walked on a leash with us, so they were more like Kai. A GOOD dog. :)

She has never wandered too far off. Both Allan and I feel she would always come back eventually. If it weren't for the presence of cars, she might do well as one of those dogs who wanders around having adventures, then comes home for dinner when she's ready. But we do live in a town, and there are cars.

There are also bears, and cougars. It is not that unusual in this area for off-leash dogs to be killed by either of those.

I'm on vacation for all but Friday this week, so after that bit of fun in the morning, they got to go to the beach in the afternoon. In the summer, Cookie zooms to one of the little ponds of water that remain when the tide goes out because there's a dip in the ground. And she splashes after little minnow-esque "fishies" that appear to dart out of the sand under water. She never tries to catch them, but she walk around and lunge at them the entire time we are there. In colder weather, when the fishies are not around, she and Kai will sprint up and down the beach at top speed for 30 minutes straight. It's remarkable. Not in summer, though. Kai will fish a bit, but she is not obsessed like Cookie.

When it's fish season, we tie a rope to Cookie's collar, so we can reel her in when it's time to go. At home, I was bringing stuff in from the car, and after the third trip, I closed the door. Spoiler Alert: I forgot to lock the front door. ... About three hours later, Laura is practicing piano, I'm upstairs, and Cookie tries the front door. It opens! I'll bet she was shocked it worked! And out she goes!

They had eaten dinner a little earlier, but I put some food in her bowl and went out in the driveway. She was sniffing in the yard next door. I shook it the bowl. She was interested. I opened the gate to the back yard and put the bowl on the grass and stepped aside. She slowly walked right to the threshold - peek in, and turned around and ran away! That little fucker!

I did the Kai-in-the-car routine, this time driving in the other direction. It did not take that long. She chased the car for a bit and when I got out and opened the back door, she jumped in my door.

Tomorrow promises to be a less-exciting day for the Cookster.

Spoiler Alert: I forgot to lock the front door. ... About three hours later, Laura is practicing piano, I'm upstairs, and Cookie tries the front door. It opens! I'll bet she was shocked it worked! And out she goes!

Twice in one day! Let's just say I was less than charitable about it.

I continued practicing and let Allan get her back on his own.