1. Most violence is not being committed by protesters.

What percentage of protesters are violent? Filter for police provocateurs, filter for white nationalists, filter for random thieves hiding under cover of mayhem. All of those exist at mass protests and have been proven to exist countless times.

What percentage of actual protesters used violence? 0.5 percent? I have been to my share of protests, and I doubt it is even that. 0.05 percent?

What percentage of media coverage is about violent protests? 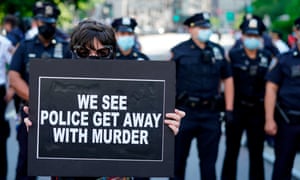 2. Most violence is being committed by police.

And while it's true that they were egged on by the cowardly redneck who lives in the White House, blaming him is misplaced. This problem is as old as America.

3. The media's unrelenting focus on whether or not protests are violent is almost exclusively reserved for protests by African Americans -- and in Canada, by Indigenous people.

4. If police want to show the world that the racist violence in their ranks is caused by a few bad apples, they are doing a very poor job. Right now the bad apples could fill an orchard. I would think police have a compelling self-interest in behaving honourably. 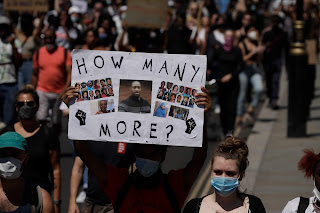 5. When the three police officers who watched Derek Chauvin murder George Floyd were arrested, and charges against Chauvin were upgraded, protests had been going on continuously for nine days.

Without visible and sustained public outrage, it never would have happened. As a friend of mine said on Facebook, we had to burn the country down to get them arrested.

7. The only reason we know George Floyd was murdered, and the only reason we know that Christian Cooper did not threaten Amy Cooper's life, is because there is cell phone footage. There is absolutely no reason to believe that police violence against African Americans is worse now than it has been historically. We just weren't able to see it.

And often, even when we are able to see it, the "justice" system does not care. The people who maintain that system do not care. 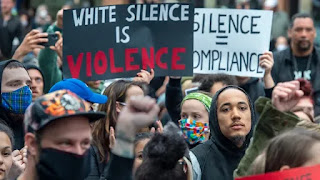 8. Canadians, get off your high-horses and do the work of dismantling this country's racist systems. The Indian Act. Residential Schools. Missing and murdered Indigenous women. Racial profiling. Carding. Two days ago, social media in Regina was warning people about a black man breaking into a car. It was his own car.

This headline from The Beaverton (Canada's answer to The Onion) sums it up. But it's not satire.

9. The strength of the protests, the pace at which they spread, the determination and persistence of the protesters, makes me incredibly proud and grateful.

10. The United States was founded on protest. All progress in the US was born from protest movements. I dare you to prove otherwise.

11. White people: you are needed. This civil rights movement must be your movement, too. Don't try to lead, don't steer, don't whitesplain. Show your face, swell the numbers, prove that African Americans are Americans. Flood the streets with your white faces alongside the brown and black ones. Prove what kind of society you want to live in.
Posted by laura k at 6/04/2020 01:43:00 PM

I prefer to call it Klanplaining. When that term starts trending, remember you saw it here first.

I would think police have a compelling self-interest in behaving honourably.

It would appear that very few of them give a shit. And the other cops are scared to speak up. Think of the thousands of videos of police violence posted online in the last 10 days. Many of them are extremely disturbing. Police *know* they are being filmed. They are murderously violent anyway. Why should they care? They have never suffered any consequences. And the mass resignation in Buffalo proves they believe it is their *right* to be excessively violent.

We have been struggling to find a way to support the protests and the changes that must be made. Right now we are not going to join crowds because of COVID. We can make donations, but to which organizations? Black Lives Matter? NAACP Legal Defense Fund? Southern Poverty Law Center? ACLU? And we are also struggling to figure out what else we can besides donate money, especially right now when we are pretty much home-bound and not even seeing our kids in person. I agree that we need to listen, not talk, and I am looking for guidance on what we can do to help so need to figure out who to listen to.

I am planning to post this with some commentary -- a scaffolded approach to being an ally.

Where to donate, I think those are all good ideas, but I personally would think BLM, bail funds, and/or ACLU.

I struggle too with my limited ability to support in a more tangible way than dollars. Reading is important. Anti-racism books are sold out in bookstores all over the US and are pushing up all the best seller lists. That's very cool.

That website looks really interesting. I will take a closer look tomorrow when I am more alart. And I also need to research where to donate. Thanks, Laura.