essential reading on anti-racism: "we can't tinker around the edges. we need to dismantle systems."

During the current focus on systemic racism, this is likely the best essay I've read. It's written in a US context, but it applies to Canada, both for Indigenous people and black Canadians.

Since the casual killing of George Floyd on camera, unprecedented protests — not policy papers — have radically shifted public opinion in support of the battle against systemic racism. The new nation being born in our streets may yet blossom into Langston Hughes’s “land that never has been yet / and yet must be” — but only if this movement refuses to let its truths be marched into the narrow cul-de-sac of “police reform.” 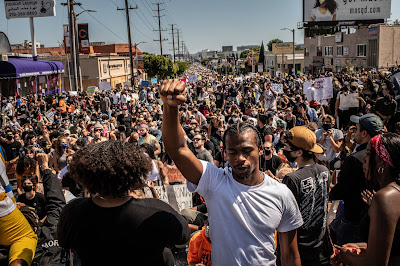 Yes, years of police killings of unarmed African-Americans had stacked up like dry tinder. True, George Floyd’s public murder furnished the spark. But freedom’s forge must finish its work while the coals are hot. This is the hour to reimagine what America could become if “We the People” meant all of us. America needs what this movement intends to do: change history, after which police training manuals will follow.

We have witnessed a multicolored and intergenerational uprising whose power grows more poised and peaceful by the day, winning support that reveals a newly mobilized majority in our midst. Let no one mistake peace for quiet, however, nor mistake the rage over police violence as ignoring the roots of policy violence and poverty violence. The ruthless indifference of our governments to the poor was clear well before Covid-19 laid it bare.

Cries of “I can’t breathe” call out in compelling shorthand America’s enduring racial chasm in every measure of well-being: health care and infant mortality, wages and wealth, unemployment, education, housing, policing and criminal justice, water quality and environmental safety. The bills that bustle through our legislatures offer narrow reforms of police procedures and bypass the fullness of what the protesters are saying: The children of privilege are protected not by a higher grade of policing but by deeper layers of resources — and that is what ought to protect all of our children.

That so many Indigenous nations have joined the protests should surprise no one. The challenges that confront African-Americans are endemic to these peoples as well. Their unique, continuing struggle to exercise their sovereignty against a continuing conquest reminds us of how deep and various are our struggles against white supremacy. Their own modern Selma — water cannons used on peaceful protesters on a 23-degree winter night — happened near the Standing Rock Indian Reservation in November 2016.

The marching feet say what the Congress cannot yet hear: Our national history and character carved these scars into our body politic. Policy tinkering will not heal them. If we are to understand the pressing need for radical reconstruction of our nation in this moment, we must look back to see how 400 years of compromises with white supremacy brought us to this place. The American Revolution’s dreams deferred now call us to a brighter common future.

To hear that call, we might turn to Monticello, where an enslaved woman fetched future-President Thomas Jefferson the lamp by which he framed God’s unalienable human rights, and to Constitution Hall, where the founders secured “the blessings of liberty for ourselves and our posterity” by compromising with racial tyranny.

It is crucial to remember that many patriots of that Revolution found slavery incompatible with its meaning. Mr. Jefferson’s 1774 “A Summary of the Rights of British America” claimed, “The abolition of domestic slavery is the great object of desire in those colonies.” That he wrote this while holding a deed to a baby girl who would one day bear him six children only marks the human paradox of chattel slavery in a democratic republic.

At the Constitutional Convention, Southern delegates required that the document bow to slavery. Fearful of the North’s larger electorate, the planters nixed direct national elections and created the Electoral College to constrain the popular will. They demanded their property in dark flesh be counted as three-fifths of a person for purposes of white representation in Congress. Such measures gave the Southern planters power beyond their numbers; for 32 of our first 36 years, presidents hailed from Virginia and enslaved other Americans.

Jefferson knew America had gained a nation at great cost to its soul. Slavery, he predicted, was “the speck in our horizon which is to burst on us as a tornado, sooner or later.” That “tornado” roared in 1861 as the nation plunged into Civil War. Nearly 200,000 black soldiers battled for the Union. Gen. Ulysses S. Grant reported that their valor constituted “the heaviest blow yet to the Confederacy.” After the victory, African-American families gathered in Freedmen’s Conventions across the South. These men and women sought schools for their children, protection from Ku Klux Klan terror and full citizenship.

The interracial Reconstruction governments created the South’s first public schools and eased restrictions on voting for poor whites as well as freed people. Black citizenship so offended Southern conservatives, however, that by the mid-1870s they turned to unspeakable violence to crush all dreams of a nonracial “We the People.” Between Emancipation and the turn of the 20th century, interracial “fusion” political alliances, mostly between poor farmers, black and white, emerged in states of the former Confederacy. Most were surprisingly robust and persistent. In three states of the Upper South, Tennessee, North Carolina and Virginia, these “fusion” movements actually took state power. These hopeful democratic experiments ended by blood, not ballots. Tyrants dubbing themselves “Redeemers” stole “We the People” from us and built the Jim Crow South on white supremacy, ending hopes for democracy until the 1960s.

Even now, the ancient lie of white supremacy remains lethal. It has left millions of African-American children impoverished in resegregated and deindustrialized cities. It embraces high-poverty, racially isolated schools that imperil our children — and our future. It shoots first and dodges questions later. “Not everything that is faced can be changed,” James Baldwin instructs, “but nothing can be changed until it is faced.”

Change requires an honest confrontation with our history and what Dr. Martin Luther King Jr. called “the strength to love.” These new American revolutionaries speak their love and strength in language less about right and left than right and wrong. They demand a genuine democracy and are skeptical of democratic braying from a Congress that watched the U.S. Supreme Court wipe its feet on the Voting Rights Act. Nobody in these protests intends to accept a democracy that consistently fails to ensure that all Americans, including people of color, women, immigrants, the elderly and students, have easy and equal access to the ballot. They consider it common sense that democracy will not survive without high-quality, well-funded and diverse schools.

What Dorothy Day called “a revolution of the heart” is blossoming in our streets, where the revolutionaries seem confident that America can spend less on endless war and the police state, make the 1 percent and the corporations pay a fair share and be able to ensure health care, living wages and affordable housing for all. All demand that our legacy must include a livable planet. Black and white, immigrant and Indigenous, Asian-American and Latinx, straight and L.G.B.T.Q., of every hue and faith, they make it plain: These things will require not mere policy tinkering but dismantling the interlocking systems created by and for white supremacy and gender-based oppressions.

Their stunning faith in the possibilities of American democracy will be their gift to both our ancestors and our descendants. And they are inspiring a nation to summon once more the courage to change history. “America never was America to me,” Mr. Hughes writes. “And yet I swear this oath: America will be!”

William Barber II and Liz Theoharis are co-chairs of the Poor People’s Campaign: A National Call for Moral Revival.
Timothy B. Tyson is a senior research scholar at the Center for Documentary Studies at Duke University.
Cornel West is professor of the practice of public philosophy at Harvard University.
The Poor People’s Campaign is mobilizing a coalition of national and grass-roots justice organizations for change on June 20.
Posted by laura k at 6/20/2020 07:55:00 AM