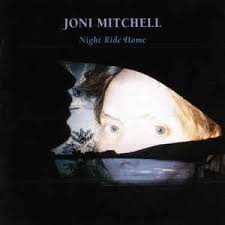 Although I mostly enjoyed Joni's previous album, Chalk Mark In a Rainstorm, I still harboured a nagging doubt and vague dislike.

Both Chalk Mark (1988) and Dog Eat Dog (1985) didn't feel like Joni to me. I don't mean that they didn't repeat some formula or sound. I hope it's obvious that I don't approach music from that point of view. Those two albums had a cold, flat, pop-synth feel.

Re-reading my posts about them, I noticed I wrote almost exclusively about the lyrics. It was as if I hadn't even heard the music. So I went back for another listen, and it was no accident -- you don't hear the music. It's vague, cold, and indistinct.

Night Ride Home ends that unwelcome trend. You can hear Joni's playing and her arranging, and it's a welcome sound -- warm, intimate, distinctly musical, rather than synthetic. Joni's acoustic guitar, Larry Klein's bass, and some beautiful percussion by both Klein and Alex Acuna form a warm, dark backdrop for Joni's voice, which is deep and rich.

The album's title track is another happy love song! Have these gone from Joni rarities to standards? Unlike the celebratory pop sound of "Solid Love" from Wild Things Run Fast, Night Ride Home has a languorous, romantic feel. It conjures an image of quiet joy and freedom that resonates deeply with me.

One of the album's most fascinating and enigmatic songs is "Passion Play (When All the Slaves Are Free)". The title, of course, refers to the story of Easter, then juxtaposes the Christian imagery with contemporary commercial ones. The first two lines of the song -- "Magdalene is trembling / Like a washing on a line" -- conjures something Joni will sing about a few albums from now. In fact, it was through Joni's music that I learned about the horrific Magdalene Laundries, which I have written about several times.

"Slouching Towards Bethlehem" is equally enigmatic, interpreting and building on the poem by W.B. Yeats. Few writers could successfully use such a famous piece as a base for their own lyrics, but Joni's words blend beautifully with the original.

Other songs are more straightforward. "Cherokee Louise" paints a painful picture of an abused child. In "The Windfall (Everything for Nothing)", Joni sneers and nearly spits at the greed and rapacious materialism that she sees all around her.

The only song on this album that doesn't work for me at all is the nostalgic and prosaic "Ray's Dad's Cadillac". But this is a mainstay for Joni of this era. She often re-visits the music-and-friends portion of her small-town Canadian upbringing with warmth and happy memories.

The cover art on Night Ride Home is collage made from Joni's own photography. On the front cover, we see the profile of (perhaps) a man driving, as seen by the other person in the car, and maybe Joni's own reflection in the visor mirror. There are images of some natural setting, perhaps a lake, seen from the road as the couple drives by.

I don't read too many reviews when I write these posts, but I did find something interesting about the album's cover from a review in Billboard. In "Exposing Joni Mitchell's New Album", Chris Morris writes:


The cover of Night Ride Home features a photographic self-portrait.

[Joni] dates her involvement with film to a 1983 live concert in Santa Barbara, Calif. A five-camera crew shot the show; two of the cameras broke down, and Mitchell subsequently had to fill holes in the continuity with other footage.

"That's where I learned film making, on this project -- working from found footage and making it work," she says. "I didn't know the rules, so I broke a lot of them. People kept saying, 'You can't do that, you can't do that.' What came out of it was a pretty strange, experimental kind of piece, but in England they liked it, they played it . . . A lot of early videos in England bore its influence."

Mitchell subsequently shot a Super 8 documentary of the '83 tour, "Refuge In The Roads" ("It's a home movie," she says). In 1988, she worked on three self-financed videos for tracks from the album Chalk Mark in a Rain Storm.

"None of these were authorized by the company," she explains. "Unfortunately, what happens then is that the outlet, the door is closed to you. There's no single with it, there's no push, no one sees it. [For] the money to make them, I sold some paintings in Japan, and I took my profits from that and plowed them back into video art."

The videos were met by resistance at major outlets. Mitchell says, "Finally I told my manager, 'Let's get 'em out somewhere, let's call little small stations . . . Let's just get somebody to play them, because they exist.' Small local stations took them."

Mitchell took a hands-on approach to the video for the current single, "Come In From The Cold", editing director Rocky Schenck's footage. "There were 180 minutes of film," she says hoarsely. "That's where I lost my voice -- a lot of takes . . . Down to 3:40, that's a lot of trim."

She adds, "I'd like to do more videos than the company would like to do. I have a little kitty, so to speak, which comes from the sale of my art, channeled back into art, so that way I feel there's no loss. With the barter system, you avoid the economic paranoia. I know if I deviate from what the company supports, then the audience is lost."

On my previous listening to joni post, I stopped using "bad critic comment of the album" and am now going with quotes from a feature story or interview that accompanied the album release.


I was not a protester in the '60s. . . . I was a protester in the '80s, when no one was protesting. I felt it was a nasty job, you're reviewed as negative, but somebody had to do it because everyone was in the midst of their shallow, money-grubbing rah-rah.

The album is mainly variations on the key of C, a lot of C major. People like major chords -- major chords are happy, positive chords. It's a very sunny modality, this album, and friendly. It's not that it's a smile button in any way, because there are moments of minor, where it's tragic reevaluation and yadda-yadda.

[After earlier] dissonance [and] heartlessness, only a positive sunny chord would do. I kind of stroked myself and wrote accordingly and found out other people needed the stroke of those warmer chords, too.

-- Quoted in Joni Mitchell comes in from the cold, by Matthew Gilbert, Boston Globe, March 17, 1991

The track "Nothing Can Be Done" gets a rare (outside of Mingus) co-writing credit: "Music by Larry Klein / Words by Joni Mitchell".