Continuing the series, started here. I've decided not to review these books, but instead to post a cover image and a quote.

It was difficult to choose quotes for these books, since they are books about ideas and events, with hundreds of different people quoted and referenced. After flipping through the books and seeing quote after beautiful, stirring, inspiring, infuriating quote, I decided to pull the lens back to more general thoughts from introductions and prefaces. 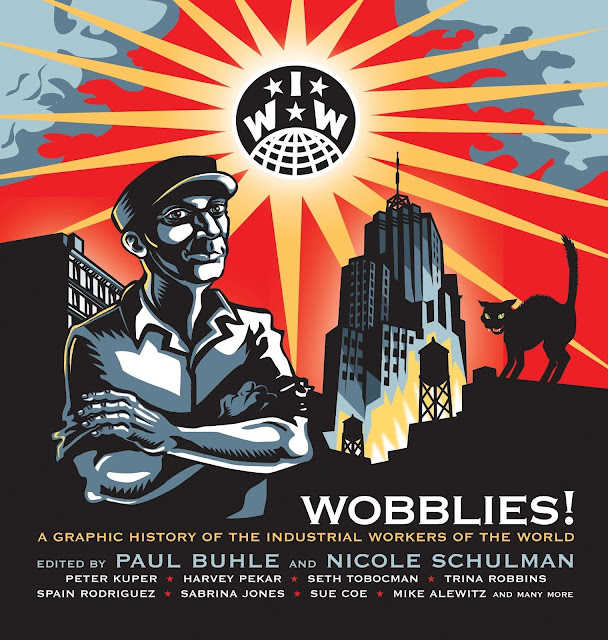 Wobblies!: A Graphic History of the Industrial Workers of the World, edited by Paul Buhle and Nicole Schulman (many contributors)


The world of the Wobs was made up of immigrant workers without steady employment, health plans, social security or drug benefits (like the future that Republicans and many a Democrat envision), without any responsibility on the part of the filthy rich for the growing class of poor -- so much like the society around us today. The world of the Wobblies was one realized in its best moments by solidarity across race, ethnic, gender, and nationality lines. The Wobbly world and promise was wrecked, finally by the eager collaboration of corporate business and the military, liberals and conservatives, all of them committee firmly to Empire. Will the same thing or something like it happen, as the empire slides into crisis again/ Only time will tell. But what the Wobs did was to hold up an alternative, the alternative we need now more than ever. (2005, from the introduction) 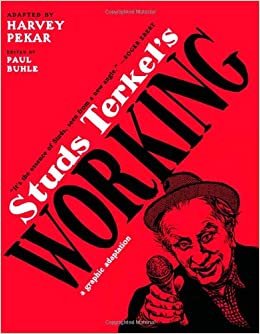 
This book, being about work, is, by its very nature, about violence -- to the spirit as well as to the body. It is about ulcers as well as accidents, about shouting matches as well as fistfights, about nervous breakdowns as well as kicking the dog around. It is, above all (or beneath all), about daily humiliations. To survive the day is triumph enough for the walking wounded among the great many of us. . . . .

It is about a search, too, for daily meaning as well as daily bread, for recognition as well as cash, for astonishment rather than torpor, in short, for a sort of life rather than a Monday through Friday sort of dying. . . .

During my three years of prospecting, I may have, on more occasions than I had imagined, struck gold. I was constantly astonished by the extraordinary dreams of ordinary people. (1974, from the original introduction by Studs Terkel)

Working: People Talk About What They Do All Day and How They Feel About What They Do, originally published in 1974, is a compilation of interviews with hundreds of working people by the late great Studs Terkel, an oral historian and radio broadcaster. It is a classic text of sociology, labour relations, and humanity. Terkel published an updated edition in 1997. 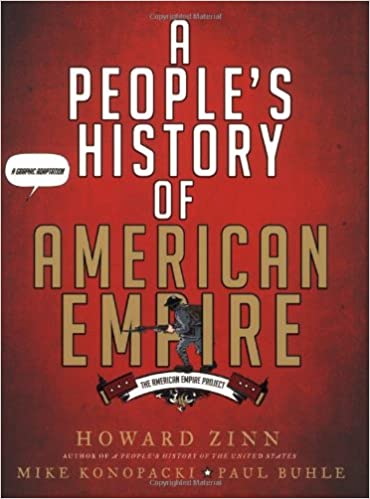 
The history of the United States was written for many generations as a heroic conquest of land and its original inhabitants, and as the steady spread of democracy from border to border and sea to sea. It culminated in the current nation being uniquely suited by history, perhaps by divine destiny, to make the rules for the planet and carry them out when necessary. Every sacrifice made, by Americans and others, was justified by that end. Even when, by 1950, atomic and finally thermonuclear war threatened to wipe out civilization, the sense of rectitude remained firmly in place. Americans had sought to make the world a better place, a nearly perfect place, even if they had been thwarted in the task.

The Vietnam War changed the perceptions of a generation. Some few earlier dissenting historians, such as W.E.B. DuBois, had pointed toward a markedly darker national saga, but they had been not much heard. Then, an evident crisis in empire brought into view past crises of empire, internal as well as external, and the high price that had been paid for those crises. Another story began to be told, not of America as a wicked place or Americans as wicked people but of the trouble in the soul of an imperial nation.

Beginning in the 1960s, scholars of various kinds started to write widely about Indians, African Americans, working people, and women, of struggles for reform won and lost, of wealth gained at vast public expense in squandered dollars and lives. This was the saga of the internal empire, precursor in many ways to the transcontinental empire to follow. None of the scholars charting this empire epitomized the truth teller and political visionary better than the then young professor Howard Zinn. None reached as many readers, a decade after the decline of the social movements of the 1960s, as an older Zinn. A People's History of the United States (first published in 1980), its pages afire with lucidity, set a new standard for the retelling of the nation's story, this time linked closely to other peoples everywhere, and likewise to a distant human past and a hoped for future. (2008, from the foreword)

The art style of the first book is interesting to me, because to me it looks like the art style is trying to be scary, but given the context I don't think it is.

Interesting note about that. In keeping with the collectivism embodied by the IWW, the book was created by many different artists and writers, collectively. So it's in many different styles. I thought that might be jarring to read, but actually I found it nice, more like manageable bites than a big book of all one thing.

They're not trying to be scary, but some very scary things happened to IWW members and organizers when the movement was very active.