listening to joni: #13: chalk mark in a rainstorm 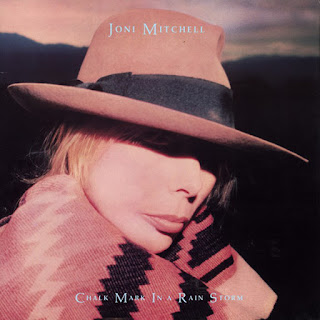 After writing my first negative review in this series, I was half-dreading listening to the album. Happily, I ended up pleased and relieved. Chalk Mark In a Rainstorm is a solid album with some lovely and memorable songs. There are choices that don't work for me, and one truly awful song, but overall the album is a great improvement over the previous Dog Eat Dog.

On Chalk Mark, Joni's writing is strongest when she's at her most topical. "Tea Leaf Prophecy," quotes the old spiritual and anti-war song "Down by the Riverside," using one of my most cherished lines, "study war no more". The song tells an unlikely love story of two people who met during the Second World War -- inspired by Joni's own parents. With the song's rhythmic refrain "study war no more" and "lay down your arms," not only have the lovers chosen love over war, but we are asked to do the same.

In "The Beat of Black Wings," the narrator meets a "young soldier" in a bar. The war had no meaning -- "propaganda piss on 'em" -- and has left him damaged.

I am reminded of the black crow on Hejira, but these black wings are far more sinister.


They want you they need you
They train you to kill
To be a pin on some map. . .
The old pick the wars
We die in 'em
To the beat of the beat of black wings

"Lakota" is a lament for Indigenous people, not only for the distant past, but for the present, where their land is being stolen again, for mining "the deadly ore". (In "Chinese Cafe," on Wild Things Run Fast, Joni also refers to this deadly ore: "Uranium money is booming in the old home town now".)

"Lakota" features a Native American chant, sung by Iron Eyes Cody. Cody was the "crying Indian" featured in PSAs many of us grew up with -- before his actual heritage was revealed. (His original name was Espera Oscar de Corti; he was born in Sicily.) No doubt Joni would be accused of cultural appropriation now, but this was not known at the time. (I do wonder if it had been known, if she would have cared.)


"Cool Water" -- written by Bob Nolan, with revised lyrics by Joni, and featuring some vocals by Willie Nelson -- and "A Bird That Whistles" -- an arrangement of the traditional song "Corinna, Corinna" -- have a similar earthy feel as the songs rejecting war and the destruction of the earth.

In "The Reoccurring Dream," Joni taps a familiar theme -- the dead-end of consumer culture -- using some samples of advertising-speak. I have mixed feelings about this. Sometimes I feel it interrupts the song and is too obvious, other times I like the inventiveness of the sound collage and the cumulative effect of the repetition.

"My Secret Place" has a synth-pop feel and the sound of a deliberate attempt at a radio track or single, as they were once called. It features prominent vocals by Peter Gabriel, although not quite a duet. It's not a bad song, and I like the imagery of the "secret place" that we go with a lover. It just feels facile and simple.

"Snakes and Ladders" combines two Joni themes -- materialism, and the ups and downs of a love affair. I hear it as an update on "Harry's House" from Hissing of Summer Lawns, the man trapped on the hamster wheel to keep his trophy wife satisfied. It's a duet with Don Henley, and it's a bit of a mess.

And then there's "Dancin' Clown", possibly the worst song and production Joni has ever written. This is "fool for love," upbeat edition. Bizarre vocal appearances by Billy Idol and Tom Petty push the song from a silly throwaway to just awful. Ah well. She's human.

Joni designed the cover art, using photographs taken by Larry Klein, her partner at the time. The front features a portrait of Joni with her face partially obscured by a blanket with a Native American design and a hat. Inside, she is lying on the ground covered by the blanket, wearing jeans and sneakers, the hat beside her head. A snake is coiled at the opposite corner of the frame.

The relentless sexism and condescension that featured so prominently in early reviews of Joni's music seems to have abated. So instead of "bad critic comment of the album," I'll use quotes from a feature story or interview that accompanied the album release.


I have to keep my spirit high. And to keep my creativity flowing, I've learned not to be afraid of failing -- because out of the ashes of failure may come a great idea.
-- Quoted in Portrait of an Artist in Her Prime, Nicholas Jennings, Maclean's magazine, April 4, 1988

This album is notable for the many guest appearances by other singers -- five musicians on four different songs, plus background vocals by some name artists. I don't know if this was something Joni wanted to try, or if it was a bid for a more commercial sound. It really stands out as unnecessary.