Do you watch Aziz Ansari's show "Master of None"? I like it. It's not zany or wacky; it doesn't try so hard to be funny, which I find annoying in so many TV comedies. Parts of the show are funny, but parts are earnest, and interesting. It's not sappy, but it's not afraid to be a bit serious.

In the episode we just watched, we see Dev, the main character played by Ansari, as a child, encountering bacon for the first time. He's at the home of a friend, and when his mom calls, he innocently tells her that he's eating bacon. Mom reminds the young Dev that Muslims don't eat pork -- and informs him that bacon is pork.

Young Dev looks at the bacon, confused and a bit perturbed, deciding what to do. Then he opens wide and takes another bite. Back in the present, the episode involves Dev and his friend Navid eating pork and drinking alcohol -- but leading their parents to believe they are devout. 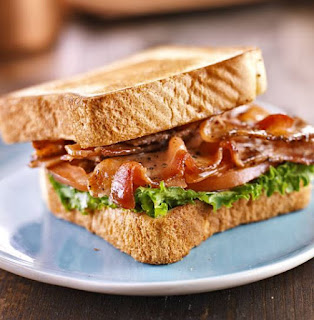 If you grew up in Canada or the US, and you're not Jewish or Muslim or raised as a vegetarian, you have probably eaten bacon your whole life. But I can actually remember the first time I ever tasted the awesomeness that is bacon.

I was raised in the Reform Jewish tradition, and we didn't "keep kosher" (as it is called). But my parents grew up in kosher homes, and a bit of that cultural memory clung to our family. It is not unusual for Jewish people who are not kosher to not eat pork, and if they do, to not eat it in their own home. Even among the nonreligious and the most assimilated Jews, pork is often the last piece of Jewish culture to go. Pork is a bridge too far.

I was maybe 11 years old, in Miami, Florida with my father, for a union convention. This was a special treat, three days in a hotel with lots of excitement and confetti, and still young enough to want to spend time with my father. On one day, my father had some convention-related thing to do, and some of his union people took me for the day, or possibly just for the afternoon. I remember being confused because there were two people named Marion, and one was a man. (What's up with that?)

The bunch of adults took me out to lunch, and someone suggested a BLT. I didn't even know what that was! I wish I knew the name of the restaurant, because one of the adults said, "You've never had [name of restaurant]'s BLT? You haven't lived!" I wasn't sure if I was allowed to eat a BLT, but my curiosity and desire to try it outweighed any fear I may have had about being a bad Jew.

There should have been sound effects, a choir breaking out in song, when I bit into it. It was incredible. I'm guessing this was a really good sandwich, but also a product of its era -- a mound of iceberg lettuce, and probably white or rye toast. But oh. my. god. Bacon!

I did tell my parents that I tried this exotic food, and what the people said about not having lived. I thought they were being serious, which my parents found amusing. I did not get in trouble and did not feel guilty.

Only a few years later, as a teenager, BLTs would become a mainstay, as would cheeseburgers (also not kosher, as it mixes milk and meat). I quickly lost any compunction about eating pork -- sausage, bacon, and especially ribs. But this memory of bacon... it is peerless.