adventures in streaming: tubi, dick cavett, and the manster

The Roku streaming device gives you access to thousands of apps... most of which are completely useless.

That doesn't mean I don't love Roku. I do! But we use it almost exclusively to watch Netflix and the Red Sox, and to access downloaded files on the TV. We've also installed a few other apps, most of which we rarely or never touch: PBS, Democracy Now!, Google Play, National Film Board, a cooking channel or two. Sometimes I page through the available apps, install one, try it, then immediately remove it.

There are dozens of apps for movies and TV shows. Some are the streaming option you get when you already have a network or cable channel. Some have expensive monthly fees, others are expensive pay-per-view, and lots are free. If the description says "classic movies" read "public domain". Classic or contemporary, there may be one or two movies of interest, then a whole lot of filler.

One popular free movie app is Crackle, owned by Sony to stream their own content. I installed Crackle because it had one movie I wanted to see that I couldn't find anywhere else. We found the embedded advertising (which you can't skip) too intrusive, almost as bad as watching commercial television. I removed Crackle, but it wouldn't unsubscribe me, and I finally had to kill-file their emails. When I checked back recently, they no longer even have that one movie.

We recently had better luck with TubiTV. It's also free, and so far, the ads are only at the beginning, and it's not too annoying to wait through them (on mute, of course). So far Tubi has given us two gems.

One is the old Dick Cavett show. Cavett was known to be a thoughtful host who did lengthy, in-depth interviews, sometimes featuring one person for the entire show. He was also really into great music. There are performances by and/or interviews with Janis Joplin, Joni Mitchell, David Bowie, Mick Jagger, Paul Simon, Stevie Wonder, John Lennon, Jimi Hendrix, and others, an impressive list.

From the movie "Janis: Little Girl Blue," an excellent biopic of Janis Joplin that I saw on Netflix, I learned about her connection with Cavett. I was once obsessed with all things Janis Joplin, and still love and admire her, so I was excited to see her appearances on The Dick Cavett Show available on Tubi. 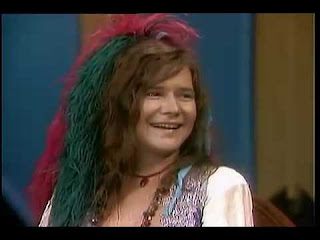 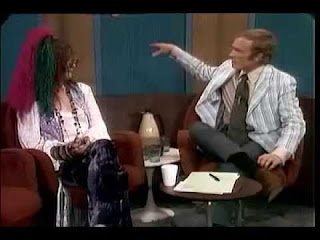 There are also interviews with famous writers, comedians, actors, athletes, politicians -- a wide swath of interesting people. Check out this episode list, it's pretty amazing.

Tubi also has a "Cult Favorites" category, on which I found my favourite B movie of all time: The Manster. I'm not especially knowledgeable about B movies, but I watched a lot of old movies when I was a kid, the good with the bad. (This is in the dark ages when we watched whatever the networks and weird local stations aired.) I've seen The Day the Earth Stood Still, Night of the Living Dead, Invasion of the Body Snatchers, Plan 9 from Outer Space, and all the other big B movies from that era, multiple times. My favourite is The Manster. 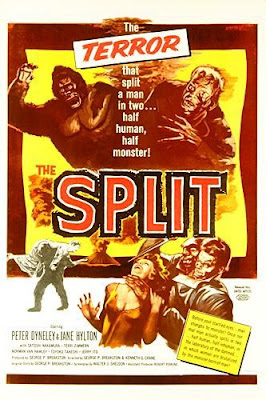 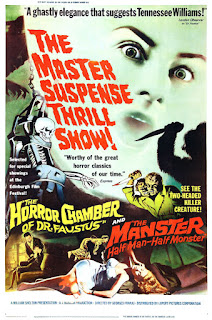 In The Manster, an American journalist goes to Japan to interview a scientist rumoured to be experimenting with youth serums. In his secret mountain laboratory, the scientist keeps various creatures locked in cages. (We later learn that one of the creatures used to be his wife.) Scientist secretly injects journalist, which causes a second head to grow out of his shoulder. The second head is evil and causes the transformed journalist to murder people.

After a manhunt, as the police close in on the two-headed journalist, the suspense builds to the shocking conclusion. With the manster standing behind a tree, we hear a giant tearing sound, like the world's biggest velcro strip being opened. Tearing, screaming, tearing, screaming... the monster rips apart from the man! Interestingly, both man and monster now have two arms and two legs. Police kill the murdering monster and the journalist is carried off on a stretcher.

I was so pleased to see The Manster on Tubi that we watched it straight through, something I haven't done since I was in my pre-teen years. It's a classic B movie combo of wild histrionics, meaningless cliches, giant plot holes, and bad lighting. But the real reason to watch are the awesome special effects. I swear you can see the strap that's holding the extra head on the actor's shoulder. 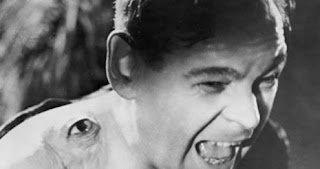 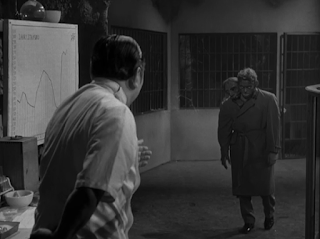 Before writing this post, I didn't even know The Manster was a famous B movie! I found it on many best-of lists. There's even an action figure. 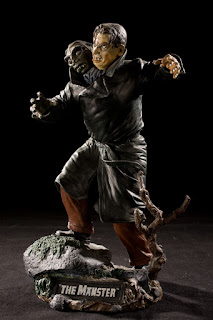 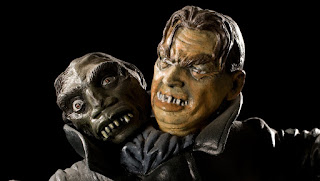