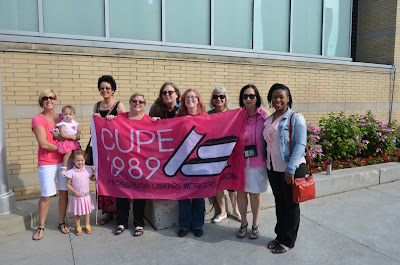 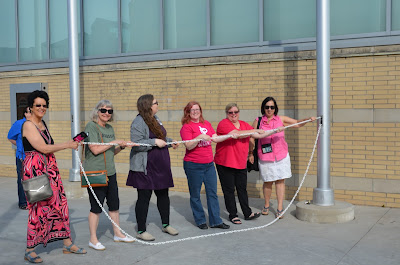 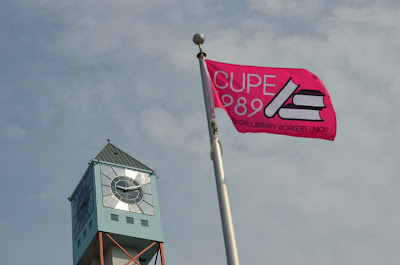 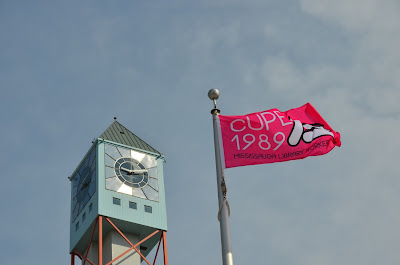 The City of Mississauga has a community recognition program, through which community groups can have their banner fly at City Hall for a day. When the program was announced, I said to a few of my union sisters, "I know a flag I'd like to see there...". I was only joking -- but they took me seriously! This morning, to the astonishment of many, the beautiful pink CUPE 1989 banner is flying beside Mississauga City Hall!

I am a member and now the president of Local 1989. In the past year, I've been invited to speak on panels, in conferences and conventions, in rallies, meetings, and gatherings of labour activists. Our local was honoured at the CUPE Ontario convention, and featured in a conference called "Building Strong Locals," held in Halifax. Everybody wants to hear how we built a winning strike, and it's been my great honour to share my reflections. 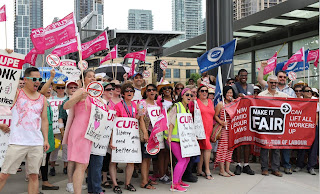 Leading the bargaining team, the strike, and our union has been one of the most fulfilling experiences of my life. I love being a librarian, but even that is far outweighed by the satisfaction I find from my union work. Leading our team through bargaining and through the strike used -- and tested -- everything I had. It felt like all my experience, all my knowledge, and all my skills, from every thread of my life, had come together for this purpose. That was extremely exciting and energizing.

It also came at the right time in my life. I'm less volatile, more focused; I have a longer fuse, and a good deal more common sense. Dealing with the physical and mental limitations from my health issues was not always easy, but I'd rather struggle with getting enough rest at 55 than popping off in tirades at 25. (I did pop off once or twice in bargaining. Hey, I'm entitled to some fun!)

Our union continues to thrive. We're enforcing the terms of our collective agreement, protecting gains we have made, and always, always, always striving to engage our members. We're also identifying and developing future leaders, so the gains we've made don't unravel when the current team steps away.

I've made great friendships. Like my comrades from the War Resisters Support Campaign, these friends are from greatly diverse backgrounds and lives, linked by our belief and commitment to this work.