Even if you live in a sports-free universe, the name Jeremy Lin may have seeped in through osmosis. The 24-year-old Harvard grad and point guard for the New York Knicks basketball team has inspired a wave of Lin-sanity and Lin-spiration around North America and much of the world. Lin is not the first NBA player of Asian descent, but there haven't been many, and none as home-grown and crowd-pleasing as Lin.

Lin is a rags-to-riches sports story. He attended university without a sports scholarship, wasn't drafted after graduation, was waived by one NBA team, then claimed off the scrap heap as a bench-warmer by another. Then, given a chance to start for the Knicks, he made history. Lin has set and broken records for most points scored and most assists in his first three, four, and five career starts, ushering in a Knicks win-streak, a Sports Illustrated cover... and a conversation about identity, generally going by the label race.

The other night I caught the tail-end of the local CBC news broadcast from Vancouver (waiting for Coronation Street on timeshifting, in my last days of cable TV). There was a lovely feel-good story on the hoards of young Vancouverites struck with Linfatuation. All the boys and girls interviewed were of Asian descent. All were clearly identifying with Lin's ethnic heritage and feeling pride and joy in seeing themselves reflected in his success, so far from the bookish stereotypes.

Yet the reporter and anchors never once mentioned Lin's background. If it had been radio, you wouldn't have known Lin and his legions of young fans shared a heritage.

This strikes me as simply silly. It's not racist to acknowledge our diverse backgrounds.

On the other hand, we have this: 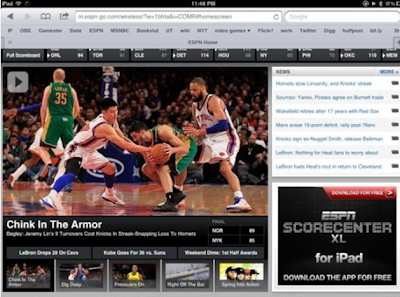 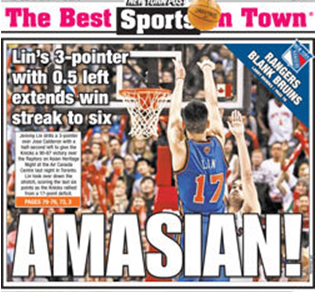 And this, made by a fan, but crassly aired by the MSG Network: 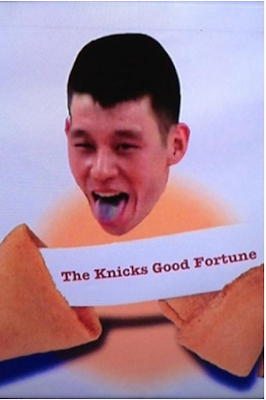 Each of these images and headlines plays on Lin's background, but they don't raise the dial on the Racist Meter to the same degree. "Chink" is a racial denigration, along the lines of spic, gook, kike, and so on. The fortune cookie, besides being ungrammatical, is fine for a fan but crass from a broadcaster. Personally, I don't find "Amasian" - in a town where a baseball team is known as the Amazin's - racist. Some people do, though, because it calls so much attention to Lin's background, in a way that wouldn't be done for a white or African American player. But isn't part of Linsanity specifically because Lin is of Asian descent? And that's where, for some people, things get tricky.

At ESPN we are aware of three offensive and inappropriate comments made on ESPN outlets during our coverage of Jeremy Lin.

Saturday we apologized for two references. We have since learned of a similar reference Friday on ESPN Radio New York. The incidents were separate and different. We have engaged in a thorough review of all three and have taken the following action:

• The ESPN employee responsible for our Mobile headline has been dismissed.
• The ESPNEWS anchor has been suspended for 30 days.
• The radio commentator is not an ESPN employee.

We again apologize, especially to Mr. Lin. His accomplishments are a source of great pride to the Asian-American community, including the Asian-American employees at ESPN. Through self-examination, improved editorial practices and controls, and response to constructive criticism, we will be better in the future.

Jason Whitlock, a Fox Sports announcer and apparently frustrated comedian, combined racist and sexist stereotypes in a tweet that drew instant criticism. And if you want to get into the dark heart of hatred, wade into the cesspool of comments on any of these stories.

African-American athlete Floyd Mayweather seemed offended by the fuss over Lin: "Black players do what he does every night and don't get the same praise." And that's true. Our society expects physical prowess from people who look African and a lack thereof from people who look Asian. Columnist Michael Dulka writes:

A huge part of the fascination with Lin is the fact that it's unexpected. The NBA has more than 400 players, and how many are of Asian decent?

Jeremy Lin has always proved he can play ball. In his final year of high school, Lin led his Palo Alto High School Vikings to a 32-1 record and beat a national powerhouse in Mater Dei for California's Division II state title.

Even with that success, no scholarships. Then, he went on to have success at the college level in the Ivy League, playing for Harvard. He entered the NBA undrafted and was given few opportunities to showcase his talents. But at every level, when given the opportunity, Lin has done a marvelous job showing what he can do.

In basketball, the expectation has become that black players are the more athletic players and are better suited to play the guard and forward positions. For white players, they can either play point guard or big man. Whether right or wrong, these are the stereotypes of the current NBA.

Those of us who follow these issues are familiar with the stereotypes that pervade college basketball coverage, where predominantly white teams are said to be smart, canny, intelligent, and hard-working, and predominantly black teams are characterized as "natural talents", who roll out of bed onto the court. In baseball, tough white guys are gritty and scrappy. When they have meltdowns, they are passionate. Black guys with the same temperament are hotheads, loose cannons, clubhouse cancers. If you're a black baseball player, best to be docile or jolly. Latin players, of course, are colourful but volatile. As more Asian players begin to appear in the major leagues, we're hearing they are enigmatic and mysterious. I don't think the sports world is less evolved or less intelligent than the rest of the world. I think it's just more blatant.

The place to turn for the most consistently progressive and insightful commentary on these issues is Dave Zirin, at Edge of Sports, and at The Nation.

But Lin already represents something more significant. When Jack Johnson became the first African-American heavyweight champion, using a style both cerebral and severe, he defied racist conceptions of white supremacy as well as stereotypes that decreed African-Americans didn’t have the intelligence to apply strategy and smarts to sport. We can say the same about Jackie Robinson when he did more than just break baseball’s color barrier and win the Rookie of the Year in 1947. Robinson also played with a grace under pressure that challenged white—and even many black—preconceptions about mental toughness on the highest stage. In addition, he did so while playing with an energy that forever changed the game. Or consider Martina Navratilova. Yes, she blazed trails just by being an out and proud LGBT champion tennis player. But she also played with a muscled strength and swagger that changed women’s sports forever. The Williams sisters owe as much to Martina as they do to Arthur Ashe and Althea Gibson.

This is the power of Jeremy Lin. It’s not just that he’s a cultural curio: “Asian-American from Harvard in the NBA!” It’s the way he plays the game. Asian-Americans, in our stereotypical lens, are supposed to be studious and reserved. We would expect nothing less than that the first Asian-American player would be robotic and fundamentally sound; their face an unsmiling mask. In sports, we haven’t moved that far from the days when we expected Jack Johnson to be a wild, undisciplined brawler in the ring or Martina to play on the baseline. Instead, we have Jeremy Lin threading no-look passes, throwing down dunks and, in the most respected mark of toughness, taking contact and finishing baskets.

For my money, Lin should absolutely be celebrated as an Asian-American player, busting stereotypes, creating new images, inspiring kids to new dreams. But the concept of race should be relegated to history, like the whalebone corset, an antiquated relic of the Victorian Age. Ethnic backgrounds, traditions, heritages - these are all real, as they rest on cultures that we participate in. Race, though, is a social fiction.

Read an American or Canadian newspaper story from the early 20th Century, and you'll find stories about the many races of immigrants flocking to the new world: Italians, Russians, Poles, Norwegians, and so on, each characterized as a separate race. None were simply called white. The European conquistadors and pilgrims thought they had discovered an Indian race, rather than hundreds of separate nations. The people abducted and forced into bondage by the slave traders were told they were African, a continental consciousness invented by their oppressors. Newspapers often referred to them as Ethopians, a generic name for black.

Each of those European "races" were allowed to become socially white, even the "swarthy" Italians and Greeks and the despised famine-ship Irish were whitened over time. In certain North American worlds, those of us whose ancestors hail from Italy, Greece, or the Jewish ghettos know that we are not quite white, and never will be. But somehow we are now part of the white "race".

Yet if a person is visibly of African or Asian descent - based solely on physical appearance - she is still said to be of a different race. African-American heritage and literature are rich with this colour divide - those who can "pass," those who, despite a white parent or grandparent, have black features, so they are black. Researching this post, I saw a reference to an NBA player who is supposedly "one-sixteenth Filipino". Filipinos, whose Asian heritage often includes remnants of the Spanish invasions. And what is one-sixteenth? Does this person look Asian, or does he wear a sign that says "I'm not white"?