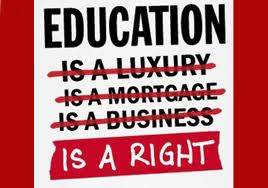 Today, February 1, Canadian post-secondary students all over the country are mobilizing in a Day of Action to demand increased education funding and a reduction in tuition fees.

In Ontario, post-secondary students from all over the province will converge in Toronto for a rally and march to Queen's Park, demanding that the McGuinty government keep its promise to slash college and university fees by one-third.

During the 2011 Ontario election, the government was elected, in part, based on a promise to reduce tuition fees by 30 percent. Right now, however, the tuition rebates the Liberal government is offering are not available to about two-thirds of Ontario students.

Students are excited to see the government taking concrete steps to address the mounting cost of post-secondary education and to ensure that low-and middle-income students are able to attend. Students have long called for a tuition fee reduction and are pleased that the government has committed $430 million dollars to provide a grant for some students.

However, students hope to work with the Ontario government to improve the policy. We are concerned that the tuition fee grant will exclude students who need it the most, is inadequate at assessing need, will be expensive to administer, will be difficult to implement at an institutional level and will fail to bring more access to the sector in the way that the government intends.

We want to ensure that government policy has the goal of addressing inequality in access to post-secondary education. To this end, we have created this document to begin a process of collaboration to improve the policy together. We hope that such collaboration will result in the implementation of a policy that both students and policy-makers can be pleased with for September 2012.

Post-secondary education is not optional anymore. Degree requirements are piled one after the next for basic entry into almost any field. But affordable education is not available to all. Students are graduating with the debt equivalents of mortgages that take 15 or 20 years to pay off - if they're well employed. It doesn't have to be that way. A provincial and federal government committed to education could change it.

Today, tuition fees are increasing at a faster rate than any other cost faced by students. According to Statistics Canada’s Youth in Transition Survey, 70 per cent of high school graduates who do not go on to post-secondary education cite financial reasons as the main factor. One in four of those cite debt aversion as their principal deterrent. Moreover, research has consistently found that high up-front costs are a significant barrier to attending college or university for many students.

While the up-front costs of post-secondary education have risen dramatically, in the last decade every province has at some point either frozen or reduced tuition fees, and public opinion polling consistently finds that an overwhelming majority of Canadians oppose tuition fee increases.

Students are asking for:
- the progressive reduction of tuition and ancillary fees at public post-secondary institutions across the country, including reduced post-residency fees for graduate students;
- the elimination of differential fees for all students (professional, out of province, and international students);
- the development of a dedicated cash-transfer payment guided by principles set out in a federal Post-Secondary Education Act for the purpose of reducing tuition fees and improving quality of teaching, learning, and research infrastructure at colleges and universities.