time-of-use energy pricing coming to ontario; is this a good thing or a bad thing?

Beginning May 1, Ontario will begin time-of-use pricing for energy* use.

With time-of-use pricing, electricity use will be billed at three different rates: off-peak (least expensive), mid-peak and peak (most expensive). Mid-peak is a higher rate than current billing, and off-peak is a lower rate. That is, under the new pricing plan, your bill cannot stay the same; it can only go up or go down.

There are also two different time-of-use pricing models, one for May through November, the other from November to May. 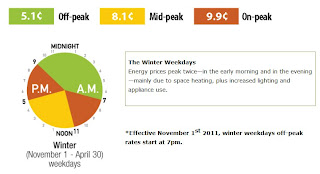 Compare this to our current rate of 6.4 cents/kWh.
Ontario has been gradually reducing its dependence on coal-fired electric plants, down from 25% in 2003 to the current 8%. The last coal-fired plant is supposed to be closed by 2030, a big step towards cleaner air and better health. Infrastructure is being upgraded, renewable sources expanded, and all that other stuff that means rates are slated to significantly increase.

So TOU pricing involves a choice between changing habits and escalating costs. With the price of energy expected to rise considerably over the next decade, most people will want to change habits.

There are very home electricity habits that one can reasonably change. Most people are not going to sit in the dark, not watch television or use their computers anytime they want, or cook dinner in the middle of the night. Some people consider air-conditioning a wasteful indulgence; for me it's a necessity. So in my view, the two most common home energy-use habits that one can change are using the dishwasher and doing the laundry, especially using the dryer.

The dishwasher is easy: run it at night. Start it before you go to bed and in the morning your dishes are clean.*

Laundry is a bit trickier. If you do your laundry on the weekends, that's already off-peak. But I'm at work all weekend, and generally do my laundry during normal working hours. I'm experimenting with different strategies of how to get the laundry done without staying up too late or working when I need to be resting.

I've heard it claimed that TOU pricing discriminates against working people, especially working parents who are over-burdened and pressed for time. Naturally I would oppose any scheme that redistributed a burden downward. But I haven't been able to figure out how TOU pricing unfairly burdens one group of people over another.

Overall, lower-income people are being walloped with cost increases from every side, and incomes never keep pace with the ever-escalating cost of living. I'd love to see energy use priced on a sliding scale according to income, but that will require a revolution. Instead, we have a few tax credits and rebates to help working people recover a few costs.

But specifically, how does TOU - as opposed to the current uniform rate - unfairly affect working people?

Weekends and evenings are off-peak, and that's when most working people do their laundry. TOU pricing would certainly unfairly burden working people if off-peak was during normal hours, but it's not. Many low-income people don't own washers and dryers, and if laundromats go to TOU rates, those would also reflect weekend and evening discounts.

If I'm missing some big piece of the puzzle, please fill me in. In general, do you think TOU is A Good Thing? Are you in favour of it? Will you change your habits to adjust?

* Note that in Ontario, many people refer to electricity, regardless of source, as "hydro". I find this ridiculous and will not say it.

** I'm aware that one can also wash dishes by hand. Since Allan and I never had a dishwasher before we moved to Canada, we feel we've paid our dues in that department. What's more, using a dishwasher actually helps us eat more healthfully and save money.
Posted by laura k at 3/18/2011 08:00:00 AM