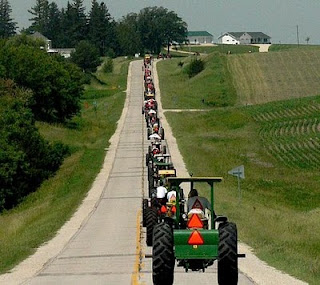 If the Wisconsin state senators who cast their surprise votes on Wednesday thought they had fired the last shot in this battle, by now they may know better. The 14 absent Democratic legislators, emboldened by relentless public outcry, are challenging the legality of the vote.

That public outcry is only getting louder and stronger, as more ordinary people recognize that they have more in common with each other than with the corporate-controlled elite. Here are two exciting and inspiring developments of the ever-growing resistance. 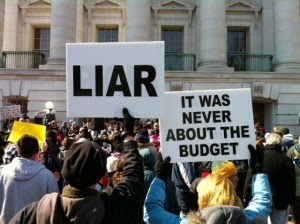 Hundreds of students at multiple Madison middle and high schools walked out of class Thursday to participate in protests at the state Capitol.

"There's been a lot of claims that we're wasting educational times and the student walkouts are counterproductive," Banks said. In response, the walkout is scheduled during the last hour and is expected to include a rally at Library Mall where high school students will discuss a Republican bill that dismantles public sector employee collective bargaining.

"The plan is to use it as a tool for education," Banks said.

Banks joined about 600 students who walked out of East High School around 10 a.m. Thursday to join protests of Assembly action on the collective bargaining bill, which was passed unexpectedly by the Senate Wednesday night.

As many as 800 West High School students also marched to the Capitol around 10 a.m., senior Jacob Fiksel said. . .

"I want to be part of stopping this," he said, adding that the students at the rally were excused from class by their parents.

Tomorrow, Saturday, March 12, members of the Wisconsin Farmers Union will descend on the capitol this Saturday - riding their tractors.

The Farmer Labor Tractorcade will bring tractors and solidarity to the Capitol to fight for labor rights and a just state budget. Rural communities will be disproportionately hurt by the cuts to education and Badgercare. Farmers in Wisconsin stand with state workers and all working and middle class families in the state. The event is sponsored by Family Farm Defenders and the Wisconsin Farmers Union. All farmers - and eaters - welcome and encouraged to come!

For more information and to learn how you can support Tractorcade, go to this Facebook page or the Family Farm Defenders website.

Meanwhile, ThinkProgress and Raw Story report that Wisconsin State Senate Majority Leader Scott Fitzgerald made a bit of a slip on Fox News: he spoke the truth!

State Sen. Scott Fitzgerald (R), the Wisconsin Senate Majority Leader, must have forgotten his talking points while appearing on Megyn Kelly's Fox News show. This afternoon he admitted on-air what many liberals have long-suspected: rescinding collective bargaining rights from state workers is Wisconsin is as much about the 2012 presidential election as Wisconsin's 2011 budget shortage.

As first reported by ThinkProgress, Fitzgerald told Kelly: "If we win this battle, and the money is not there under the auspices of the unions, certainly what you’re going to find is President Obama is going to have a much difficult, much more difficult time getting elected and winning the state of Wisconsin." [You can watch the clip here.]