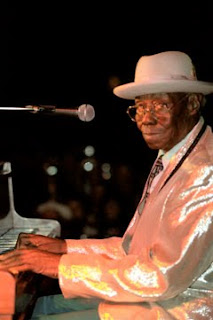 I've just learned that Pinetop Perkins died last week. Pinetop was one of the greatest blues piano players ever, and one of my all-time favourite musicians. He lived to the advanced age of 97 and died peacefully at home in Austin, Texas.

Pinetop, born on a Mississippi plantation in 1913, originally wanted to play blues guitar. Fortunately for me and so many other lovers of blues piano, he was stabbed in the arm.

Perkins was born on a cotton plantation and taught himself guitar, but his arm was hurt in a stabbing, ending his dreams of becoming a guitar man. He collaborated with Muddy Waters, B.B. King and Earl Hooker and inspired Ike Turner. Last month he won a Grammy for best traditional blues album.

Pinetop Perkins switched to playing piano after he was stabbed in the arm in 1942. His influence was vast; his pedigree impeccable.

Pinetop Perkins, a regal pianist who was one of the last of the original Mississippi Delta blues musicians, died Monday of cardiac arrest at his home in Austin, Texas. He was 97.

“He was absolutely the premier blues pianist," said Bruce Iglauer, founder of Chicago's Alligator Records, an independent blues label. “His career spanned literally over 80 years. He was the symbol of a whole generation of musicians."

Just last month Perkins' easygoing keyboard virtuosity won him a Grammy Award for best traditional blues album, for “Joined at the Hip: Pinetop Perkins & Willie 'Big Eyes' Smith." That made him the oldest Grammy winner, the honor augmenting his 2007 Grammy for his work on “Last of the Great Mississippi Delta Bluesmen: Live in Dallas" and his 2005 Grammy for lifetime achievement.

Perkins' influence was vast and his musical pedigree impeccable, for he collaborated with all forms of blues royalty, from Muddy Waters to Robert Nighthawk, Earl Hooker to B.B. King. Through it all, he maintained an enduring mastery of the piano.

Joe Willie Perkins learned about blues in the best—and the toughest—way possible: immersed in the culture that produced it.

I used to see a lot of live blues, and catching Pinetop in a band was always a huge treat. I can always identify his piano on a CD. It's easy: if you find yourself thinking, wow, that's great blues piano, so rich and deep, but not at all gaudy or show-offy, that's your man.

Pinetop lived a full life and enjoyed much success, but his passing brings an extra measure of sadness, as he was one of the last of the original Mississippi bluesmen, the very end of his generation.

He shared the wealth, too. The mission of the The Pinetop Perkins Foundation "is to provide encouragement and support for youth and young people at the beginning of their musical career; and help provide care and safety for elderly musicians at the twilight of their career." 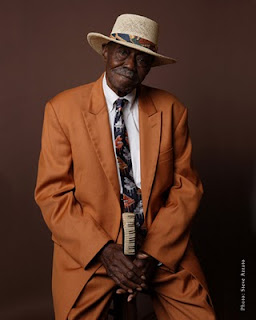