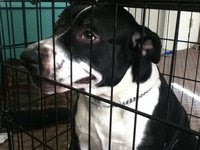 Breed-specific insanity continues in Ontario, under the radar of the media and most of the public, but inflicting lifelong pain on the families it tears apart.

Someone claims your dog is a banned breed, and it's up to you to prove she's not. And how do you prove such a thing? You can't. So your dog is taken from your home, and killed. Now, with a later amendment to the law, the dog can now be re-homed out of the province. But what will happen to the dog? And what of your family?

This almost happened to me, a week after we moved to Canada. In the story below, note the day the law went into effect: August 29, 2005. That's the day before we landed. Two days earlier, and we would have been safe. As it was, we were at the mercy of a kind Animal Services person, who may have showed leniency because we had just moved to the country.

Without this, I can't imagine what we would have done. We spent years healing Buster from the tortures he endured, and nursing him through his many chronic illnesses. To think our life with him could have been ended just days after we moved to Canada...! It's too terrible to contemplate.

A family in Cobourg, Ontario, is suffering this way right now. The dog Chaos (pictured above) has caused no trouble. He is not aggressive. He's not even a banned breed! But if you read the story carefully, you might discover what is really going on. The dog is barking. And someone found a way to fix the problem.

Stop K9 Profiling - End BSL (here on Facebook) is asking people to contact Ross Barth at Animal Services at 905.885.7808 and politely ask that Chaos be released.

Those of us who oppose breed-specific dog laws are asking for only one thing: that all dogs be treated equally. It's illegal to arrest people and lock them up because they might do something wrong in the future. (It happens, but it's still illegal.) Why can we do this to dogs?

COBOURG/PORT HOPE - Punish the deed, not the breed: that was the message of a protest Saturday in front of the Northumberland County courthouse in Cobourg.

Officers said Chaos appears to be a pit bull, and therefore falls under banned breed legislation which states that no pit bulls are to be born after the legislation was enacted in August 2005.

"So, we've got an 11-month-old dog that shouldn't be here based on what I determined as to be a pit bull-type dog," said Barth, who was acting as a result of a complaint he received.

Though the dog wasn't at the home, it was later seized at a Cobourg residence.

"I don't believe I ever had an illegal dog," Van Slyke said at Saturday's protest.

Approximately 30 people from Cambridge to Kingston took part in the rally to call for changes to the Dog Owner's Liability Act.

All pit bulls born before August 2005 were to have been sterilized, tagged and registered. Any dog born after can be seized and destroyed or sent to a research facility for animal testing.

Van Slyke said she has two dogs and is doing her best as a "responsible dog owner," but has also been informed her dogs are "interrupting the enjoyment of other tenants" with their barking.

"My dogs occasionally bark," she said. "I've been working with them to get them to stop.

"I have contacted the legal clinic and they are going to assist me in my eviction notice.

"He's never done anything aggressively other than bark and we've been working on behavioral management with him. He doesn't deserve to die just because someone doesn't think he should be where he is."

Barth said he has to act under the law when a complaint is made, and if the owners can prove the animal is not a pit bull it would be released back to them.

"I can't say whether I agree with the law or not," he said. "That's not for me to decide. The law is in place and I have to enforce the law."

Barth said nobody involved in this incident wants to see the dog destroyed, "but we know if the court decides we have no option."

Chaos is currently being housed at the Shelter of Hope on Theatre Road in Hamilton Township because Barth couldn't find another place to keep the dog.

Some shelters are shipping the dogs like this to Quebec because that province has no ban on the breed.

Barth is an animal lover himself said it's a disturbing case for all involved.

"It's breaking my heart. I had the dog in my lap. I watched the police officers doing their job and I don't think anyone of us want to see the dog taken away from its owners."

Elsewhere, anti-government freaks will bring suffering and death to countless puppies and dogs, because even the most basic, bare-bones animal protection laws are really just "government meddling" in citizens' lives.

I wrote about this back in October, when tea-party activists were trying to block legislation that would limit some of the most egregious abuses of puppy mills in the state of Missouri. Despite those efforts, that legislation passed. And now they're trying to get it repealed.

For years, Missouri earned the dubious distinction as the nation’s “puppy mill capital” because its lax humane regulations and enforcement allowed dog breeders to raise puppies at low costs in terrible, overcrowded conditions. Last fall, Missouri voters approved a referendum to finally solve this problem — the Puppy Mill Cruelty Prevention Act — which mandates regular veterinarian inspections of breeding facilities and ensures a basic level of treatment for dogs, such keeping temperatures between 45 and 85 degrees. Tea party groups stridently opposed the referendum, arguing it was “just another example of big government meddling in people’s lives.” Now, capitalizing on the big gains they made in November, Republicans in the state legislature are poised to repeal the regulations Missouri’s voters enacted. . . .

The bill still has to make it through the state House, and Gov. Jay Nixon (D) has not yet said whether he would sign or veto the bill. Editorializing against the state Senate vote, the Kansas City Star wrote that the “senators showed an arrogant disrespect for Missourians” who voted for better treatment of the animals. “The state legislature, held hostage to interests that regard dogs as just another form of livestock, has ignored the problems for years,” the paper added.

By this light, we should be well on our way to repealing child labour laws, fire codes and minimum wage laws (a cruel joke in most US states anyway).