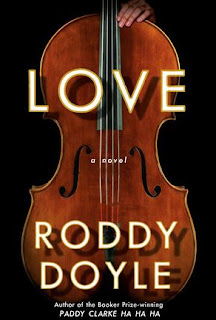 Love, the latest novel by Irish writer Roddy Doyle, is a miniature tour de force. It's a story where seemingly nothing happens, nothing that you could really call a plot. Two men who have known each other a very long time, but haven't seen each other in many years, are having a pint at a pub.

No one writes dialogue better than Roddy Doyle, and his pitch-perfect ear is on full display in this novel. As always, his Irish-tinged dialogue is funny, and sweet, and sometimes leavened with sadness. The dialogue draws you in, but it's Doyle's perfect ear for the human heart that keeps you hooked.

While "nothing happens," Love, really, is a book about everything: love, attraction, growing up, growing older, what we do and don't know, what we can and can't know, about even the people closest to us. It's about memory and language, and their varying degrees of unreliability. It's about the human condition.

I've read all of Doyle's novels, and after Love, I was left with the impression that he's never been better. This book was an absolute joy to read -- although at the end, I was weeping.

Another one to add to my list. I am half way through When Time Stopped. I think I will just take your book suggestions here on out (but not your television suggestions!).

I have to look up When Time Stopped. That's definitely not a suggestion from me.

If you read Love, let me know what you think.

Oh btw, did Prairie Fires ever get interesting again for you?

I am pretty sure it was. But do I trust my memory? Not at all.

I found parts of the last third of Prairie Fires interesting. I found the parts where Laura was writing and the on-off collaboration with Rose interesting. I still thought the parts about Rose were too long and too boring for a book about her mother.

When I was teaching copyright law, there was a dispute between the library in Missouri that LIW had named in her will and the man to whom Rose had left her interest in the books. I created an exam question on it---changing and adding to the facts to make it a decent exam. So I was interested in reading about all the issues that arose---whether Rose was a co-author, whether the transfer by will trumped Rose's transfer, and so on.

Ah, I just remembered that I sent you a review, thinking it sounded like a good match for you. Wearing my librarian hat!

What a fantastic bit of review from Rosenblatt.