"fine. biden. but this is bullshit." 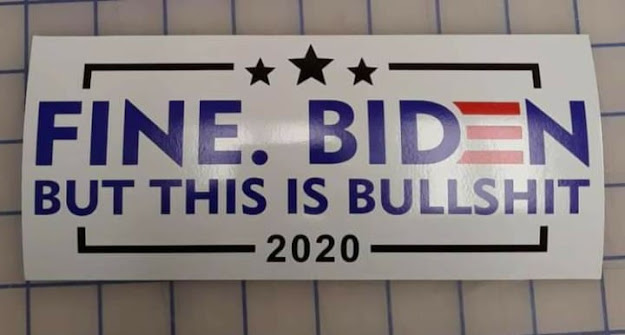 I've said it before and I'll say it again: Donald Trump is the single greatest gift the Democratic Party could ever hope to receive.

The Democrats have finally achieved their most sought-after position: every thinking person must now vote Democrat, no matter what. They can now run whoever they want with whatever consequences that will have, because the alternative is an existential threat to the country itself. Both parties, of course, have always been an existential threat to other countries, but this time every person living in the Empire is up against it.

And this will be the gift that keeps on giving for as long as the party exists. All hope of organizing and building an alternative has ended, certainly for as long as can be forecast.

All the Democrats have to do is overcome the vote suppression, election fraud, threats of violence, actual violence, and the Electoral College, and they're safe from democracy and progressive thought forever. It's no small task, but this time, at least, they appear motivated to try.

I thought Trump would never get the Republican nomination.

Then I thought Trump would never win.

And now, a third thing I thought I'd never see: Joe Biden can become the next POTUS and we'll all be happy and relieved.

When it comes to choosing not to vote for either of the ruling parties, I understand most perspectives, because I've stood at all of them at different times.

I was raised in a very progressive household, where the accepted wisdom was to vote for the most progressive Democrat in the primaries, then hold your nose and vote for whoever got the nomination. My father -- the prime political influence of my youth (yeah, the same crap dad you've heard about had great politics, as long as he didn't have to live by them) -- believed that the "democracy in the streets" at the 1968 Democratic Convention in Chicago is ultimately what brought us Nixon, the escalation of the war in southeast Asia, and everything else that came with it.

In my early 20s, I was still arguing that "a vote for x is a vote for x" -- as in, a vote for the third party candidate ultimately helps the Republican get elected.

After Bill Clinton fucked us over, I started seeing the differences between the Democrats and the Republicans as window-dressing, started caring more about building a movement for a new party as more important than enabling the second-worst corporate shills, and voting for the military industrial complex.

Besides, the Electoral College made my vote moot anyway. Voting in New York State, I didn't influence the election, so I could choose a protest vote while working to help elect the Democrat candidate in Pennsylvania and Ohio, the nearest swing states.

The blame for Trump lies in many things -- vote suppression, fraud, the Electoral College -- but above all, the blame lies with the hubris, arrogance, and essential antidemocratic orientation of the DNC, which nominated one of the most hated people in modern American political history.

We can argue all day about why people hate Hillary Clinton and whether or not it's deserved (I personally think she's the American Margaret Thatcher), but the fact is that she is hated and was hated, and she couldn't possibly have won. But the DNC was more concerned with itself and its own existence than with -- well, with anything else.

And then progressives are blamed! Supporters of Bernie Sanders! That is rich. Rather than listen to the clamour of, you know, the voters, ignore them, then blame them.

Donald Trump is the single greatest gift the DNC has ever had.

I've seen nothing to dissuade me from this belief, and everything I observe every day confirms and re-confirms it. Because now there truly is no choice. Everyone who doesn't support fascism must vote for Joe Biden.

Joe Fucking Biden! For crissakes! Joe Biden is everything that's wrong with the Democrats all rolled up into one doddering idiot. He was a ghost through all the primaries, then one day, out of nowhere, he's the man to beat and can't be beat and Bernie who, Elizabeth who? Whatever, the Dems and the media fixed it up and now we want everyone to vote for him, yay!

The one good thing I can come up with about him is that he's preparing to fight for the vote. Thank fucking christ someone is prepared to do that, after fucking Al Gore (who supposedly would be saving us from climate change right now, if not for Ralph Nader -- people actually believe that!) and fucking John Kerry rolled over like two sacks of corporate-funded jellyfish.

The normal liberal social fiddling and window dressing that bring a few well-placed victories to continue the appearance of progress. Sure, equal marriage is very important, but that heralds a more just society to the same extent that the Voting Rights Act of 1965 did.

And if we all continue to repeat the lie that progressives and third-party voters brought us Trump, we will never have to worry about the threat of Sanders or anyone like him again. (Sanders, a Democrat, by the way! Not even trying to pretend otherwise, yet we are still so threatened by him?) And I'm told that AOC and The Squad prove that it's not business as usual in the Democratic Party! Say what? Howard Dean says hi. Greetings from Paul Wellstone. From Tom Harkin and Dennis Kucinich. From whoever, they've always been there, the left-leaning Democrats, bringing the left-leaning voters into the fold, serving their powerless purpose.

I don't doubt their sincerity, and their belief that they can create change. And perhaps something entirely new will happen. If I turn out to be wrong, I'll be thrilled to admit it.

In case you're not reading carefully, I'm not suggesting that anyone who votes in the US should do anything except vote for Biden. I personally have not voted in the US since 2004 and I never will again. But those of you who do, this time there is literally no choice.

Fine. Biden. But this is bullshit.

Chomsky:
"Take Bernie Sanders. Take a look at his policies. I mean, Eisenhower wouldn't have been surprised by them. No, literally! Eisenhower's position was that anybody who questioned the New Deal was out of his mind. ... But, the Sanders proposals are pretty much – you know, they would have been considered maybe mildly liberal in the 1950s. But certainly not radical, not revolutionary. It's just the whole spectrum has moved so far to the right that they look extreme."

Any actual liberal person should be absolutely horrified and disgusted by Biden.

The Moral and Strategic Calculus of Voting for Joe Biden to Defeat Trump — or Not
By Jeremy Scahill, April 20, 2020

Very good story. I think his conclusion is wishful thinking.

Very well put! What have this world and country become....