a dark and frightening day 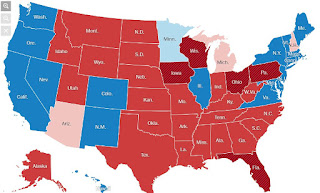 I've spent the past several months reassuring my co-workers and baldly stating on Facebook that Donald Trump would not become President of the United States.

The lesson for me and for many of us: never underestimate what angry, alienated people can be led to do. The racism, hatred, and violence that is always present in the United States, decades of hopelessness and downward mobility that have gone completely unaddressed, and a demagogue fearmonger unafraid to pander to the lowest strains of American life: and here we are.

It would appear the system is less rigged than I thought. I thought the corporatocracy that controls the US would not allow this to happen. I thought Trump's presence on the right -- a huge boon to Democrats by shutting down left-of-liberal resistance -- would also drive moderate Republicans to vote Democrat. If either of these scenarios came into play, they were not of sufficient magnitude to overcome the popular discontent and desperation.

I fervently hate the Democrats and would not have voted for Clinton (and it wouldn't have mattered if I had), but the Democrats are a known quantity. I know what they do. They make war on foreign nations, they deport immigrants and refugees, they superficially (and sometimes meaningfully) support reproductive rights and LGBT rights. They are moderately liberal on social issues, and far-right on both military and economic issues. They are a party of cats, and I expect nothing for the mouse beyond the occasional crumb.