what i'm reading: the underground railroad by colson whitehead 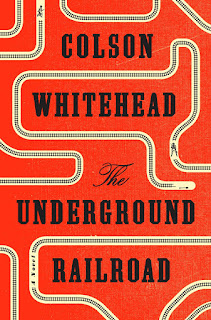 Colson Whitehead is a literary genius. In The Underground Railroad, he has found a way to tell the story of 400-plus years of African-American oppression without delivering an awkward march through history, and without using characters as billboards for ideas.

Instead of linear time, Whitehead employs a geography of time: different eras, different historical moments, occur simultaneously but in different places, all the locations connected by an underground railroad.

At one stop is something very like the Tuskegee Experiment and the "Mississippi appendectomy". At another stop, minstrel shows, the mania of genocidal lynching, and the realities of Fugitive Slave Act. At another, the vision of Greenwood, Oklahoma and other all-black triumphs like it, and the spectre of its demise.

These simultaneous realities are linked, not by the Underground Railroad of myth and metaphor, but an underground railroad. As every reviewer of this book has pointed out, Whitehead imagines an actual railroad, at once a clandestine mode of transport, and a symbol of the subterranean struggle for freedom and justice.

Through his invented geography, Whitehead comes as close to the heart of the horror of slavery and its many legacies as anything I've ever read. The physical truth, the emotional truth, the psychological truth -- all are laid bare, revealing the United States' foundation of stolen land, human chattel, and brutal subjugation, and how that has played out over decades and centuries.

To call The Underground Railroad historical fiction would be to diminish it. Whitehead is the consummate genre-shifter, never writing the same type of book twice; actually never writing a "type" at all. The Underground Railroad comprises elements of historical fiction, slave narratives, immigration stories, westerns, alternative histories, and magical realism. There's bits of Gulliver's Travels, of The Odyssey, of The Inferno. This review in The New York Times references one I hadn't thought of.

Throughout my reading, I was repeatedly reminded of a particular chapter from García Márquez’s “One Hundred Years of Solitude,” to whose handling of time Whitehead seems to owe quite a bit. In that chapter, the infamous massacre of the banana plantation workers is denied by the official versions of history and soon forgotten. But one character knows what he saw — thousands of dead traveling toward the sea on a train — and goes around trying to find someone who will remember the story. He doesn’t: People always get things wrong. In a sense, “The Underground Railroad” is Whitehead’s own attempt at getting things right, not by telling us what we already know but by vindicating the powers of fiction to interpret the world. In its exploration of the foundational sins of America, it is a brave and necessary book.

In reviews and interviews, much has been made of Whitehead's imaginative invention of an actual underground railroad, but what sets this book apart is not fantasy. Whitehead uses this magical element to confront the reality of American slavery, inviting us to consider it anew. In The Globe and Mail, Andray Domise writes:

But other misunderstandings, stubborn and pernicious, have managed to warp much of white America’s perception of slavery – that it was a matter of wage theft, that slaves were mostly treated and fed well by benevolent masters, that the Irish were treated in a similar fashion to black people. Whitehead’s novel is both speculative fiction and an inversion of these comforting fables. One in which the United States’ crimes against the Black body are revealed and compressed into the narrative of a young woman’s escape from bondage.

The Underground Railroad is a powerful and beautifully written book. Of course it's deeply disturbing, but I hope that doesn't dissuade readers from picking it up. In this age when blatantly false histories spread virally, this is a book that needs to be read.

Also, it's Colson Whitehead. Here I am again, raving about another book by Colson Whitehead. Here are my posts on: Sag Harbor, Zone One, Apex Hides the Hurt, and John Henry Days. Turns out I didn't review Colossus of New York, I only quoted from it: here and here (this blog was two days old at the time). And I read his first novel, The Intuitionist before this blog existed.