More than any ruler I can think of, Fidel Castro defies our insistence on seeing leaders as solely either good or evil. As this excellent assessment in Social Worker (UK) puts it, "History must judge him both as the freedom fighter whose defiance humiliated US imperialism and as the ruler of a repressive, unequal society."

Castro was an inspiration to freedom fighters the world over, including Nelson Mandela. Mandela, we should remember, was formerly branded as a communist terrorist, and later lionized as a cuddly hero, without having changed his tactics or beliefs.

I'm told that coverage of Castro's death by US-based media focused on the celebrations of Miami's Cuban exile community, which is exactly what I'd expect. Remember the images of Arab children celebrating the 9/11 attacks -- images that turned out to be several years old?

I don't doubt that wealthy Cubans, whose unchallenged power and prestige was toppled by a socialist revolution, despise the man who brought them down. But the mainstream US's enduring hatred for Castro has nothing to do with sympathies for the Cuban ruling class. Castro is the world leader who the US couldn't assassinate, couldn't buy off, and couldn't control. Patrice Lumumba, Salvador Allende, Mohammad Mossadegh, Jacobo Arbenz, Ho Chi Minh, Joao Goulart, Juan Bosch, Jean Bertrand Aristide -- if you don't know the names, look them up. You can go back as far as Queen Liliuokalani. Castro was the one that got away.

Castro was also a dictator. Cuba suppressed dissidents, segregated and brutally punished LGBT people, and had virtually no free speech. Saying "So-and-so did that, too!" is not an appropriate response. For a socialist to rationalize oppression because it originated on the left is shameful and indefensible.

At the same time, this is still true. 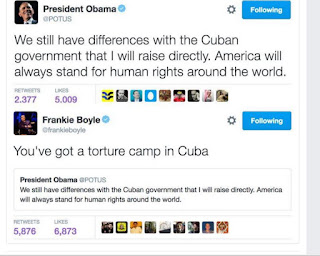 The best eulogy of Fidel Castro that I've seen was written by the great Eduard Galeano, in his 2010 book Mirrors. Here's an excerpt, courtesy of Raiot.

His enemies say he was an uncrowned king who confused unity with unanimity. And in that his enemies are right.

His enemies say that if Napoleon had a newspaper like Granma, no Frenchman would have learned of the disaster at Waterloo. And in that his enemies are right.

His enemies say that he exercised power by talking a lot and listening little, because he was more used to hearing echoes than voices. And in that his enemies are right.

But some things his enemies do not say: it was not to pose for the history books that he bared his breast to the invaders’ bullets,
he faced hurricanes as an equal, hurricane to hurricane,
he survived 637 attempts on his life,
his contagious energy was decisive in making a country out of a colony,
and it was not by Lucifer’s curse or God’s miracle that the new country managed to outlive 10 U.S. presidents, their napkins spread in their laps, ready to eat it with knife and fork.

And his enemies never mention that Cuba is one rare country that does not compete for the World Doormat Cup.

And they do not say that the revolution, punished for the crime of dignity, is what it managed to be and not what it wished to become. Nor do they say that the wall separating desire from reality grew ever higher and wider thanks to the imperial blockade, which suffocated a Cuban-style democracy, militarized society, and gave the bureaucracy, always ready with a problem for every solution, the alibis it needed to justify and perpetuate itself.

And they do not say that in spite of all the sorrow, in spite of the external aggression and the internal high-handedness, this distressed and obstinate island has spawned the least unjust society in Latin America.

And his enemies do not say that this feat was the outcome of the sacrifice of its people, and also of the stubborn will and old-fashioned sense of honor of the knight who always fought on the side of the losers, like his famous colleague in the fields of Castile.