what i'm reading: welcome to the goddamn ice cube 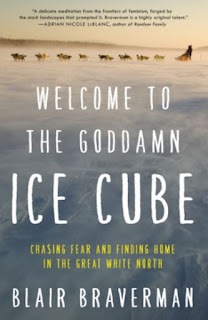 Canadians might be disappointed to learn that Welcome to the Goddamn Ice Cube: Chasing Fear and Finding Home in the Great White North is not about Canada.

We sometimes refer to Canada as the Great White North, but the Canada that most Canadians inhabit has little in common with the stark landscapes that author Blair Braverman called home. In the northernmost reaches of Norway or on an Alaskan glacier, these are lands of stark conditions -- brutal cold, perpetual darkness, and little in the way of creature comforts. They are also places of great natural beauty. Often, too, a rough world with very few women, where sexual violence always hovers as a possibility.

Braverman grew up romanticizing The North and craved it as her proving ground. She seized some opportunities and created others, to test herself in the The North that she dreamt of.

In Welcome to the Goddamn Ice Cube, we travel with Braverman to a tiny village in the north of Norway, where she works to fit in with an insular and unwelcoming local culture, to a Norwegian folk school where she learns to dogsled and survive under extreme conditions, and to a glacier in Alaska (the "ice cube" of the title), where she works as a tour guide and dogsledder.

These adventures alone would make an interesting and entertaining book. Braverman's clear, sparkling prose makes a fast and easy read. But Braverman brings another layer to her adventure story: the treatment she encounters as a young woman in a hyper-masculine world.

As an exchange student, Braverman is bullied, demeaned, sexually menaced, and finally assaulted by the father of her Norwegian host family. Frightened and without support, Braverman takes the all too common route: she blames herself. Then she takes that blame and self-doubt, and an ever-present (and not unfounded) fear of sexual violence, with her on her northern journeys.

Braverman blends these threads into a coming-of-age memoir, a travelogue, and an adventure tale.

I love dogsledding and the North from afar, so I was in awe -- and more than a little envy -- of Braverman's adventures. Her descriptions of driving a dogsled through a blizzard whiteout, or taking care of tourists stranded on the glacier, are true page-turners. At the same time, her descriptions of her dogs, and her love for them, bubble with honesty and enthusiasm. Her reflections on her relationships -- with a boyfriend who bullies her, with an elderly shopkeeper who becomes her chosen family, and finally, with a true partner -- are insightful and articulate. Braverman has a great ability to bring out one or two sparkling details that paint a vivid picture, without slowing the pace or getting bogged down in dense descriptions.

I had only one criticism of this book. The narrative jumps between different times and places. In general this would be fine, but with flashbacks and flash-forwards within flashbacks, I was often unable to follow the sequence of events. Was this before or after Alaska? Is this a subsequent trip to Norway or the same one? I couldn't piece together the timeline.

That's a flaw, but not a deal-breaker by any means. I just stayed in the present and didn't worry what happened when. By the time Braverman is ready to mentally and emotionally graduate from the tests she has chosen for herself, I was cheering for her all the way. And I hope it's not a spoiler to say the book has a poignant and very happy ending.
Posted by laura k at 11/12/2016 02:00:00 PM