steve mahoney for mayor of mississauga 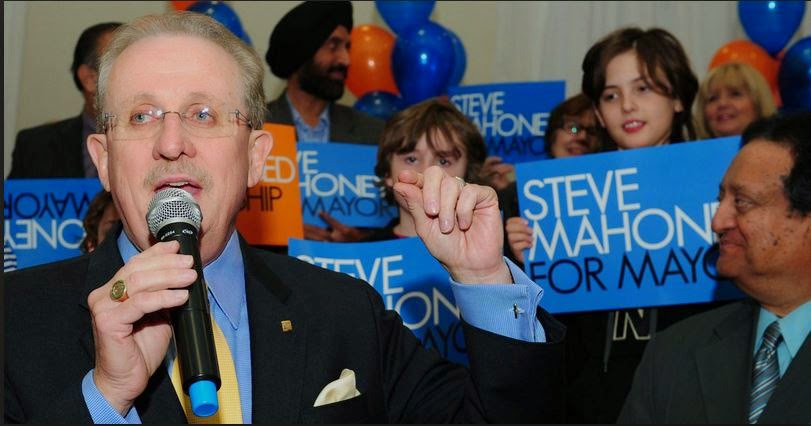 We're having a historic election here in Mississauga: it will be the first time in the city's existence that Hazel McCallion is not running, the first mayor other than McCallion that Mississauga has ever had. Twelve candidates are on the ballot, but the race comes down to two people: Steve Mahoney and Bonnie Crombie.

Crombie tries to project an image as a business person who "gets things done," but running a city like a business is a failing proposition. Businesses are designed for profit. Transit, education, libraries, sanitation, daycare, parks, recreation centres, and other public services don't generate profit. Of course, many services are not controlled at the municipal level, but the mayor has a strong voice in shaping the direction of a city, and a mayor who emphasizes "efficiency" and business experience is dreaming the wrong dreams.

Mahoney clearly supports public services. Much of his career has been focused on city planning, workplace safety, and affordable housing. As chair of the Workplace Safety Insurance Board, he was praised by both unions and businesses as fair and compassionate. Mahoney`s father was an activist with the United Steelworkers, and that, I hope, should give him a perspective on the importance of labour unions to the community.

At a recent debate between Mahoney and Crombie, it was clear that Mahoney is more experienced and more skilled, and that he has a vision for the future of Mississauga that can be put into practice. Crombie has a lot of slogans and tends to speak in vague generalities.

Mahoney, a former Liberal MP, ran against Carolyn Parrish in the 2004 federal election. Parrish made a splash in the Canadian media by strongly opposing the US invasion of Iraq, and Mahoney apparently joined the scrum against her. I'm pleased to be voting for Parrish for councillor in my ward. If Mahoney is an apologist for the US, well, nobody's perfect. I trust that will have little impact on his ability to lead Mississauga.