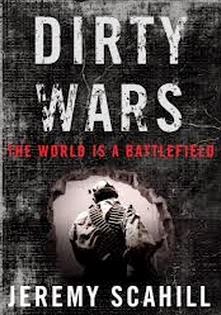 Last night we watched "Dirty Wars," investigative journalist Jeremy Scahill's documentary film exposing the United States' covert, lethal, extra-governmental operations around the globe. It's an important film. Depending on your level of knowledge of the US, it may be eye-opening, or it may be shocking.

If you have not yet seen this film, I urge you to. It's available on US Netflix and from many public library catalogs. (The website has a link to agitate for cinema screenings in your area.)

Please note I have called this film "important" and I have urged you all to see it. I have tremendous respect and admiration for Jeremy Scahill.

This post, however, is a criticism of one aspect of "Dirty Wars" that disturbed me, and undermined the film's effectiveness in my eyes. But please read this criticism in context of a documentary that is well written, well made, and incontrovertibly accurate.

We can't investigate what doesn't exist

The film opens in Afghanistan. Scahill witnesses the aftermath of a killing of a family by US "special forces", and the subsequent cover-up. Somewhat naively, Scahill pushes for an investigation, but no US official will even acknowledge that the incident took place.

The massacre of an innocent Afghan family raises disturbing questions. As Scahill follows the trail - with persistence and open eyes and more than a little danger to himself - the evidence becomes increasingly disturbing and strange. Scahill eventually discovers that there are hundreds of US military operations that exist outside the boundaries of normal government and law, beyond any democratic oversight, and out of the view of the media and the public. These are the now-infamous "kill lists" - people who US President Barack Obama and the commanders of the Joint Special Operations Command (JSOC) have decided must die. (Barack Obama was not the first president to use the JSOC kill-lists, he merely expanded the locations of special operations from 40 countries under George W. Bush to 75.)

Scahill shows how the kill-list grew from 10 names, to 52 names, to hundreds, and now thousands, as US drones drop missiles around the world, sowing new hatreds and creating new enemies for the US.

Then Scahill reveals what he calls "a watershed moment," a moment that spins him down Alice's rabbit hole, dizzies him, makes him feel he is on the precipice of the known world: the kill-list, it turns out, contains the name of an American citizen. This, Scahill says, shocks him to his core.

And this bothers me greatly.

Unprecedented? Shocking? Both... or neither?

First, is it truly so shocking that the US government will kill a US citizen; is it truly so unprecedented?The US has executed untold numbers of US citizens, either by allowing them to be murdered in vast numbers (lynching, for example), or sending them to kill or be killed for ideology and profit (Vietnam, Iraq, and so on), by using US citizens as nonconsensual test subjects to measure the effects of radiation, hallucinogenics, sexually-transmitted diseases, torture, and other horrors, and other scenes from the country's brutal past.

Second, is the fact that American weapons are killing defenseless people around the globe not in itself shocking enough? In one segment of "Dirty Wars," a Yemeni man describes the carnage he witnessed as the first to arrive on the scene of a drone attack. It is horrific. Is Scahill saying that this unprovoked attack, this carnage that rained from the sky, vaporizing whole families, is not itself the edge of the world, but the inclusion of one American citizen as a target is?

You may use the standard response: supposedly, all people care more about "their own" than about others. First, I will tell you that the belief is not universal. I can state with great certainty that I am not the only person who thinks an American or Canadian life is no more valuable, no more worthwhile, no more sacred, than the life of someone from Pakistan, Yemen, Iraq, or anywhere else.

But even if we acknowledge that nationalism is a common concern, I ask you, how many Americans actually consider Anwar al-Awlaki, as Scahill put it, "one of their own"? Between rampant Islamophobia, an unquestioned belief in the justice of the US's global "war on terror," and the constant exhortations that al-Awlaki is not only a terrorist but an emissary, an evangelist, of terror, how many Americans would feel commonality with al-Awlacki on the basis of his US citizenship? If you guessed "none," you are correct.

Scahill implies that, if Americans knew about JSOC's killing operations, and if they possessed any power to stop it, they wouldn't mind so much that their tax dollars are used to shoot cruise missiles all over the world, to kill people that have done them no harm, and ultimately making the US more vulnerable to actual terrorist attacks, but that the killing of Anwar al-Awlaki would be the rubicon they could not cross, because of this man's citizenship. No. I don't agree.

After the movie, Allan and I discussed whether Scahill is using this idea for shock value. That is, he himself does not believe that the extra-judicial killing of an American citizen is unprecedented and unspeakably horrible, but he is banking on his audience to feel that way. And that after presenting all these clearly horrible, unethical, immoral, brutal, violent acts so early on in the film, the only way to ratchet up the investment is to unveil this one last horror.

I don't know the answer to this. I'm not in Scahill's mind. But whether Scahill actually believes it to be so much worse, or whether he's counting on his audience to believe it, in my eyes, it's a mistake to flog this America-centrist, nationalist trope.

The JSOC operations are wrong. They are not wrong because there is one American name on a list of thousands. Those thousands will be exterminated. That is wrong.