the tarsands are coming to toronto: speak out on october 19 (and every day) to stop the madness 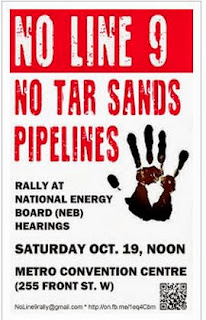 By now I hope you all know about Line 9, Enbridge's plan to transport the dirtiest, most spillable oil on the planet through the most heavily populated areas of Canada and some of the most environmentally sensitive areas of New England.

Line 9 is the third stage of Enbridge's plans to get their resource-draining, health-destroying, earth-killing tarsands oil from Alberta to the rest of the world, putting the drinking water, health, and lives of millions of people at risk in order to squeeze more private profit out of our earth.

On October 19, concerned Canadians will demonstrate outside the National Energy Board hearings in the Toronto Metro Convention Centre. The rally caps a two-week calendar of events educating the public about this insanely dangerous plan. For more immediate and excellent education, see the Oil Sands Reality Check website, which gives you the basics in a few important clicks.

The Line 9 plan would reverse the flow in two existing pipelines, causing oil to flow from Alberta through Sarnia, Hamilton, the Greater Toronto Area, Montreal, and down into New England, ending in Casco Bay in Portland, Maine - approximately 1200 kilometres (750 miles), through the most densely populated area of Canada, through the sources of drinking water for millions of people. The route passes through 99 towns and cities and 14 indigenous communities.

This is absolute madness - as are the other two Enbridge pipeline plans, now (at least temporarily) stopped: the Keystone XL pipeline from Alberta to Nebraska, and the mind-blowingly insane plan to bring huge supertankers into the rocky, island-dotted British Columbia coast.

The fossil-fuel industry and the politicians who they own (including, of course, much of the Harper Government) peddles their snake oil with lies. (Remember this map?) It's up to us to educate ourselves and each other.

My comrade Dr. J of Your Heart's On The Left gives us nine reasons to oppose Line 9. Along with the ultimate goals of protecting clean water and protecting our health, Dr. J challenges the false choice of environment vs. jobs: the fallacy that we need to destroy the environment and our health in order to provide employment.

8) demand green jobs
The billion dollars in subsidies to the tar sands each year could provide thousands of green jobs, and the climate justice movement includes labour activists pushing for a just transition from the oil economy to one based on sustainability. Last year unions endorsed a sit-in against tar sands pipelines and tankers, and this year the Steelworkers Toronto Area Council has endorsed the rally against Line 9 and provided funding for First Nations activists to bus into Toronto to join the rally. As a CAW organizer said last year, “tens of thousands of unionized and other jobs depend on healthy river and ocean ecosystems. We will be standing in solidarity with thousands of working people in BC and our First Nations sisters and brothers.” Line 9 will only produce a few temporary jobs in an industry that exposes workers to chemicals while undermining the environment on which future jobs depend. Stopping Line 9 is part of a movement demanding good green jobs for all.

If you're in the Toronto area, there will be two great opportunities to learn more about Line 9 and tarsands oil in the week preceding the October 19 demonstration.

And on Saturday, October 19, you can join the NO LINE 9! NO TAR SANDS PIPE LINES rally outside the NEB hearings.

And finally, whether or not you can attend the October 19 rally, make sure your MP and your City Councillor knows how you feel about Enbridge putting your health, your water, and your city at risk for their own private profit.
Posted by laura k at 10/11/2013 05:30:00 AM