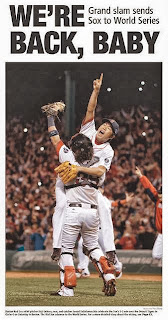 The 2013 Boston Red Sox have won the American League Pennant, and the right to play the St. Louis Cardinals in the 110th 109th* Major League Baseball World Series.

This makes me incredibly happy.