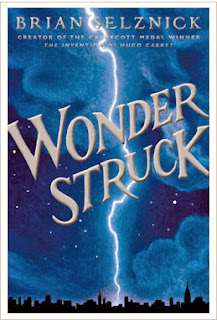 Over the summer, I wrote about The Invention of Hugo Cabret by Brian Selznick, a children's book with a suspenseful, convoluted story, lavishly illustrated with Selznick's beautiful pencil drawings. (I scanned several of those images into my earlier post.)

I've just finished Selznick's most recent book, Wonderstruck. Wonderstruck is filled with drawings in the same distinctive pencil style, but it is even better than Hugo Cabret.

The central story of Wonderstruck is more linear, so it's easier to follow. But Selznick employs a brilliant device that adds mystery and suspense to a straightforward story.

The reader follows the story of Ben, a boy from Gunflint Lake, Minnesota, who dreams of wolves, and misses his mother, and travels by himself to New York City. Interrupting Ben's story at intervals is another story, told in wordless pictures, of a girl from a different time and place - a girl who also travels to New York City on her own.

The two stories, one written in text and one illustrated, unfold independently of each other. The reader knows there must be a connection between them, but can we piece the mystery together? The two stories intersect in marvelous, poignant, and satisfying ways. The use of dual plot lines told in different formats is a gutsy choice that really respects the intelligence of the young reader.

I must admit I have an extra attachment to this book, as so many of its elements have been fascinations - or obsessions - of mine at various times in my life: wolves, New York City, Deaf culture, sign language, the American Museum of Natural History, even - amazingly - the New York City Panorama in the Queens Museum of Art, which I frequently recommend to exploring New York-ophiles. The book also pays homage to a classic children's book of an earlier era, E. L. Konigsburg's From the Mixed-up Files of Mrs. Basil E. Frankweiler.

Like Hugo Cabret, Wonderstruck is about the search for our authentic selves, our need to belong, and the creation of families, both biological and chosen. I highly recommend this book. As I tell our young customers at the library, it looks huge, but flip through it - half of it is pictures, and it's a really fast read, because you won't want to put it down.

Postscript: On the Wonderstruck website, there are wonderful essays that provide more context for the many threads of the book. Great stuff: go here.