german police recognize that they are part of the 99%, take off helmets, escort protesters 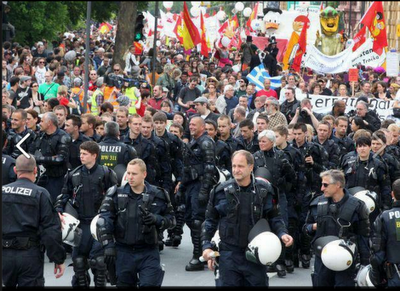 This is one of the most beautiful things I've seen in a very long time.

The German police took off their helmets and marched with the protest clearing the way for them.

. . . . German police officers escort an anti-capitalism protest march with some 20,000 people in Frankfurt, Germany, Saturday, May 19, 2012. Protesters peacefully filled the city center of continental Europe’s biggest financial hub in their protest against the dominance of banks and what they perceive to be untamed capitalism, Frankfurt police spokesman Ruediger Regis said. The protest group calling itself Blockupy has called for blocking the access to the European Central Bank, which is located in Frankfurt’s business district.

At the 2012 Marxism conference, one theme was heard again and again: how the ruling class seeks to divide us. Nonunion workers against union workers. Queers against straights. Men against women. Brown against white. Christian against Muslim. Native-born against immigrants. Police against policed.

But we recognize that what unites us is stronger than what divides us. Our job is to help others understand that all the working people of the world have more in common with each other than we do with the powerful corporations and governments that shape our lives, and we can only build resistance when we work together.