This must be a huge Skip It! for most readers, but I write this blog for myself as much as anyone else, and I must have a record of all my travels. And so...

This trip had a dual purpose - friends and baseball - and both came off brilliantly.

On Monday we had a good day's drive to Boston, with a bit of excitement (read: tension) as our dogsitter got her days mixed up and was unreachable for a few hours. Once that was settled, it was clear sailing, including at the border.

Our niece Cassie, my sister's daughter, is in law school in Boston. (Yay, new excuse to go to Fenway!) We hadn't seen Cassie for two years, and the last time was a family wedding in California, not the best way to catch up. Lucky for us, she's on light duty right now with a part-time internship, so we were able to spend lots of time together.

As soon as we got in, Cassie met us at our hotel, and we walked off to find a good place to eat. Practically the first restaurant we saw was the same place we had planned to meet Amy the next day: Yard House. This turned out to be a great choice. It's a chain in the US, although new to me, featuring a gigantic beer list (Murphy's!) and an eclectic menu. The food was much better than what I'd expect from a generic chain restaurant. Food, beer, talk. Excellent.

Tuesday morning we relaxed a bit, poked around in a nearby used bookstore, which whet our appetite for more. We met Amy back at the Yard House for a leisurely lunch and gabfest. She spends the summer on the Cape, but by fortunate coincidence, H had business in Boston that day. It was terrific to spend quality time together.

A bit later that day, we met Joe, his girlfriend "the Other Amy", and Cassie at Lir, scene of the JoS1 meetup. We've also met Joe a few times before, including when he came up to Toronto on a soccer-baseball road trip. Joe's girlfriend's dad has Red Sox season tickets, and we were all going to the game together. Cassie was nearby and popped over to meet us for dinner.

Joe works for the state-run medicaid program, and I learned something about the red-tape jungle of state-run health insurance in Massachusetts. It couldn't be more different from our experience in Canada. In Ontario, there is only one question: are you a legal resident of the province. If so, after a waiting period and proof of residency, you receive your health care card. Everyone has the same benefits. Payment is calculated when you file your income taxes. The end. (Of course, our excellent public health care system is under huge threat of privatization, both from the Harper government and the McGuinty provincial government. But that's a story for another post.)

Joe, Other Amy, Allan, and I went to the game. The seats were terrific, and - as always - it was so wonderful to be at Fenway. It is simply the best ballpark, anywhere. I've said that since my first time there, in 1987, when I was still... you know. Since then I've been to many ball parks, and Fenway is still unrivaled.

On our last Boston trip, JoS1, we saw two terrible losses, so we were reeeeally hoping to see at least one win this time. On Tuesday night, the Sox breezed to a 5-7 win that never felt as close as the score might seem. The Marlins' Logan Morrison was responsible for all five of Miami's RBIs. With that name, he should play for the home team. 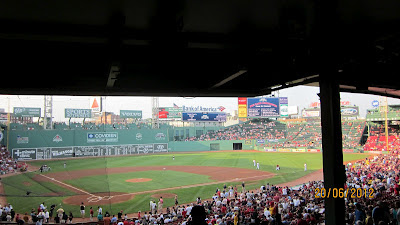 At the game, I had the brilliant idea of asking Joe about used bookstores in Boston. He's a Boston native and, like us, a reader, and an urban explorer. He gave us more ideas than we'd have time for. So now I know two things that the city of Boston has all over New York. New York City has lost most of its used bookstores to skyrocketing rents. Myth has it that used and indie bookstores closed because of the Barnes & Noble superstore invasion. But if rents were anywhere even approaching affordable - that is, if there was commercial rent control - at least some of those independent booksellers might have survived. They certainly have in Boston.

(A note to NN, who blogs about bookstores: a trip to Boston should be in your future. The world's first public library, bookstores galore, and a slice of baseball heaven for your sports-loving partner. Why not go this season, while tickets are cheap and plentiful?)

MattyMatty, a JoS regular, stopped by to say hi. As we were leaving Fenway, someone recognized Allan's unusual t-shirt, and introduced himself with his SoSH handle. Allan said "Joy of Sox," and the guy said "Allan!" and shook his hand. Funny.

Also at the game, more evidence (although none is needed) of the militarization of American culture. Our friend Jere had tipped us off to this, and it unfolded exactly as he said. At every game, the Red Sox honour a "kid hero" of the game (random cheering and applause), a blood donor of the game (golf clap), and a military person of the game, who is "protecting our way of life" (loud, sustained applause, standing ovation). Thus someone who literally gives of themselves to help save the lives of strangers is held in lower esteem than someone who goes to foreign lands to kill strangers.

On Wednesday morning, Allan and I ditched the horrible hotel freebie breakfast and jumped on the T to Copley Square. It was only 8:00 and already stifling from the heat. The weather on Tuesday was mild and breezy - perfect baseball weather - but we knew a few scorching days were ahead.

We had breakfast at boLoco, a Boston-area burrito chain featuring locally-sourced ingredients and compostable everything - and perfect breakfast burritos. Many stars for boLoco, I would definitely go back.

After breakfast, we waited (in the shade) for BPL (the Central Library of the Boston Public system) to open. Allan went off to do research, and I poked around a little bit, discovering a beautiful quiet cafe and an even more beautiful, quiet inner courtyard. 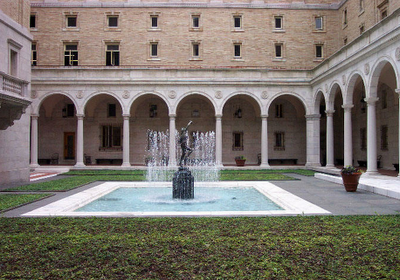 Soon after, I met Cassie a few blocks away for Boston's most touristy activity: a Duck Boat tour! By now it was sweltering - the temperature was in the high 90s (more than 35 C) and humid. Even sitting still in the shade, I was melting.

The duck boat tour was really fun. It's a quick 80 minutes, full of corny jokes and kitsch, but also full of history, architecture, and beautiful views. It's strange (and fun) to be on a bus that drives into the water and turns into a boat. 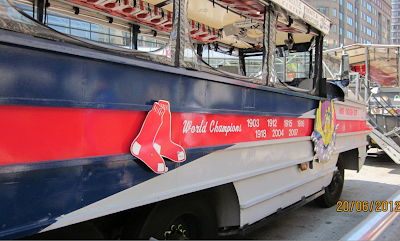 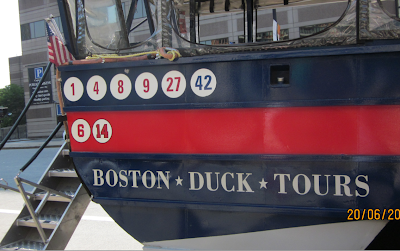 We weren't on this boat. I just liked the detailing. 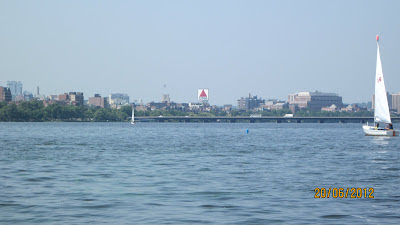 This was the only photo I took from the boat that's worth sharing. If you have to ask why, you don't care.

By the time we finished the boat tour at around 11:30, the temperature was in the high 90s, maybe 37 C. Another nice thing about Boston: iced coffee is everywhere. (Ontario, when will you learn about iced coffee???) So Cassie and I sucked down iced coffees and met Allan back at BPL. Then it was off for our bookstore crawl.

We started at Brattle, which resembles New York's Strand, although smaller. There are tables of bargain books outside, a mural of authors looking down on you as you search the tables of $5, $3 and $1 books. Inside, there are two floors of used books, and a third floor of rare and antiquarian finds. Excellent store. 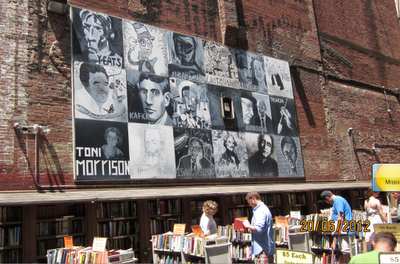 From there, we took the T to Cambridge. From the sizeable list Joe gave us, we easily could have done the whole used-book store crawl in Cambridge, but we wanted to check out Brattle first. We first visited Rodney's. From the website, it appears to have a canine connection, but we didn't meet any dogs there. Nevertheless, it's a beautiful store of used and remaindered books, and incredibly inexpensive greeting cards, note cards, and posters, many handmade.

After that, we jumped on the T again - the high heat and humidity not conducive to walking - and went to the Russell House Tavern for a lovely lunch, courtesy of my sister (Cassie's mom).

Then it was on to Harvard Bookstore. Unrelated to the school, this must be one of Boston's best bookstores. On the ground floor, it's an interesting independent bookstore with a great selection and good discounts; in the basement, it's a rabbit-warren of used books.

Given more time and less heat, this could have continued for several more stores, but Cassie and I were both collapsing. (Allan had to be pried from the store.) So it was back to the hotel for air conditioning and showers, then Cassie and her good friend H met us for our second game.

Having seen one win, of course we wanted another. The Red Sox obliged, and then some, hitting four home runs, including a quadrangular from Big Papi, the capper of the whole trip. Final score 15-5.

Jere from A Red Sox Fan From Pinstripe Territory and his partner Kim from Stella Marie Soap came by to say hi. It was great to finally meet Kim in person! Jere had recently been to Cooperstown, and he brought us back this adorable gift! 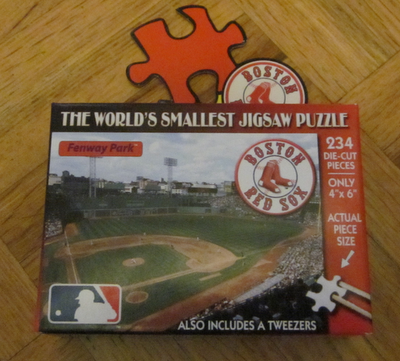 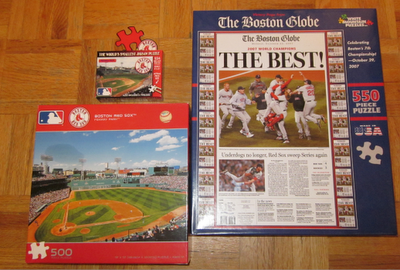 Kat, another JoS friend, sent me two Red Sox-themed puzzles last year, and Jere - a careful reader and a thoughtful guy - remembered that I'm on a puzzle kick.