the only good bargaining is collective bargaining

From time to time, I sell things on Craigslist and Kijiji. I've given away scads of things on Freecycle, including, when we were packing up to move to Canada, a huge air conditioner, bedroom furniture, a couch, and other items considered gems by Freecyclers. But right now money is tight and I'm not feeling as generous, so I go the Craigslist/Kijiji route. I get rid of stuff we don't need, someone gets a good deal, and I get a little extra cash. Everyone wins.

My constant irritant is The Bargainers. I dislike bargaining and I don't want to do it. I include the phrase "price is firm" in my ad, but that doesn't stop the Bargainers. Some are polite: "Would you accept $40?". Many are downright demanding: "I will pay $30. Give me your phone number.". I don't care. The more they insist, the less I want to play the game. 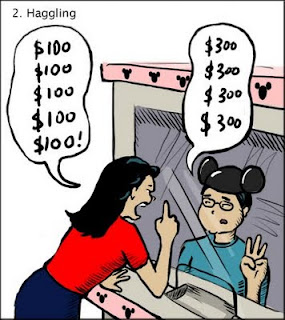 The whole concept of bargaining runs counter to my preference for direct communication. First, state a fictitious price, merely a device used to begin an opaque but predictable process. The "real" price is obscured. The two parties engage in... what, exactly? A predictable dance? A test of wills? A bit of theatre? All of the above? To my mind, it's a useless exercise. When I shop, I want to know the price of an item - the real price - then I can decide whether or not I want to buy it.

It's not that I don't understand the language of bargaining or don't know how it's done. I have bargained successfully in the past. I don't wear a watch, and before the advent of cell phones, I used to carry a very small travel clock, similar to this. I'd buy them in one of the many cheap electronic stores that used to fill midtown Manhattan. Typically, there were the posted prices - also known as "tourist prices" - and the real prices, which were never posted. I could always buy a little clock for $20. Sometimes the posted price was as high as $35 or $40, but I could always get one for $20. In those days, I found it kind of fun, a cheap thrill, an affirmation of my status as Real New Yorker. So it's not that I can't bargain. I just wish no one did it. These days, even if I lived near a little electronic shop filled with tourist prices, I'd go to Best Buy, where the price is the price. (Although many people would dispute even that. Among the zillions of books and websites preaching Thou Shalt Haggle, there are even instructions on how to haggle at chain stores.) To some people, a lowered price is an accomplishment worth any amount of time. I want to go in, buy what I need, and get out.

I understand that for some people, there is a cultural imperative to haggle. But there's no law that says I have to adopt other people's cultural practices. Many people claim that in certain countries, one is expected to bargain, a supposed truism most budget-travel guides emphasize. But is it necessary? Is it fair? In Peru, we saw hundreds of people selling the exact same item. In a glutted market, prices were ridiculously low. Our dollars went so far there, we could afford anything we wanted. Perhaps the price after bargaining would be $5 or $10 less. In the context of how much money we spent on that trip - in context of our privilege of travel - that is a pittance. But to the seller, an extra 15 or 20 nuevo soles could make a very real difference. If someone wants to laugh at the gringa who paid the asking price, why should that bother me? (In Peru, I don't think anyone thought us fools. I think rich, haggling tourists were regarded with annoyance. But perhaps I was projecting.)

One day we may travel in a country where I'd be truly foolish not to bargain. But that country is not Mississauga. With my Craigslist sales, it's gotten to the point where I obstinately refuse to bargain. It would be simpler just to slightly raise my asking price, then take the Bargainer's offer. But I'm incredibly - irrationally - resistant to this. The more insistent and demanding the Bargainer, the more I resist.

I am selling an Oreck steam iron. It is brand new, been used once. It retails for $50 or $60. I am asking $25. Here's a recent exchange, copied and pasted unedited from my emails.

Bargainer: $15 cash and will pick it up tonight call me thanks

Me: Thank you for your email. The price is firm at $25. Please let me know if you are still interested.

Bargainer: i'm a serious buyer will be there tonight $20 cash final offer [He repeats "cash" as if there is some other means of purchasing items on Craigslist.]

Me: I'm sorry if anything in my email gave you the impression I am bargaining. The price is firm at $25. Thank you.

Bargainer: i only have $20 but i will be there tonight what is your address

I recently sold a piece of exercise equipment for $50. A prospective buyer asked, "Would you accept $40?" I replied, "No thank you, the price is firm at $50. Let me know if you are still interested." She was. She pulled up to the house in a BMW, and took cash out of a Coach wallet, her hand well-manicured and glistening with bling. But she tried to get $10 off the asking price.

A long time ago, when I was newer to Canada, I blogged about the indirect communication I was sensing from co-workers and neighbours. I like people to say what they mean, and mean what they say. Good or bad will between neighbours shouldn't depend on following a secret code, especially if we have no idea if we're even carrying the same codebook. The price of an item shouldn't depend on my ability to wrench a different price out of the seller.

Collective bargaining is the opposite of haggling

Neither should my salary. Widening the lens, when you work in a private-sector, non-unionized environment as I do, a similar dynamic exists during the interview process. Prospective employers want to know your "salary expectations". You try to aim high, expecting to be low-balled. I have managed to wring a few extra dollars out of an employer, then was forced to sign a confidentiality agreement, so my co-workers wouldn't know how badly they were getting screwed. (I violated it.) I have an idea. Tell me what the job pays for someone with my level of experience. Pay everyone with the same job with the same level of experience the same pay. 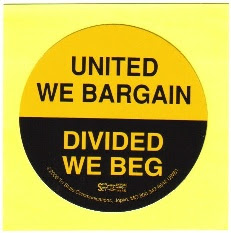 I recently reviewed the collective bargaining agreement between CUPE Local 966 and the Mississauga Library System. You know what the best part of that agreement is? The fact that it exists. The fact that a bunch of people representing all the employees and a bunch of people representing the employer sat down together and hammered out a contract that both parties can live with. Neither party, presumably, got everything it wanted. Both parties, presumably, feel satisfied with the results. And those results are there for all to see. The codebook is public information. And because it is, when I am hired by the Mississauga Library System, my salary won't depend on my ability to talk the Library into an extra dollar an hour, and to get that extra dollar I won't have to give up half my benefits. I won't have to face my employer alone, each of my co-workers equally alone, each of us fumbling in the dark, forced to take whatever the employer offers, fooled into believing it's the best possible deal, cowed into believing we're lucky just to have jobs. My pay and benefits will all be known in advance, and will have been negotiated in part by someone representing my own interests.

When I was writing professionally, whenever I'd balk at some horrible rights-grabbing contract, I always heard the same thing: No one else has complained. All our other writers have signed this. No one has ever mentioned this is a problem. We had no idea. Every single editor or publisher I worked with said this. Too bad for them that I belonged to the National Writers Union. I already knew that hundreds, maybe thousands, of writers had complained, had refused to sign, had insisted on changing language. I knew I wasn't alone, so it was easier to stand my ground. I didn't always win, but it was always worth trying - for myself and for all the other writers who were also trying to negotiate more equitable contracts.

Alone, we are helpless. What leverage did I have against Time Warner Media or Hearst Communications? The same leverage I have with my current employer: none. As a group, united - or even armed with a bit of information - we might be able to win a bit of justice.

It's one thing to hear employers bad-mouth unions. If it weren't for organized labour, employers wouldn't be bothered with profit-draining bits of socialism, like weekends, paid holidays, workplace safety provisions and a minimum wage. I understand why they don't like unions. But when I hear working people parrot the "unions were once necessary but they've outlived their usefulness" line, I want to scream. Apparently they don't understand that if it hadn't been for the labour movement, we'd be living in those "once necessary" times right now. Much of the world still is. Labour unions are needed - right now, right here, in North America - as much as they were in the 1920s or the 1850s: a fact Ikea has just learned, Rite Aid has learned and Starbucks may soon learn.

Update on haggling. After chatting in comments, I feel I may have failed to make my central point. The reason I dislike haggling isn't the attitude of hagglers - it's the unfairness to the buyer. I want everyone to be offered the same price for the same product, regardless ability or inclination to haggle. As Allan put it: People who are shy or hesitant are penalized for who they are. They may end up paying more for items and also earn less at their jobs.
Posted by laura k at 7/31/2011 11:24:00 AM