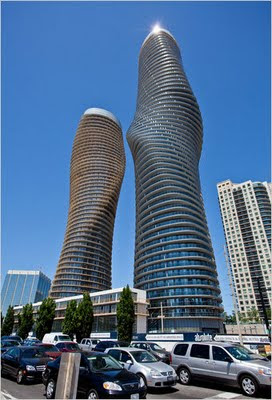 These sexy buildings are right down the street from us. Allan and I both like them a lot, and have watched their progress in the Mississauga skyline with interest. Apparently many people have been doing the same. From the New York Times real estate pages:

People looking for the latest in twisting, gravity-defying architecture might start with the international cities of the Middle East or China, but you wouldn’t expect them to look here, in the suburbs outside Toronto.

But the first residents are moving into an extremely curvaceous, 56-story condominium tower in Mississauga, a city of about 738,000 people. The skyscraper, called the “Marilyn Monroe” by locals for its voluptuous curves, was the result of an international design competition initiated in 2005 by the tower’s development company, Fernbrook Cityzen.

Now, joining London’s spiraling Gherkin building and New York’s rippling 8 Spruce Street is Mississauga’s buxom Absolute tower — or rather, two of them, both designed by the Chinese architect Ma Yansong, assisted by his partner, Qun Dang. Sales were so brisk in the 428-unit “Marilyn” tower that the developers asked the architect to deliver a second, 50-story high-rise with 433 units.

This second high-rise also spirals asymmetrically, but not quite enough to steal the limelight from “Marilyn.”

The buildings were the final two towers to be developed in a five-tower condo complex, called Absolute World, built at Mississauga’s main intersection, across from the Square One Shopping Center, one of the largest shopping malls in the Toronto region. The first three towers were of more conventional high-rise design.

Mr. Ma, a founder of the MAD Architectural Design Studio in Beijing and a Beijing native, said he’d never heard of Mississauga when he discovered the design competition online in 2005.

However, he had spent several years studying in Yale University’s architectural program, so Mr. Ma said he had in mind a generic midsize North American city.

“I was imagining Mississauga as a city aiming to become Chicago or Toronto, with a lot of big towers, in the future,” he said.

Yet instead of designing a rectilinear structure, Mr. Ma decided to create something that was a bit softer and more livable.

Mr. Ma said he loved the anthropomorphizing “Marilyn” nickname, which distinguishes his structures from the world’s other twisting towers, most of which are too geometrical for his tastes. A truer analogue might be Prague’s Dancing House, originally called “Fred and Ginger” for its sinuous qualities, evocative of the dancing pair. It was designed by Frank Gehry and the Croatian-Czech architect Vlado Milunic.

The unpredictable bulges of Mr. Ma’s skyscrapers, which have a slightly different appearance from every angle, created huge challenges for the towers’ builders and engineers, which translated to financial challenges for the developers. Most skyscrapers are built on straight lines for a reason: they’re more efficient to build that way.


Hazel McCallion, Mississauga’s mayor, said it was unusual for a city struggling to build an identity through its architecture to look to a residential condominium developed privately. Typically, cities promote public projects, such as museum or opera house, which in fact Mississauga did with its architecturally distinguished City Hall, which opened in 1987, the result of a national architectural competition.

“What we’ve clearly demonstrated to all the developers that want to build in our city core, and throughout the city, is we want, if possible, architectural competition, because this is just a leading example of what can be accomplished,” she said.

I guess our "generic midsize North American city" has arrived!

True to form, as far as I can tell, most Mississauga residents hate these buildings, just as they hate their architecturally interesting City Hall, also the winner of a design competition. The extreme, almost universal dislike for City Hall completely baffles me, as the design doesn't strike me as particularly far-reaching or eccentric. But hey, conservatism in any area baffles me.