This past week, the Toronto chapter of the War Resisters Support Campaign hosted a fundraising dinner at the United Steelworkers Hall. These dinners, which we hold four times a year, are informal gatherings of friends and supporters, with music, campaign updates and a simple meal. Our turnout this time was better than we had anticipated - we had to set up an extra table - and the final fundraising total topped all expectations. As terrific as that is, the evening brought us so much more than money. Affirming that our supporters are still steadfastly behind us, urging their country to be a safe haven for men and women who refused to participate in the illegal invasion and occupation of Iraq, brings us joy and hope.

Bruce Beyer is a war resister and peace activist living in Buffalo, New York. Bruce came to Canada during the Vietnam War, lived in Sweden (the other country that welcomed US war resisters) for a time, and eventually served time in prison. Bruce, his wife Mary and their daughter Elizabeth work for peace and military resistance, through both Veterans for Peace and the Western New York Peace Center. The Beyers came to Toronto for our dinner this week, and Bruce wrote a reflection on the evening. It was published in the Buffalo weekly ArtVoice, and I have a copy to run here, too. 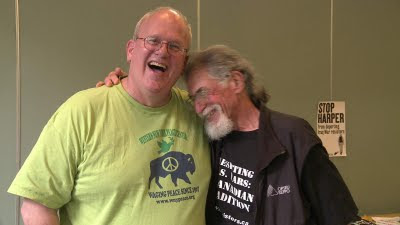 Bruce Beyer (l) and John Liss (r); Beyer and Liss met in Buffalo in 1967, a few months before Liss fled the US in protest of the Vietnam war. When Beyer left the US in 1970, Liss was living underground in Montreal, and helped Beyer get to Sweden. On Wednesday night, the two peace activists were reunited for the first time since the mid 1970s. Photo: A. Lisman

In a large, three-story brick building, nestled into a shaded residential neighborhood two blocks from Spadina Avenue’s bustling Chinese community, 60 people gathered to show their support for the War Resisters Support Campaign (WRSC) on Wednesday evening, June 29. Housed on the third floor of this Canadian Steelworkers Union Hall are an array of peace, justice, and human rights organizations, including the WRSC office. The Canadian Steelworks Union has been a long-time supporter of the call for humanitarian asylum for American soldiers seeking refuge from American interventionist war. (FYI: The American Steelworkers Union recently gave Iraq Veterans Against the War a $10,000 grant to help fund their Wounded Warrior Project.)

This Canadian union doesn’t just give lip service to Iraq war resisters. They are actively involved in financially supporting the WRSC efforts to win asylum for Americans who, for reasons of conscience, have refused to continue to participate in the war and occupation of Iraq. By helping to underwrite rent, telephone expenses, and printing costs, the steelworkers have stood squarely behind the efforts of the campaign, as have many other progressive Canadians. On this gorgeous June evening, as the bustle of Toronto streets began to subside, my wife Mary, our daughter Elizabeth, and I joined with Vietnam era draft resisters and deserters, Iraq war resisters, Quakers, Bradley Manning supporters, and stalwart members of the campaign to share a simple and delicious meal.

The purpose of the evening was to raise much-needed funds for the campaign’s ongoing efforts but it turned out to be an evening of far greater importance.

There were no “hard rock speeches” just a simple sharing of support and information. The event began with the introduction of recently reelected Parkdale New Democratic Party (NDP) Member of Parliament, Peggy Nash. Ms. Nash represents the riding (electoral district) with the largest concentration of Iraq war resisters in all of Canada. She spoke of the NDP’s solidarity and support of Iraq war resisters and took the time to thoughtfully answer questions. We were entertained by the lush songs of long-time campaign supporter Sara Marlowe and the beautiful vocals of Kimberley and Alyssa Manning. (Alyssa is the amazing attorney who so ferociously represents Iraq war resisters.)

As a Vietnam era draft resister, I am drawn to support Iraq war resisters simply as an act of solidarity. In each of the resisters I have come to know over the past seven years, I see a bit of myself, my parents, and so many other Vietnam era resisters. I know what my refusal cost me and my family. I know only too well what it is costing these young, courageous resisters to the Iraq war as they struggle to survive in a political and legal limbo with such far-reaching international repercussions.

Imagine living your life under the threat of being deported and jailed. How do you maintain a balance between living and fear? How do you survive the pressure of supporting yourself or your young family and maintaining a positive outlook? If you are like Jeremy Hinzman, you’ve been doing this for the last seven years, every day, every week, every month. At any moment, each of these resisters may be ejected from Canada and thrown into some US military gulag to be harassed and punished for refusing to kill people.

To sit in a Canadian union hall, with a roomful of Canadians who have come together to raise funds to support a group of young American war resisters is absolutely without parallel. These Canadians have wrapped their arms around our sons and daughters! On every level, emotionally, spiritually, and financially, they have given their love and support to these courageous young military veterans who have chosen to lay down their weapons. They have asked nothing from their American counterparts.

We cannot let the Canadian people carry the support of our resisters alone. Iraq war resisters are in Canada, jailed, or living underground for us. We must be here for them!