reproductive justice and the limits of polls, part one

I attended a terrific meeting last night called "Harper's Attacks on Reproductive Rights at Home and Abroad". The room was packed with people of all ages and from many different communities - university students, women's health workers, socialists, veteran choice activists and those new to the barricades.

When the meeting began, there was a buzz about the recent Globe and Mail article showing the results of a new Nanos poll on Canadians' opinions on abortion.

Canadians believe that women in countries that receive aid from Ottawa should have access to safe abortions, according to new polling data which hints at a political risk for the Harper government in promoting a maternal health initiative that omits abortion.

In the poll by Nanos Research 67.7 per cent of respondents said women in countries receiving Canadian aid should have the same access to safe abortion as Canadian women.

A related Globe story showed that a large majority of people polled in every province believe that women need access to legal, safe and free abortion, ranging from a whopping 88.8% in Quebec to 69.5% in Alberta and in the upper 60 percents in the Atlantic provinces.

This is excellent, and it is a distraction.

Such strong polling numbers are important because they demonstrate that women's reproductive freedom is a mainstream Canadian value, and that the Conservatives tamper with this at their great political peril.

It shows the broad mainstream base behind the small activist voice currently agitating to ensure that reproductive rights in Canada do not backslide, whether through wholesale dismantling or through the stealth, piecemeal chipping away of rights.

And the poll numbers show the strong public opinion we can tap into as we organize around reproductive rights issues.

But our right to control our own bodies should not depend on public opinion.

Our rights to sex education, contraceptives, abortion, prenatal care - our right to control if and when we have children - should not be a function of majority opinion.

In countries where, because of a particular social, political, cultural milieu, public opinion shows strong opposition to contraception and abortion, women still have the right to control their bodies.

And if one day someone comes up with a poll that shows, say, 45% of respondents in such-and-such province oppose abortion rights, 100% of the girls and women in that province still have the right to reproductive freedom.

But the support is there and we must organize it.

This Saturday, at the main G20 protest march - "People First! We Deserve Better" - women will lead the march, carrying a giant coat hanger, both in protest of the Harper government's exclusion of abortion from their so-called "maternal and child health policy" and to say, as Canadians, WE WON'T GO BACK.

This decision was made and endorsed by all the organizing bodies - the Canadian Labour Congress, Greenpeace, Canadian Federation of Students, Oxfam Canada and the Council of Canadians - and it's an exciting development.

Every woman is invited to stand at the head of the march, in a demonstration of strength and solidarity with women around the globe.

The peace march feeding into the main march begins at 12:30 in front of the US Consulate, 360 University Avenue.

The main march will begin at Queen's Park at 1:00. 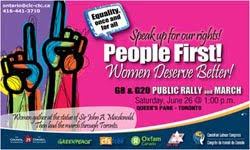 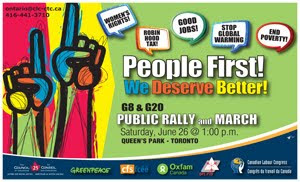