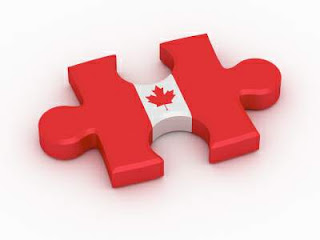 The final piece is in place: we are Canadian.

We said the oath, which I still find très bizarre - but then again, I find the whole concept of nationality, citizenship and loyalty oaths antiquated and fairly unnecessary. On the other hand, we recited the oath in both official languages, repeating the French phrase by phrase after the presiding judge, who was herself an immigrant once, probably from China.

In case you're wondering, I cried. Of course I cried. This represents the culmination of so many plans and dreams and so much hard work and waiting. It represents my final disengagement from the United States (although I am still a US citizen and will remain so, at least for the foreseeable future).

From our experience when we took the test wrote the exam, we knew there would be no time to celebrate afterwards without missing part of the Red Sox game (as if), so I suggested a good alternative: celebrate before! We went to The Brogue in Port Credit, the scene of our first pint and lunch in Canada when we came up to look at apartments, and from which we ended up living a block away for our first year. A couple of pints before a citizenship oath - that's a requirement, isn't it?

Every New Canadian at the swearing in received a little paper Maple Leaf flag, a bookmark with the lyrics to O Canada in both English and French, and a little booklet commemorating the day. Everyone recites the oath together, then each person is called up individually to receive a certificate and shake the judge's hand, then signs the loyalty oath as a legal document.

The citizenship certificate, unfortunately, is signed by my two least favourite Canadians: Stephen Harper and his sidekick, the Calgary Doughboy, Jason Kenney. In fact, Kenney's name was all over this day. But fortunately, he was not there in person, so I didn't have to execute any of our plans for public dissent.

So, this is it. Next step: passports, then voting. Can't wait!

Many, many thanks to everyone for all your love and support.

Impudent Strumpet is sending people here to congratulate us! I'm totally abashed. But I figured I'd better make a spot in case anyone took her up on it.