Citizenship and Immigration Minister Jason Kenney was in Halifax this morning to promote the government's anti-refugee bill. Some folks from No One Is Illegal Halifax were there to greet him. 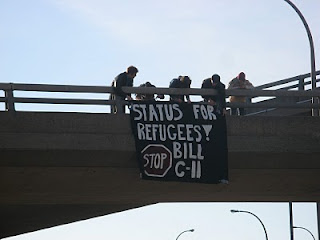 From No One Is Illegal:

HALIFAX -- Early this morning, migrant justice activists dropped a banner reading "Status for Refugees: No to Bill C-11" from the Cogswell interchange, in protest of the refugee reform bill currently being debated in parliament. The protests came in response to a visit by Minister of Immigration and Multiculturalism Jason Kenney, who is responsible for the proposed reforms.

"Already people are falling through the cracks in the refugee system and are deported to unsafe situations" says Jane Kirby, a member of No One is Illegal-Halifax. "These reforms will only impose further hardship on those who are fleeing unsafe situations".

The proposed reforms would create a two-tier system for refugee claimants based on their country of origin, limit the availability of mechanisms like the Pre-Removal Risk Assessment and Humanitarian and Compassionate applications to refugees, and process claims so quickly as to deny refugees adequate preparation.

"It's the people who face real risks who will suffer most from these 'fast track' reforms. It makes it harder to be accepted as a refugee in Canada, which is already difficult", says David Parker of No One is Illegal, who also criticizes the streaming of refugee claimants based on their country of origin, such that those from so-called safe countries would be denied appeal and have their claims fast-tracked. “This erodes the whole concept of justice by allowing non-judges to determine a refugee's risk not based on the individual, but based on origin. This is discrimination, and is unacceptable for a country that claims to uphold human rights”.

Critics also disagree with Kenney's claim that these reforms are necessary to combat “abuse and a backlog” in the refugee system. “This backlog was created by Kenney and the Harper government when they delayed appointments to the Immigration and Refugee Board in 2006 and 2007”, says Kirby, a member of No One is Illegal-Halifax. “Kenney created this crisis and cannot be trusted to fix it. Refugees should not be punished for Kenney's mistakes”.

Grassroots activists across the country have called for Jason Kenney's dismissal. He is best known for his appointing of a known anti-gay activist to the Immigration and Refugee Board, his barring of British MP George Galloway from Canada because of his support for Palestine, and for his frequent inflammatory and anti-immigrant comments. He has also overseen the largest immigration raids in Canadian history, including a large raid in a mall in West-End Toronto earlier this week.

In Halifax this past March, a man from Eritrea committed suicide upon hearing that his refugee claim was rejected. In December 2008, a young woman was murdered within months of being forced to return to Mexico, after applying for asylum in Canada twice. This came as Kenney was imposing visa requirements on Mexicans, claiming that they were bogus.

“These stories are not that uncommon”, says Kirby. “We should be putting the needs of people first, and opening our borders to immigrants and refugees, not closing them”. 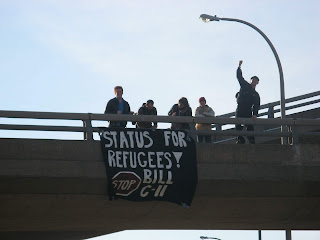