worlds collide: more notes on "gods of the upper air"

Gods of the Upper Air, by Charles King, which I recently wrote about, highlights several books that were highly influential in their time, for good and for ill.

In The Passing of a Great Race, published in 1916, a man named Madison Grant foretold the extinction of the "Nordic" race and their descendants. Drawing from the pseudoscience of the day and bolstered by (as King puts it) "the steely assurance of a New York patrician with something to say," Grant warned how "subspecies" of humans would populate the United States and drive out the civilized classes. These subspecies included Irish, Italians, Greeks -- any non-Nordics, and of course, Jews. In those days, there was no race called white -- further proof that the concept is a social fiction.

The Passing of a Great Race was hailed as a milestone in the application of scientific ideas to history and public policy. It inspired an entire generation of acolytes who would go on to write their own treatises, advise policy makers, and push through new legislation. Three-quarters of American universities, from Harvard to the University of California, introduced courses on eugenics, many of them using Grant as a primary text. Lothrop Stoddard -- a young, well educated New Englander who was frequently grouped with Grant among America's most reliable racial scientists -- went on to write the best-selling The Rising Tide of Color (1920), which warned of racial inundation by the dark-skinned, and The New World of Islam (1921), which surveyed the threat to the West of a "Mohammedan revival" among Arabs, Turks, and Persians. 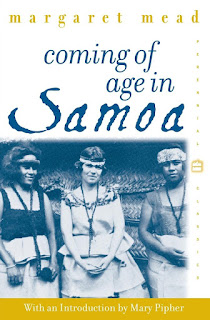 Later, on the other side of the spectrum, Margaret Mead's Coming of Age in Samoa also became a best-seller. Mead's groundbreaking book demonstrated that culture exerts a strong influence on psychological, social, and sexual development. The book revealed to an astonished public that different cultures with different values also produce healthy children and adults -- and introduced the idea that many issues prevalent in American society were neither genetic nor inevitable, but instead were products of culture. Although Coming of Age, first published in 1928, is now outdated and reflects many of the failings of its time, it is still considered a landmark work of social science.

As famous as Mead's book is, its influence was eclipsed by that of Patterns of Culture, published by anthropologist Ruth Benedict in 1934. Using her fieldwork studying societies in the South Pacific, southwest United States, and the west coast of Canada, Benedict illustrated how any culture represents just a small sample of the vast spectrum of human behaviour. Patterns of Culture is a foundational text for the very concept of diversity.

So here's where the worlds collide.

In 1943, Benedict and her colleague Gene Weltfish published a pamphlet that created controversy among bigots and made the case for a shared humanity: The Races of Mankind.

The pocket-sized publication was a full-on attack on common misconceptions. "Some people have shouted that if we got into our veins the blood of someone with a different head shape, eye color, hair texture, or skin color, we should get some of that person's physical and mental characteristics. . . . Modern science has revealed this to be pure superstition."

The response was massive and unexpected. Hate mail oozed into her departmental postbox. . . . The FBI dispatched interviewers to check up on the Columbia [University] department. . . The public controversy spurred sales. Churches and civic groups would eventually place orders for as many as three-quarters of a million copies of The Races of Mankind, which became one of the most widely distributed texts on the subject of its time.

I read that last bit -- "churches and civic groups would eventually place orders" -- and a little bell dinged in my mind. Hang on... That sounds familiar. Was that...??

Yes, it was! In the summer of 2021, during a family reunion, I wrote about a book that my siblings and I remember from our childhood, called In Henry's Backyard. I saw a copy of this ancient text at my brother and sister-in-law's house, and learned that the United Autoworkers -- the most progressive union of its time -- was involved in adapting the book into a movie. And both book and movie were based on Benedict's pamphlet!

The post is here: a childhood book and a dream for humanity. 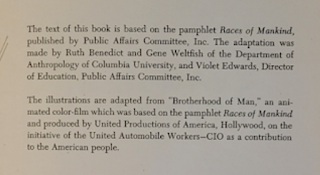 An amazing coincidence. Plus some evidence that my memory occasionally still functions.

One day I will write about parts of my worlds that are always colliding. It's called All Roads Lead to Allen Ginsberg.