a childhood book and a dream for humanity: in henry's backyard (1948) 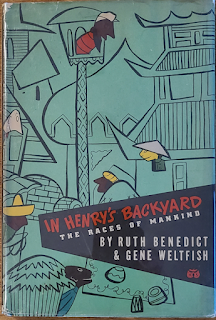 When I was a child, my family had a book called In Henry's Backyard. My siblings and I read it repeatedly. The book tells the story of a man who learns that all the "races of man" are equal.

Over many years and decades, my brother has mentioned this book, an artifact from our youth. With the advent of the internet, I was able to suggest a few sites where he might be able to find a copy of In Henry's Backyard. And he did.

During our recent vacation, hanging out on the deck of my brother and sister-in-law's home, my brother mentioned the book, and I was excited to hold it in my hands, a piece of my personal history.

Seeing the cover was transporting! By today's standards, the illustrations are racist caricatures, and the concepts are all drawn from stereotypes. But in the context of its time, this book was decidedly anti-racist.

Here's the inside blurb of In Henry's Backyard. 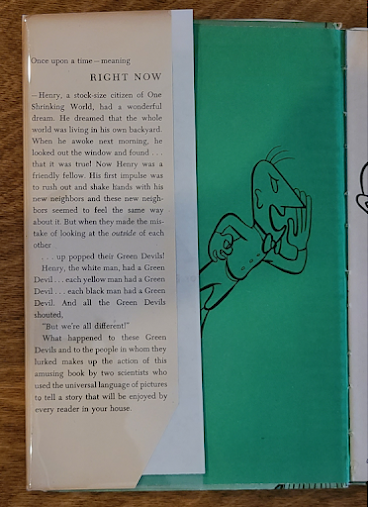 As my brother read a random page aloud, I suddenly remembered a line from the book. One portion refutes the idea that brain size is somehow linked to intelligence, a concept that was in vogue at the time. I called out, Wait wait wait . . . and the biggest brain belonged to an imbecile! Long-term memory, eh? 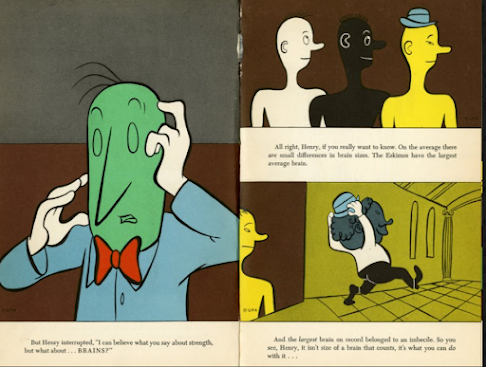 As I paged through the front matter, I was even more amazed to see this. 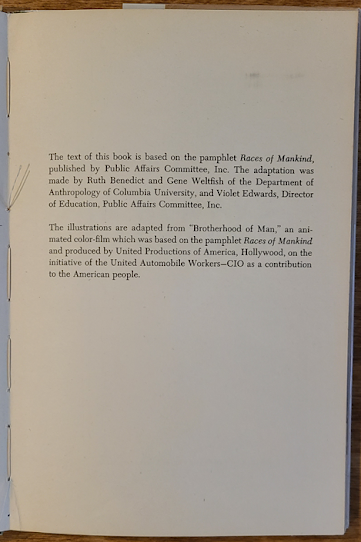 Imagine my surprise -- and my pride -- at discovering that In Henry's Backyard this book was born of the labour movement! The UAW! Walter Reuther! My heart swells thinking of it.

A colleague suggested this book doesn't belong on our shelves. And they were right. Children don't need to read Julie of the Wolves; there are far more modern and relevant books that cover the same ground.

But I felt the need to put Julie in context. The intent of the book was not racist. George was using the terminology of the time. We might also point out that George was white, and was telling an Inuit story. It would be better for Inuk to tell their own stories. True enough. But in 1972, telling a positive story about an Inuit person and about wolves was itself progressive.

Similarly, I would never suggest that In Henry's Backyard should be reprinted, and it certainly doesn't belong on library shelves today. But it shouldn't be dismissed as offensive or hidden as an embarrassment. In the context of its time, it was light-years ahead. As my brother said, "It makes a point that is yet to be embraced."