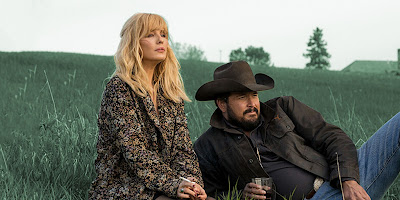 Season 5 of "Yellowstone" is streaming now. I love this show, and I'm waiting for the full season to post on Prime before I bingeing this latest installment.

I was surprised to learn that the current take on Yellowstone describes it as right-wing -- that people claim the show espouses right-wing beliefs and values.

Taylor Sheridan, the show's creator, disagrees. So do I.

And I wrote this, below, before I read Sheridan's response.

I frankly don't understand how this show can be seen as representing so-called red-state values. It makes me wonder if the folks writing these pieces have actually seen the show. Could it be they've seen the cast and the setting, and read a few bullet points, and assumed they know the show? It wouldn't be the first time that cultural critics have made that mistake, and unfortunately right-wingers aren't the only ones guilty of it.

Yellowstone, at bottom, is about land. Who owns the land, how did they come to own it? Is their claim to the land legitimate -- is it based on economic right, or settler's laws, or stewardship? How will the land be used -- for profit, for preservation, for community?

Indigenous issues are front and centre, and the portrayal of Native issues is not only sympathetic, but nuanced, complex, and seemingly authentic. How can a show that highlights and sympathizes with Native American issues be said to be (politically) conservative?

Women's perspectives are always present in Yellowstone, including those of Native women. The women of Yellowstone are fully realized people. They're not: window-dressing, or only reacting to men, or stereotyped, or stock characters.

Yellowstone is also about trauma, and how trauma plays out in the lives of individuals, families, and entire communities. This is also a progressive take on the human condition.

And most importantly, Yellowstone is anti-capitalist. The root cause of every trauma is profit. The bad guys are the ones who care only about the bottom line, stock dividends, wringing profit out of every acre. Cowboys and ranchers have conflict with the Rez and with the tribal police, but (in this show) they are both coming from a place of honesty and love. The developers are coming from Wall Street.

Like all quality series, Yellowstone is complex and multi-layered: family saga, romances, coming-of-age, culture clashes, history, and politics are all rolled together. Every hero is also an anti-hero; no one (except perhaps the land developers) is purely good or evil. All these parts play out against a backdrop of gorgeous scenery, with the pace and violence of an action-adventure movie. Yellowstone is very violent, sometimes a little over-the-top, so if that's not your thing, don't even try it.

I wrote this post before reading this interview with Taylor Sheridan in The Atlantic, so I'm pleased to see the show's creator confirm my point of view. I'm also a big fan of the modern western genre, so it was great to read Sheridan credit The Unforgiven, the movie that began the new, progressive re-imagining of the western.

Sheridan insists that Yellowstone is not a “red-state show.” “They refer to it as ‘the conservative show’ or ‘the Republican show’ or ‘the red-state Game of Thrones,’ ” he told me. “And I just sit back laughing. I’m like, ‘Really?’ The show’s talking about the displacement of Native Americans and the way Native American women were treated and about corporate greed and the gentrification of the West, and land-grabbing. That’s a red-state show?”

Sheridan is right that the show’s politics are not easy to pin down. Yes, its red-state milieu—all those guns and horses and big, open vistas—along with its veneration of honest toil, cowboy masculinity, violence, and characters who have a general resistance to change may have drawn rural dads who fear, like John Dutton, the end of their own ways of life in a changing America.

But Yellowstone doesn’t have an explicit ideology that maps onto a traditional red–blue spectrum. It’s a mishmash of generally anti-capitalist, anti-modernist populism; pro-rancher libertarianism; conservative environmentalism (I know, today that sounds like an oxymoron, but it has sturdy Teddy Rooseveltian roots); and a sympathetic, pro–Native American revolt of the oppressed. The series isn’t a sop to conservative values, or at least it’s not only that. What Sheridan is up to is slyer, or maybe just more muddled.

Sheridan told me he aims to do “responsible storytelling,” to depict the moral consequences of certain behaviors and decisions. He says he was strongly influenced by Clint Eastwood’s 1992 film, Unforgiven, which “upended” the black-hat/white-hat conventions of the traditional Western. Eastwood “let the sheriff be a bully and the hero be this drunken, vicious killer.” He “shattered the myth of the American Western,” Sheridan said. “So when I stepped into that world, I wanted there to be real consequences. I wanted to never, ever shy away from, This was the price.”

The biggest price—and this theme runs through much of Sheridan’s work—is the one exacted by capitalism and the gentrifiers and financiers who snooker the good people who still work with their hands. Despite his professed admiration for Eastwood’s revisionist Western, Sheridan subscribes artistically to something that looks like the old cowboy way. If his work has a higher moral plane, it’s one governed by cowboy virtues: honor, bravery, physical labor, respect for tradition, and a willingness to die—and kill—in defense of your family and your land.

Noel Murray, writer of this Atlantic piece, seems to be setting up a dichotomy that doesn't exist. Sheridan's admiration for The Unforgiven is not in opposition to Yellowstone's values. The modern western is simply a more honest telling. It brings to the foreground stories that were entirely absent from Hollywood-style mythmaking of the Old West. Stories of women, enslaved people, immigrants. Stories told through a working-class and often anti-capitalist lens. And an often heartbreaking honesty about the systematic destruction of Indigenous land and culture. What Murray calls "cowboy virtues" are the same values and virtues found on the Rez -- setting up often unresolvable conflicts.

So excited to watch Season 5!