the end of roe and how we got here

With the unprecedented leak of the SCOTUS draft brief, and official confirmation of the politicization of the Court, we see the final nails pounded in the coffin of Roe v. Wade -- a turning point which somehow still shocks many people, despite the exceedingly clear regression to this point over the past 40 years.
Given this, it seems strange to me that I haven't blogged about abortion rights in more than two years.
Strange, because this is the issue I care most about, above all else.
Strange, because I've spent a good portion of my life thinking, writing, organizing, and supporting abortion rights and abortion access.
Strange, because I am angry and hurting about this. But I suspect I am angry at different people than many readers may be.
Partly I stopped writing about Roe and US abortion rights because I feel I have nothing left to add to the discourse -- nothing to write that I haven't written again and again. Here in 2018, I re-ran my essay from 2005. No matter how many ways I find to say it, it comes down to two points.
One. Abortion rights are essential to human rights, to justice, and to basic equality for all people. Abortion rights are the sine qua non of women's freedom, and the bottom line of equality for any person who can become pregnant.
Two. Roe v Wade is meaningless for millions of American women, and has been for decades. Abortion rights have been steadily impeded, eroded, and erased for more than 40 years, a process that began with the passage of the Hyde Amendment in 1976, gathered momentum when Ronald Reagan became president in 1980, and has barrelling downhill ever since. This includes the 16 years of Democrat presidencies.
And partly I stopped writing about Roe and US abortion rights because I have been so angry and frustrated that people were -- with extreme laws passed in Mississippi and Texas --  now finally paying attention. That sounds counter-intuitive and is not a good way to approach activism! But I just could. not. stand it.
1976 Hyde Amendment (only affects poor people, so who cares)
1984 Global Gag Rule (only affects poor people in other countries, so who cares)
1989 Webster; 1992 Casey -- both losses for reproductive freedom, but left Roe intact, so who cares
And on and on. (Start your timeline here, then here.) As long as Roe had not been overturned, most liberals and Democrats were willing to look away. 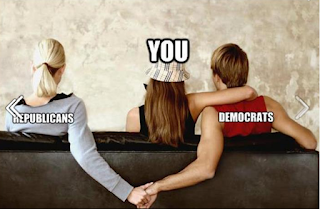 For a majority of Democrat voters, the most important thing to know about abortion rights were: vote Democrat because of the Supreme Court, because we can't let them overturn Roe v Wade.
And while the majority obsessed over Roe, Roe became increasingly irrelevant.
I'm not suggesting Roe actually is irrelevant.  But it's been hollowed out. It's a shadow. A shell.
The anti-abortion-rights movement had everything it needed to succeed.
They were extremely organized, extremely well-funded, and very strategic. They got their people elected to state legislatures and began to work the system, passing every type of abortion-rights restrictions anyone could dream up, taunting the court challenges, knowing that eventually, with enough states becoming hostile to abortion, they would accomplish their only objectives: increasing numbers of low-income women and pregnant people would lose control of their reproduction, and the country would move one step closer to overturning Roe v Wade.
The anti movement has had other factors in its favour. In addition to money, organization, and strategy, they had the Democrats. Abortion became a dirty word, replaced by the euphemism "a woman's right to choose". Bill Clinton said let's make abortion "safe, legal, and rare" -- with little or no attention paid to the myriad laws, supports, and resources it would take to make such a thing possible.
They had the "muddled middle" -- to use Katha Pollitt's excellent expression -- whose discomfort with the idea and reality of abortion made it easy to look away. Shamed by stigma created by anti-abortion-rights zealots and the media who support them, most were happy to look away.
There are other reasons, too.
Roe v. Wade was never a strong ruling; it was always vulnerable to attack. The right to abortion is more secure in Canada -- although it is often under threat and must always be protected and defended! -- because the 1988 ruling in R v Morgentaler is a much broader decision.
The US's obsession with states' rights, and the right wing's expert exploitation of it, have left millions vulnerable, not only on reproductive justice, but on so many fronts.
The US's lack of an organized healthcare system leaves millions vulnerable to assaults on reproductive freedom. If you lack basic healthcare, that's going to include a lack of access to reproductive needs.
The mainstream media's adoption of the disgusting lie "pro-life" -- the greatest PR coup of the modern world -- did untold damage.
But be assured of one thing. Our side has been planning for this for decades, too, with abortion funds, underground networks, and direct action. It's a much more successful strategy than voting Democrat.
As always, the Guttmacher Institute is your best source for data on all aspects of reproductive justice.
If you want to help, donate to abortion funds: National Abortion Federation, National Network of Abortion Funds. Canada has one, too.
If you live in a free state and have the resources, you can host a person traveling for abortion from a slave state. It's incredibly important and deeply gratifying work. NNAF can help you find a network.
Posted by laura k at 5/06/2022 08:18:00 AM

Hi, Laura. The corruption of the USSC was manifest when it delivered its decision in Citizens United. That raised a bit of a stink but only for a while. Emboldened, the court went on to start dismantling voting rights and affirmative action, bit by bit. No one stormed the Bastille then either.

Trump and the gerrymandered Senate moved quickly to stack the court, turning it into another Republican vassal.

Short of repealing the 13th and 14th Amendments it's been a radical rightwing field day. Even Roberts has said he fears "his" court's legacy may be its blatant partisanship, just another political agency.

It is sad to watch the demise of American democracy, albeit from the sidelines. Lincoln, quoting scripture, said "a house divided against itself cannot stand." Shortly after that came the Civil War.

Unless and until liberal democracy is restored the country will descend into tribalism and oligarchy. It's also happening here. Democracy is on the wane, authoritarianism is spreading and not just in countries such as Hungary or Brazil.

Apathy or lack of action is not the problem.

No matter how much stink people raise, if their representatives won't listen, it won't help. Stinks are raised. Constantly. Democrats do what Democrats do.

What has emboldened the radical right is the total lack of opposition.