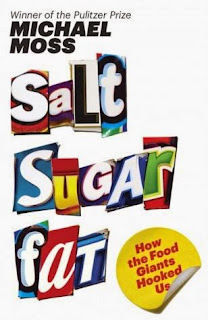 Salt Sugar Fat: How the Food Giants Hooked Us by Michael Moss is an excellent addition to a bookshelf that includes works by Michael Pollan, Eric Schlosser, Marian Nestle and others who write about the health of our food and the un-health of the industrial food system. Moss lifts the curtain on the giant corporations that engineer and market convenience foods and processed foods. What he reveals is largely invisible to us on a daily basis, yet affects our society significantly - and catastrophically.

Moss is a seasoned investigative reporter - he was the first to expose trans fats, and more recently "pink slime" - and this book is a tour de force of research. Moss takes you to the laboratory and the board room, where chemical engineers and marketing executives contrive to get North Americans eating more and more of everything unhealthy. (The book is written in a US context, but it is equally relevant to Canada.)

Salt Sugar Fat is full of wonderful mini-histories of corporations like Kellogg's and Kraft, and eye-popping demographic data about what North Americans eat. You'll learn how our food has become increasingly sweeter, increasing both our tolerance and desire for ever-sweeter food. How we eat three times as much cheese as we did 40 years ago, now that cheese - or more accurately, a processed substance distantly related to real cheese - is used as an additive in countless foods. And especially, the myriad ways that the holy trinity of salt-sugar-fat is used by food engineers to encourage overconsumption.

Here's an example of a little gem I gleaned from this book. I've always scoffed at fruit drinks that are cynically marketed as containing "10% real juice," meaning, of course, that they are 90% water and sugar. For people accustomed to drinking soda (pop), 10% real juice may seem like a healthy improvement. But Moss describes the how the "juice" in those drinks is created.

At is extreme, the process results in what is known within the industry as "stripped juice," which is basically pure sugar, almost entirely devoid of the fiber, flavors, aromas, and any of the other attributes we associate with real fruit. In other words, the concentrate is reduced to just another form of sugar, with no nutritional benefit over table sugar or high-fructose corn syrup. Rather, its value lies in the healthy image of the fruit that it retains. ... A company like General Foods can use this stuff and still put the comforting words contains real fruit on the box.

Much of Salt Sugar Fat is about economics. Moss quotes a parade of food executives - whistleblowers and industry faithfuls alike - who are all caught in the same trap: reduce the amount of salt, sugar, or fat, and the product's taste will suffer drastically. Therefore consumers will buy less. Therefore consumers will buy the competitor product without the reduced additives. And therefore the company cannot reduce the additives.

When reductions are possible, they are immediately offset. It is a principle of the processed food industry - the first commandment, the sacrosanct law - that a reduction in one of the trinity must be countered with an increase in another. Is the product lower fat? Then it is higher in salt. Is it slightly lower in salt? Then it is higher in sugar. Without copious amounts of these three ingredients in various engineered forms, processed food would be completely inedible.

One such tale from within Kraft Foods said it all. A group of high-level insiders was very concerned about the health implications of the company's products. There was no getting around it anymore: these processed foods are contributing to skyrocketing rates of hypertension, heart disease, and diabetes. (Moss refers to this as "the obesity epidemic," but it is actually about health, not weight.) These Kraft insiders fought against a deeply entrenched corporate culture, risking their livelihoods, to force their colleagues to face these facts. They worked very hard, and succeeded in reducing some of the salt-sugar-fat in the company's products by a tiny bit. Only a tiny bit, one might say, but a start.

Then the sales figures came in. These concerned insiders were immediately slapped down by the board of directors, speaking for the shareholders. Wall Street reminded the company that they are not in the business of caring about what consumers eat. They are in the business of making money. The executive behind the internal movement was demoted, her career significantly curtailed.

Are companies trying to do better? Moss crunches the numbers.

"In Capri Sun alone we took out 120 billion calories," [Kraft executive] Firestone said. ... "We've looked at the amount of sodium we've taken out. Last year was six million pounds, and we're going to add nine billion servings of whole grain between now and 2013..."

If those numbers sound impressive consider what Michelle Obama manged to wrestle out of the entire processed food industry in 2010, after asking for their help in fighting obesity. "I am thrilled to say that they have pledged to cut a total of one trillion calories from the food they sell annually by the year year 2012, and 1.5 trillion calories by 2015," she announced. ...

The math on all this, however, is less compelling. If everyone in America consumed the standard 2,000 calories a day, or 730,000 a year, the 1.5 trillion in saved calories would reduce our collective eating by not quite 1 percent. It's actually bleaker than that, according to some health policy experts. In reality, many of us consume far more than 2,000 calories, and processed foods make up a large part, but not all, or our diets. So the real drop in consumption from those 1.5 trillion calories is likely much less than that 1 percent. Still, it's a start.

Is it? Salt Sugar Fat leads one to question a system that would rely on these industries to safeguard consumer health. And what about the government agencies tasked with keeping the industries in check? They are a significant part of the problem.

With the American people facing an epidemic of obesity and hardened arteries, the "People's Department" doesn't regulate fat as much as it grants the industry's every wish. Indeed, when it comes to the greatest sources of fat - meat and cheese - the Department of Agriculture has joined industry as a full partner in the most urgent mission of all: cajoling the people to eat more.

Moss frequently notes the connections between the processed food industry and the tobacco industry. Kraft and General Foods - the two mega-giants of processed food - were for a long time owned by the Philip Morris corporation. Kraft and General Foods, now one company, are no longer owned by Big Tobacco, but the marketing and engineering principles of that industry informed the companies' cultures and decision-making. The language of addiction and the view of salt-sugar-fat as narcotics run through this book.

When reading Salt Sugar Fat, it's difficult to avoid the conclusion that this is, at bottom, an economic problem. Moss touches on these issues; for example, he mentions more than once the class divide between the food industry executives, who never eat their own products, and their customers. But I wish he went further. For example, Moss writes about the convenience stores overloaded with processed foods, selling no fresh foods at all, and the insidious (and invisible) industry practices that cause this. But he mentions only once, in passing, that these same neighbourhoods are usually food deserts, making processed food laden with salt-sugar-fat the only option for many low-income families.

Another economic factor Moss alludes to, but doesn't examine, is something we hear about all the time in a non-economic context: families are so busy now, both parents work (usually portrayed as "more women are in the workforce"), families don't have time to cook proper meals. That's worth examining, too. Why are families so much busier now, why do both parents work? One principal reason: for most people, it's impossible to raise a family on one income, because the cost of living, especially housing costs, has far outstripped wages.

For anyone writing about the food industry and overconsumption, economic factors are an intrinsic part of the picture. Moss understands that. I just wish he went further.

It's not only an economic issue, of course. It's also an education issue. In my workplace yesterday, a colleague left some "healthy" cereal out to share. Its packaging was full of claims like "no preservatives" and "all natural". Everything about it, down to the colours and fonts used on the packaging said "healthy" and "alternative". The first four ingredients, in order, were: sugar, wheat, corn syrup, and honey. That is, three of the four top ingredients are sugar. And the wheat is not even whole grain, so the human body processes it largely as sugar.

That is technically true. But it is also incomplete, reductionist, and disingenuous, as Moss himself has shown in more than 400 pages of excellent writing and impeccable research. The individual consumer must be extremely motivated, and blessed with a mighty will, to withstand the economic, social, cultural, and biological forces stacked up against her. The stuff is engineered to make us over-consume, our bodies are biologically programmed to like the stuff and want more of it, and many of us cannot afford to do otherwise.

Despite these critiques, Salt Sugar Fat: How the Food Giants Hooked Us is page-turning, eye-opening, thought-provoking book that I highly recommend.
Posted by laura k at 5/03/2015 07:00:00 AM