what i'm reading: the turning point: 1851: a year that changed charles dickens and the world 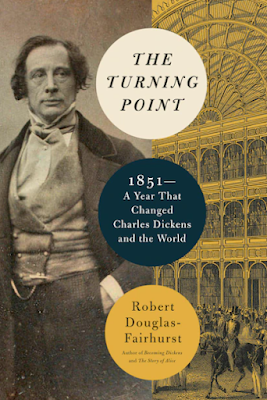 The Turning Point: 1851 -- A Year That Changed Charles Dickens and the World was written for me.

I love Dickens. He's among the core writers whose work mean the most to me (along with Orwell and Steinbeck).

Bleak House is my favourite of all Dickens. I wrote a mini-thesis on it in university.

1851 is "my year". This is the period and the year that I've read and watched the most about, and been most fascinated by.

I'm a close reader. When I studied literature in university, my thing was the close read -- noticing and analyzing the smallest details -- and I've been that kind of reader ever since. For me the details reveal the deeper meanings, the beauty and wonder of great writing. In The Turning Point, Robert Douglas-Fairhurst gives one year in the life of Charles Dickens the close read.

Given all that, I was primed to read and enjoy this book! And I did enjoy it, very much.

A close read of Dickens in 1851 brings in so many elements. There is the Great Exhibition ("Crystal Palace"), the steel-and-glass building that gives the exhibition its name, and reaction to it; the industrial revolution, and the treatment of workers and the poor. Dickens' relationships with his wife, family, friends; his editing and publishing work; his charity and reform work; his theatre pursuits; his politics. Out in the larger world, there is the American abolition movement. Frederick Douglass makes an appearance -- yet more interest for me.

...from April 1852 to December 1853, Bleak House was reprinted in its entirety by Frederick Douglass's Paper in Rochester, New York -- a decision based on the fact that Dickens's novel, despite the clear British focus of its plot, had a broader social mission that was no respecter of national boundaries. Even the scene in which we are told that children like Jo are "dying thus around us every day" was enlisted in the "Literary Notices" section of the paper to remind Douglass's readers that "us" included them.

There is the women's movement and clothing reformers; the aftermath of the revolutions that swept Europe a few years earlier; and of course, colonialism and imperialism. This is Victorian England, after all.

Although the book is rich in detail, as a close read must be, it never gets bogged down or tedious. The writing is very accessible and lively; it moves right along, returning to the main themes without belabouring them.

As much as I enjoyed this book, I don't think The Turning Point would be particularly interesting, or even make much sense, unless the reader knows Bleak House fairly well. Douglas-Fairhurst alludes, without explanation, to many elements from Dickens' life that appear in BH. For example, it is mentioned in passing that Dickens carried a huge key ring that held a giant jumble of keys. In BH, Esther carries such a key ring. Knowing that Esther was partly a stand-in for Dickens -- especially given that Dickens is often criticized for his portrayal of women -- is very interesting, if you love Dickens and BH. But if you don't, would you care? Indeed, you might wonder why the author thought you should care about Dickens' keys.

There is also a honking huge spoiler that reveals the answer to one of the mysteries central to the plot of BH (which of course I will not repeat here).

Bucket's emergence as a central figure has led to Bleak House being viewed as one of the earliest detective novels: a whodunnit that includes a murder mystery and ends with the revelation that almost every character is part of tangled web of secrets and lies.

I wouldn't want to read BH for the first time knowing the answer to a central question.

The Turning Point is a lovely book -- if it's a book for you.

I guess I should read Bleak House! I somehow never did despite loving the other Dickens books I did read. David Copperfield was my favorite, but even that I read when I was too young to appreciate all the social criticism going on between and not even between the lines. So many books to read and to re-read.

If you love Dickens, it's an amazing book. To anyone who dislikes Dickens, it would be torture -- it's the most Dickens-esque of all his works. The author of The Turning Point calls BH Dickens's best work, which made me happy. :)

I find when I read something from the 19th Century, it takes time to re-adjust to the rhythm and density of the language. It's SO different.

This reminds me that I might re-read City on Fire, the Dickens-esque 21st Century novel that I loved so much.

I used to love 19th English century literature---Austen, Bronte, Dickens, etc.---as well as 19th century American lit (Twain, Melville, Hawthorne, etc.) But it has been a while---I wonder how I would feel about it now. I did re-read some Jane Austen books a number of years back and still enjoyed them.

Wuthering Heights is among my favourite novels of all time, and I love most 19th Century British authors -- except Jane Austen. Which puts me at odds with almost every librarian I know, and most readers these days. I can appreciate that she was very good at what she did, but I find her work so boring. Her continued popularity is a mystery to me.

Yes to Twain and Edith Wharton, and obviously Melville is hugely important, but I really only become interested in American writing in the 20th Century.

I'm hiding behind the sofa as I type this ( in case you throw something at me ) , but I've not read any Dickens.
Firstly anything 19th Century the language is different , secondly it's a bit dour.
It's on my list to get round to one day but not sure where to start.
Mark Twain is another one.

Ha! I'm not that kind of reader, or that kind of librarian. Dickens is a great writer, and he was hugely popular in his day, but in the 21st Century, he's not for everyone!

You can live your whole life and read many wonderful things without reading either Dickens or Twain.

Plus I can't hit a barn door with anything I throw. :)

You can probably pitch better than the Red Sox bullpen , I bet. ;)

THAT is very sad!