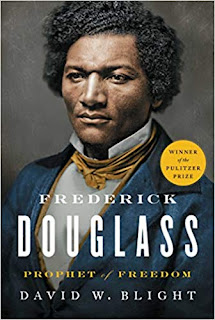 My biography reading continues: I finally finished Frederick Douglass: Prophet of Freedom by the historian and Douglass scholar David Blight. It is a monumental work, not an easy read, but extremely enlightening and very satisfying.

The book is notable for Blight's refusal to ignore or sugar-coat Douglass' flaws. Douglass was a genius, and a hero -- my vote for Greatest American -- but he was a human, and therefore imperfect. Blight's willingness to show us the whole man, including flaws and foibles, gives his work extra credibility.

The Douglass of Prophet of Freedom is not a myth. Although his words and his work reached mythical proportions, the Douglass of this book is a man. Blight brings us the full man, not just the parts we admire. In our present culture that rejects anything but the illusion of moral purity, where heroes and world-class talents are discarded because of their failure to measure up to idealized standards, this is a bold choice.

In addition, Blight also tries to make visible someone who has been invisible in Douglass' story -- Anna, Douglass' first wife. Douglass spent his entire life crafting autobiographies and memoirs, yet the mother of his many children -- who held the home together while her husband traveled the world, and who endured her husband's intimate friendships with several other (white) women, one of whom lived in their family home -- is barely mentioned. Blight uncovers whatever information is available about Anna, and invites us to imagine how she may have felt and what she may have done at various times in the history.

Douglass' story is more improbable, and more complex, than any fiction. He was born a slave, survived slavery in varying degrees of horror, and while still enslaved, began a journey of self-education and discovered his unquenchable thirst for knowledge. He escaped, and helped others do the same, then fashioned a life dedicated to the cause, first of abolition, then of full equality.

Really, the phrase "a life dedicated" is inadequate. Douglass' life was his work, and his work was his life. The extent of his writing, speaking, publishing, sponsoring, enduring grueling travel with punishing schedules, and public notoriety that put his life in danger on a daily basis, seems superhuman, impossible to be the work of only one man. He was an international celebrity, drawing crowds of thousands in several countries, the most photographed man of his era, and although he enjoyed fame, it was dangerous (it's miraculous that he was not assassinated), and his fame existed for only one purpose: to further the cause.

Prophet of Freedom sees many other historical figures crossing paths with Douglass, from the obvious ones, such as Susan B. Anthony and Lincoln himself, to the radical abolitionists John Brown and the legendary Harriet Tubman, and later, the anti-lynching activist Ida B. Wells.

Douglass was a radical through and through. He knew slavery would never end without bloodshed, and he knew that no compromise was possible. He categorically rejected any attempts to relocate African Americans to a different country (this idea was huge and omnipresent), and did the same for any attempts to define Black Americans as second-class or other in any way. He insisted on abolition and full citizenship.

He lived to see his dream realized, but also to see its unraveling, as post-war Reconstruction was hijacked by former Confederates, and the era of lynching and Jim Crow began. Reading about these years is heartbreaking beyond measure, and the grief almost breaks Douglass. But "The Lion" regroups and keeps fighting.

In his older age, Douglass joined "the system," and was employed by the US government in Haiti and Santo Domingo (now the Dominican Republic). This gave the aging Douglass a more feasible way to support himself and the ever-increasing numbers of people who were financially dependent on him. His radical ideas never faltered; he truly believed he could advance the greater good working from within. (Spoiler alert: he couldn't.)

Douglass was a radical in his personal life, too. He maintained close and devoted friendships with various female abolitionists, and insisted on their right to be seen in public together. After his beloved, neglected wife Anna died, Douglass married Helen Pitts, a brilliant, dedicated activist, who was white. This was scandalous on both sides of the colour divide in a way we can scarcely appreciate today.

Blight isn't looking to overturn our understanding of Douglass, whose courage and achievements were unequivocal, but to complicate it — a measure by which this ambitious and empathetic biography resoundingly succeeds.

Those two words best describe Prophet of Freedom: ambitious and empathetic. In the acknowledgements, Blight tells us that he researched this book for 10 years, but since his first published book was about Douglass, in a sense the book represents his entire scholarship. Blight is the director of the Gilder Lehrman Center for the Study of Slavery, Resistance, and Abolition at Yale University, as well as a professor of history and African American studies.

If Frederick Douglass had been born white in 19th-century America, he would be remembered as a self-made man in the style of Thomas Edison. In 20th-century America, postwar, he could have been a counselor to presidents, like James A Baker, or perhaps a media personality, even Walter Cronkite.

But he was born a slave, in Maryland in 1818, and he escaped to freedom and a life of voice and pen, thundering against slavery and for justice and the rights of African Americans and women – while becoming all those other things as well.

This is an interesting idea -- but it's wrong. Douglass would never have been tame enough, or diplomatic enough, or palatable enough, for either the modern White House or for network television. His ideas were radical, far-reaching, and uncompromising, and we should continue to study them, now and always.

I feel I should end this with Douglass' own words, which are found several times in this blog.

Let me give you a word of the philosophy of reform. The whole history of the progress of human liberty shows that all concessions yet made to her august claims, have been born of earnest struggle. The conflict has been exciting, agitating, all-absorbing, and for the time being, putting all other tumults to silence. It must do this or it does nothing. If there is no struggle there is no progress. Those who profess to favor freedom and yet depreciate agitation, are men who want crops without plowing up the ground, they want rain without thunder and lightening. They want the ocean without the awful roar of its many waters.

This struggle may be a moral one, or it may be a physical one, and it may be both moral and physical, but it must be a struggle. Power concedes nothing without a demand. It never did and it never will. Find out just what any people will quietly submit to and you have found out the exact measure of injustice and wrong which will be imposed upon them, and these will continue till they are resisted with either words or blows, or with both. The limits of tyrants are prescribed by the endurance of those whom they oppress. In the light of these ideas, Negroes will be hunted at the North, and held and flogged at the South so long as they submit to those devilish outrages, and make no resistance, either moral or physical. Men may not get all they pay for in this world; but they must certainly pay for all they get. If we ever get free from the oppressions and wrongs heaped upon us, we must pay for their removal. We must do this by labor, by suffering, by sacrifice, and if needs be, by our lives and the lives of others.