we can stand with ukraine but i cannot stand the hypocrisy 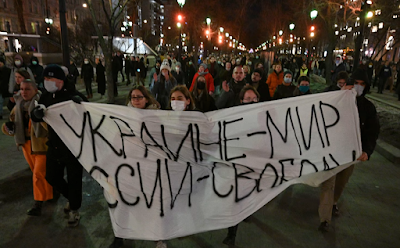 Every day brings new images of war crimes and atrocities, destruction and suffering in Ukraine.

Every day brings new declarations of love and solidarity for the Ukrainian people.

And every day I shake my head and seethe over the hypocrisy of the US, US media, and of many Americans, wondering: Does any of this look familiar to you?

What is currently happening in Ukraine has happened in every single US-led invasion and occupation. Mass graves. Torture. Rape. Hospitals destroyed. Apartment buildings, schools and houses of worship bombed. The wholesale slaughter of civilians (sometimes referred to as "insurgents"). The US has done it all -- and not in the distant past. The US has spent the last two decades committing war crimes in Iraq and Afghanistan. The list of US invasions is very long, especially if you count the ones that supposedly didn't happen.

I am not suggesting that Ukrainians are not suffering. Nor am I rationalizing or excusing Putin's actions. That should be clear. These are war crimes -- horrific, heinous, unforgiveable.

And so it was when the perpetrator was the US.

If you stand with Ukraine, you should have stood with Iraq.

If you condemn Putin, you should have condemned Bush, Cheney, and Blair. After winning the Nobel Peace Prize, Obama bombed seven countries. Biden continues the tradition, condemning Putin while dropping bombs on Syria.

Americans were given rationalizations. First Iraq invaded Kuwait. Like Americans cared about Kuwait, or knew it existed?

These excuses have a long, long history. Gulf of Tonkin. Remember the Maine. Get them over there before they get us over here. And don't forget good old humanitarian reasons. Hundreds of millions around the globe have been killed, maimed, displaced, and traumatized in the name of US's humanitarianism.

US media -- much of it owned by the corporations that benefit from endless war -- performed its usual sleight-of-hand, branding any dissent as unpatriotic, mindlessly parroting "support the troops", inviting former US military commanders to offer "analysis" while providing no serious discussion of alternatives, and ignoring the very existence of the peace movement.

And now, irony of ironies, the US media mocks how Russians are seeing the war portrayed in their state-run media. Here's a headline for you: U.S. says Russia trying to create pretext for imminent invasion. Do tell.

Note: the following was written in late February, shortly after news broke about the Russian invasion of Ukraine.

Some Canadians are calling on the government for military intervention in Ukraine. Naturally the spokespeople for Canadian Forces want that. That's their job.

The situation is mind-boggling and horrendous beyond description. Why would we want to add to the killing?

Perhaps it's easier for me to see this clearly, because it is usually my country of origin doing the invading and killing.

My friend WGH asked for some tips about how to talk about this, especially to a young person in their life who is in the military and eager to join the fray. I don't know if I have any sage advice, but here are my thoughts.

First and most importantly: we must question whether other countries getting involved militarily can actually help -- or whether that will only increase the risk of a much more widespread, prolonged, and possibly global war with Russia. In my view, the latter is much more likely.

Canadians like to believe that Canadian soldiers are deployed to protect civilians. In reality, the military is used to advance political agendas. If the war in Ukraine escalates and spreads, it will not be about Ukraine. It will be about global power -- and many, many, many more people will die.

The people who send troops to war are not the people who die in those wars. Our duty is to protect young people and not let them be sacrificed for goals that may not be achievable.

I'm greatly heartened and incredibly impressed by the anti-war protests in Russia. I know exactly how those people feel, watching helplessly as their own country commits war crimes. But Russians protest at much greater risk than I ever did.

This story from Vox outlines a number of ways the US (and, by extension, Canada) could help Ukraine without escalating the war.

Right now it seems the most important things to do are to tell the federal government that we do not want Americans and Canadians to intervene militarily -- but we do want our government to do everything we can to help Ukrainian refugees. And we can help refugees ourselves, by donating, by advocating for them, and by being a welcoming presence in our communities.

Thank you for sharing your thoughts on this.

Thanks for reading. Your comment reminds me to link your name.

I agree entirely. Since we can currently see very clearly in the case of Ukraine how people en masse can be moved to care for others, I keep thinking that the US media should have given the same intensity of coverage to the suffering of Yemenis and Palestinians and Iraqis and Afghans as it is currently impressively giving to certain Ukrainians. It would also have been helpful if the same media had been showing the same concern for suffering Ukrainians back in 2014, when US-backed neo-Nazis began attacking and killing thousands of Ukraine's minorities like their Russian speakers and Roma/gypsies. That would have been nice. Also would have been nice if the US hadn't helped ensure that a far-right, Nazi-affiliated government came to power in Ukraine in 2014.

The Intercept: "The fact that Putin is trying to justify the unjustifiable in Ukraine does not mean we must ignore the U.S. actions that fuel his narrative." link