what i'm reading: you could look it up: the reference shelf from ancient babylon to wikipedia 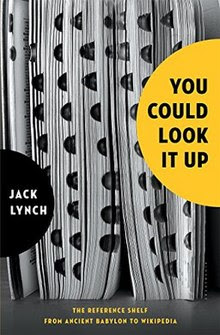 This must be the book-nerd-iest post ever, and unless books are your profession, possibly the biggest book geek-out you'll ever read. And I'm proud to bring it to you.

You Could Look It Up: The Reference Shelf from Ancient Babylon to Wikipedia, by Jack Lynch, is a joy to read, endlessly fascinating, and for aficionados of books or history, extremely entertaining.

YCLIU is organized in short chapters, each highlighting two related, contrasted, works of reference. Between the small chapters are even shorter half-chapters on relevant, often amusing topics.

The organization may seem a bit complicated, but it works wonderfully in the reader's favour. The author, no doubt, knows a lot more about each book he has highlighted, and I imagine could easily overwhelm us with information. Instead, he crafts a concise and lively summary, highlighting whatever is most unusual and interesting about that particular book.

Some of the creators became household names, synonymous with their work: Roget, Webster, Hoyle, Post. Others dominate within professions: Gray's, Black's, Merck. (The card catalogue belongs in this category, and true to librarianship values, it was never branded.) There are collections of medieval medical knowledge, catalogues of sciences of the ancient world, maps of the stars, maps of the world. There are several dictionaries and encyclopedias, which take multiple forms, without even widespread agreement on the differences between the two. From the (marvelous) introduction:

You Could Look It Up does not pretend to be comprehensive, touching on all the world's important reference works -- no book could do that. Instead, it contains accounts of fifty great works I find interesting, maybe because they are the first of their kind, maybe the biggest, or the most learned, or the most controversial, or the most influential, or maybe just the most eccentric or quixotic.  . . .  In my pairings I choose two more or less contemporary works on related subjects and set them in their historical context. . . . Tucked between the chapters are shorter interludes that introduce stories that would otherwise go untold in a strictly linear history. In telling fifty little stories, I hope one big story emerges, as well as histories of some of the major reference genres -- dictionary, encyclopedia, atlas, and so on.

The topical half-chapters are particularly fun. These include information overload (first recorded between 450 and 200 B.C.E.), plagiarism, bookshelf organization, famous errors and omissions, sexism, unfinished or lost projects, a list of some quirky and strange reference books -- and many more. The half-chapters, each only two or three pages, make addictive reading; the breadth of human knowledge represented is astounding.

For a topic that may seem so specific, this book will have great appeal for people who, like me, love to learn bits about everything -- and anyone who loves language. Each short chapter reveals the book itself, and the social context of its creation. Why was this book needed? What problem was the creator trying to resolve, and to what extent did they succeed? How does the work reflect the values of its era? How did it advance progress -- or prevent it? How did the work change lives, and whose lives did it change -- scholars, merchants, professionals, ordinary people?

The creation of each work (they're not all books, strictly speaking) is often the most interesting part of the story. Lynch, an English professor at Rutgers University, has an uncanny ability to highlight details that make what could be a dry synopsis entertaining and often amusing. It's difficult to choose from the dozens of examples that I tagged, but here are a few.

At the end of the eighteenth century, the French engineer Gaspard Clair Francois Marie Riche de Prony oversaw one such workshop. Inspired by Adam Smith's recently published Treatise on the Wealth of Nations (1776), he assembled a team of some sixty unemployed hairdressers to carry out his instructions. (In the wake of the French Revolution there was less call for high-end hairdressers, not least because, thanks to Citizen Joseph-Ignace Guillotin's eponymous invention, fewer aristocratic heads needed dressing.)

To twenty-first-century sensibilities, seventeenth-century pornography does not seem very pornographic. Aristotle's Master-Piece sometimes reads more like a sermon than a sex guide. . . . Once the book gets going, though, there is little doubt that it should be categorized as what Jean-Jacques Rousseau called a "livre à lire d'une seule main," a book to be read with one hand.

From a chapter about two massive dictionaries, the creators of each taking different approaches to their task.

The next editor, though, was a winner: a forty-two-year-old Scot named James Murray. (Later he would pick up a knighthood and a pair of middle initials, becoming Sir James. A. H. Murray, but the initials do not seem to stand for anything.)

In this chapter, Lynch describes two different methods of defining words: splitters and lumpers. He calls Murray of Pompous Initials a "card-carrying splitter".

People who created reference works tend towards the obsessives. In the same chapter as Sir James of the Nonsense Initials, there is the story of William Dodd. Dodd's obsession with compiling quotes from Shakespeare cost him his life.

Dodd hoped his Beauties would not merely entertain his readers but would edify them as well -- from Shakespeare, readers would learn valuable lessons of morality. But he should have paid more attention to a passage he included under "A Father's Advice to his Son, going to travel," in which Polonius advised Laertes against being a borrower or a lender. In 1777, Dodd found himself in debt, and he forged Lord Chesterfield's name on a bond worth £4,200 -- this at a time when a middle-class family could live comfortably on less than £100 a year. When the forgery was discovered, he was sentenced to death by handing. Samuel Johnson pleaded for mercy, and more than twenty thousand people joined in signing a petition begging the crown to commute the sentence. It was in vain. Dodd was hanged at Tyburn in 1777, after prompting one of Johnson's more memorable quotations: "Depend upon it, Sir," he said, "when a man knows he is to be hanged in a fortnight, it concentrates his mind wonderfully."

Lynch demonstrates how reference works reveal cultural attitudes, beliefs, and biases. I was familiar with some examples -- such as the Index, the notorious work of the Catholic Church, and the DSM, which infamously defined much of human sexuality as pathology -- but most were new to me. About Hobson-Jobson, the English-language dictionary of colonial India, Lynch says "the book ends up being a social history despite itself." He attests to the book's racism -- and makes no excuses or justifications for this -- but also reveals how under the often offensive exterior, the book documents a historic cultural shift, evidenced by language.

Lynch makes a very strong case for the reference book as foundational to human progress. At various times, the creation of a new reference work helped form revolutionary thought, created a national identity, enabled science and modern medicine to progress, or enabled ordinary people to educate themselves.

I loved the author's passion for his subject, and his true scholar's openness to learning across all cultures and time periods. Lynch prizes all collectors of knowledge no matter what the source. This quality should be universal, but of course it is not, and it's a pleasure to come across. He also doesn't fear change. He fully embraces the digital era, acknowledging both its wonders and its pitfalls.

Lynch's writing is so lively and animated, that if you have an interest in the books, in language, and in a sweeping world history, you are very likely to enjoy this. The way it's organized makes it an ideal book to read in portions, perhaps between novels -- although I would recommend reading it in the order written.

In short, if you're a book geek, this book is so much fun.

Only now will I share that I didn't like YCLIU when I first picked it up. I thought the organization of the book was too precious, even silly. I read a few pages, and let it go.

But that just seemed ridiculous. I love reference books! And I'm a librarian! Not that most librarians do much reference anymore -- I certainly don't -- but still, knowing where and how to search for information a core part of my profession. How could I not want to read this book??

I gave it another chance, and...  I loved it. What's more, the organization is genius.

I have always loved reference books.

As a child, if I had a school assignment that sent me to an encyclopedia, I would get lost flipping through the book and reading random entries. The same for a dictionary! I'd look up one word, I'd start skimming dozens of definitions. But now, even with a print dictionary and multiple thesauri within reach on my desk, I will quickly google a word to confirm its meaning, thus missing the opportunity to browse. And this from someone who loves print reference. I am rarely nostalgic, but this seems sad.

I can still lose myself in a paper map or atlas, looking at place-names and thinking about their origin. When I was a child, my native New York State always seemed so interesting that way, its place-names revealing layers of history: English, Dutch, and Native American.

My personal reference shelf includes two treasured books that were (two separate) birthday gifts from my mother: a hardcover thesaurus, The New Roget's Thesaurus in Dictionary Form, and Bartlett's Familiar Quotations, 16th Edition. These were incredibly meaningful gifts. We didn't own many books, and even fewer hardcovers. My mother was affirming my writerly self.

Many years later, I was excited to add a copy of the AP Stylebook to my reference shelf; it was a milestone in my writing life.

Through a lengthy email friendship, I ended up with an The Oxford Dictionary of Quotations and a copy of Brewer's Dictionary of Phrase and Fable.

Pre-internet, Allan and I would look things up in Leonard Maltin's Movie Guide and The Rolling Stone Record Guide (neither of which we own anymore).

And of course, there is The Baseball Encyclopedia, foundational in our home.

Here are reference books we own.

These are in my office, in easy reach, although I rarely reach for them anymore. 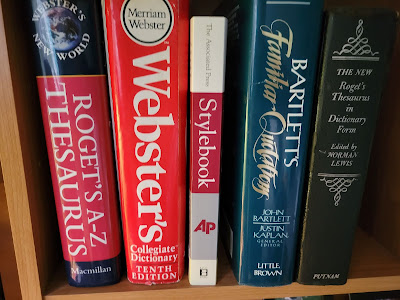 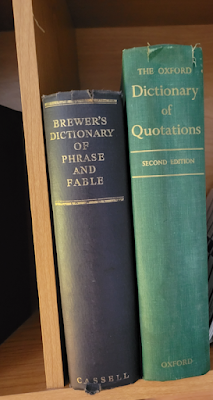 These live on our shared shelves. 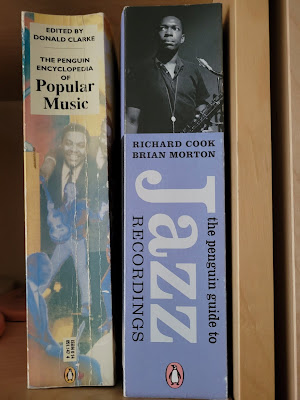 These are a sample of the reference books on Allan's shelves. 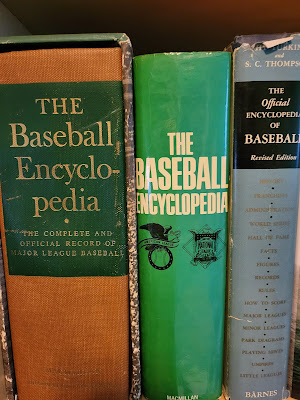 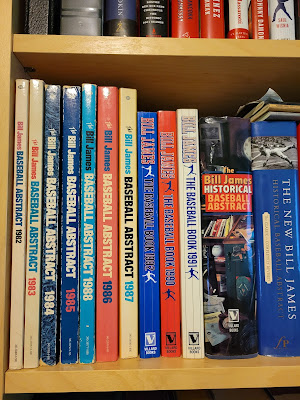 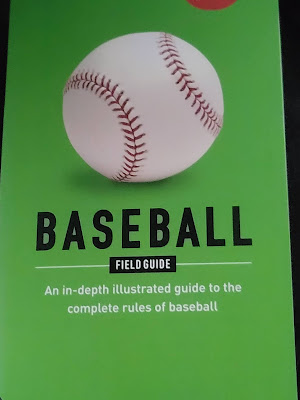 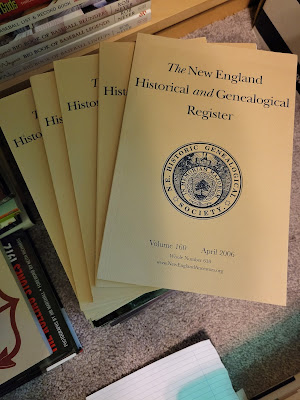 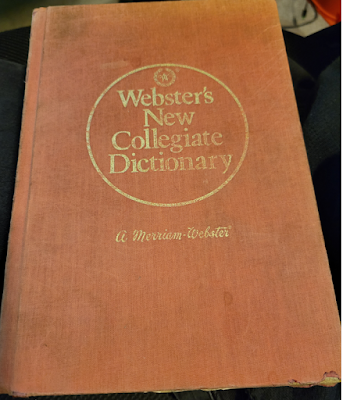 Thanks for sharing, I will look for it. Love all the pics of books from your shelves.