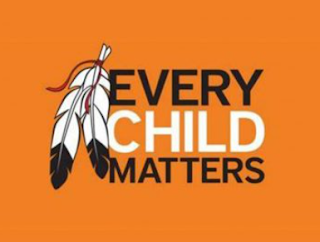 If it wasn't clear why we should not be celebrating Canada Day this year, by now it should be.

Three days after the discovery of 215 skeletons of children were found at the site of a former residential school in Kamloops, the remains of approximately 750 adults and children in unmarked graves have been found near a similar site in Saskatchewan.

A few days later, the remains of 182 people were found at the location of another residential school, in Cranbrook, BC.

There are undoubtedly hundreds more, maybe thousands, unmarked graves across Canada, and mostly of children. Children who were first kidnapped, then allowed to die from abuse, malnourishment, overwork, neglect, suicide.

They were not schools

A place where large numbers of people (such as prisoners of war, political prisoners, refugees, or the members of an ethnic or religious minority) are detained or confined under armed guard...

Of course -- and as the rest of the definition, not quoted here, states -- the expression is most closely associated with the Nazi death camps. But  concentration camps were not unique to the Holocaust. The "internment camps" where Japanese-Americans and Japanese-Canadians were forced to live were concentration camps. The "detention camp" where Afghan men and boys were -- and still are -- held at Guantanamo Bay is a concentration camp.

In the so-called Indian Residential Schools, perhaps the guards were not armed in the standard sense of the word. But the priests and nuns who ran these so-called schools were guarding children, so they used the appropriate weapons -- fear, threats, reduced rations, bullying, beatings.

To call these places schools is to buy the propaganda. At least let's put quotes around the word school.

Whose culture was cancelled?

To the wingnuts who are frothing over so-called "cancel culture", Canada Day has not actually been cancelled. July 1 is Canada Day, and it still exists. Most Canadians have the day off. No one is preventing anyone from having barbecues, waving flags, and whatever else. The only thing cancelled are some official celebrations.

Members of our communities -- our neighbours, the original inhabitants of this land -- are in a state of deep grieving. And the cause of that grief is Canada. I can think of nothing less appropriate than setting off fireworks and waving the Maple Leaf right now. Cancelling official celebrations is a tiny gesture of acknowledgement. It is, quite literally, the least we can do.

The "cancel culture" lie is particularly and ironically grievous in this instance. Whose culture was cancelled? The stated purpose of these schools was assimilation -- to "kill the Indian in the child". Even the official, grossly diluted name for what took place is cultural genocide.

Last year, a friend posted on social media that celebrating Canada Day is celebrating genocide. I found this deeply unsettling -- in a good way. I've been thinking about it ever since.

At the time, I respected her statement, but I couldn't feel it myself. I posted that despite the flaws of modern-day Canada, I am grateful for this country, so I say Happy Canada Day, despite what I know.

I'm still grateful for modern day Canada, for the privilege and opportunities it has given me. I was an immigrant to Canada, and I may always have some of the immigrant's wonder and gratitude (as opposed to how I feel about my country of origin). But I can carry that personally. I don't need fireworks or an official day to do that.

The people who suffered in these so-called schools, the people whose lives were stolen, whose remains have been now been found, are speaking to us. They are giving us a gift: the gift of truth. They are giving Canadians an opportunity to see their country's history a little more clearly.

I completely agree that they should be called concentration camps. I wonder about other celebrations of Canada: The back to back juxtaposition of O Canada and the Territorial Acknowledgement each morning in schools feels slimy and embarrassing, as if we're saying, Hurray for Canada, and, oh yeah, let's all remember who we stole it from. I let kids sit through the anthem if they're uncomfortable with it for any reason, knowing some have pretty strong reasons.

Thanks for this, Marie. I appreciate it.

Yes, the places where the horrific atrocities were inflicted on all those adults and children should definitely be considered concentration camps. I had never heard about any of it until you took us to the museum in Sointula.

Thank you, mkk. I'm glad that resonates with readers.

It's not surprising you hadn't heard of these places. I have Canadian-born friends who grew up in walking distance of a "residential school" and had no idea that they were anything but normal schools.

Just a point: the U'mista Cultural Centre is in Alert Bay. We did go to a museum in Sointula, but that's the Sointula Museum, full of old stuff from when the community was settled by Finns. Both places are accessed by the ferry at Port McNeil. :)