Yesterday, after we dropped the pups at daycare, Allan and I took the BART into the city, but got off at separate stops. Allan was meeting a blog-friend (someone we have met before, and went to a game with the last time we were here, in 2010), and then had an appointment at Kayo Books, a mecca for collectors of pulp paperbacks. Allan always hunts down used book stores when we travel, but this was a special find, something he's wanted to do for years. (As usual, I had no idea of this until we planned the trip.)

I stayed on the BART one stop further, then took a Muni Metro train that turned into a streetcar, to the Sunset-Irving area. Once outside, it was very hilly, so I had a great view of houses and neighbourhoods. I always get a little buzz from being by myself on public transit in a city. It's a little feeling of freedom and adventure, and I love it.

It was cool and foggy, and I was glad I brought an extra layer. Summer in San Francisco! According to Snopes, Mark Twain never said the famous quote attributed to him about "the coldest winter" but when it's late July and you're chilly in this town, it's easy to think he did. (Snopes needs help, by the way. If you use their service, please consider helping them survive.)

I found the Posh Bagel where my friend D and I were meeting. A word about Posh Bagel: this may be the first time I've seen garlic bagels, onion bagels, and salt bagels outside of New York and Montreal. These are authentic bagel flavours that, in most places, have been replaced by the "everything" bagel. They're a busy chain, whipped up a great and fast breakfast sandwich, and are dog-friendly. Well done, Posh Bagel!

D is a really interesting person. He emigrated to the US from Korea as a young teen, and was part of a very Conservative Christian church. Sometime around the time we met online, he began questioning some of those teachings, especially around the personal enrichment of the wealthy pastors, and the hypocrisy of Christians supporting the death penalty, the US invasion of Iraq, racism, and so on.

When Resident Bush ran for re-election, D voted Democrat for the first time. He now belongs to an affirming church, and has really opened his mind to new ways of thinking. He has read a lot of history and politics, and always brings fresh ideas and perspectives to our conversations. Also, he loves animals: we originally bonded over dogs. We met in person when I visited A (FADOJ) in southern California. I'm grateful I met D's dog, the amazing Noah, who is now gone.

D and I talked for a solid hour. One tidbit that was especially interesting to me was about the Korean-American community and racism. One of D's family relatives, an uncle I believe, told him how the US Civil Rights movement paved the way for more open immigration for Asian people. He said, Black people spilled blood, Black people struggled and died, so you could live here. When you see an African-American in "your" neighbourhood, you shouldn't question his rights, you should get down on your knees to thank them. I found this so moving. And really, it's a perspective we should all have. All freedom struggles are related. David said he always thought he was "self-made," but now realizes that none of us are.

D and I meant to wander around the neighbourhood, but mostly we sat inside and talked. We could easily have talked for another hour. We walked a bit in the neighbourhood, a tiny bit in the nearby botanical gardens (without paying for entry), then found a bus. I thought I would need an Uber or Lyft to my next meet-up, but it turned out to be another super-easy public transit ride.

The bus went through The Haight, which I haven't seen in years, so that was a fun treat. This was once the epicenter of the hippie counterculture, but of course all remnants of that are long gone. It's now a funky district for shopping, eating, and hanging out, very colourful and vibrant.

From there, I transferred to a different bus (free transfer with the Clipper card or any Muni card) and headed for The Mission, to meet up with A and her wife M. All three of these friends (D and A/M) are here from Southern California, using our visit and the baseball game as an excuse for a vacation. Yay! Super yay!

A, M, and I converged at Mission Dolores, and took a tour. A and M have a project (a mission) (groan) to see all 21 California missions, picking up fridge magnets and getting a "passport" stamped at each one. It's interesting to see how these Christian institutions now incorporate an understanding of the Indigenous people whose cultures their predecessors obliterated. The Mission church itself is not wealthy or opulent, and it's a significant part of US and California history. But... it's a tough thing to see, knowing what we do.

I was eager to see some of the murals in the Mission (or Mission District). I love street art and somehow on all my trips to San Francisco have never seen these. I did see a few from the bus window: so cool to see bright bursts of art in random places! On a tip from the person working in the Mission gift shop, A, M, and I found a long alley lined with at least a dozen mural panels on each side, all political with social-justice themes, each by a different artist. It felt like a giant graphic novel.

I was really missing our camera, which we accidentally, stupidly left at home in Port Hardy. It would have been great to get both details and wide-angle pics of these murals. On the other hand, I am very grateful we have cameras on phones now! (Photos below.)

After this, we went back to the Mission. While we waited for Allan, A looked for restaurants for our late lunch / early dinner. With Allan at a used book store, and only one phone between us, I was a little concerned that he'd be very late... but he was right on time. Surprise, we are all grown up now! Allan had our backpack plus two cloth shopping bags filled with books. No surprise there!

We walked to the restaurant, seeing at least one mural along the way, then sat in a covid-constructed outdoor dining booth for some Peruvian-Mexican food, including a pitcher of sangria. We laughed a lot and had a really good time. Plus I got to hear the origin story of A and M, and how M, returning to school as an adult, connected with her Mexican heritage for the first time. Two beautiful stories that had me both laughing and teary-eyed.

I hate goodbyes: they crash right into my abandonment issues. I get all choked up and weepy, and remind myself how fortunate I am to have these enduring friendships, and to have such privilege, to travel to see friends. My sadness at goodbyes is a reminder about love.

From the Mission, Allan and I picked up a BART train, zipped back to Berkeley, picked up two extremely overjoyed pups, and spent the evening unwinding in the cottage. Allan showed me his book haul -- stacks of vintage pulp paperbacks, plus three large hardcover books about pulp paperbacks. (Books about books!) I wished he had shown us these at dinner. The cover art and jacket copy is hilarious. 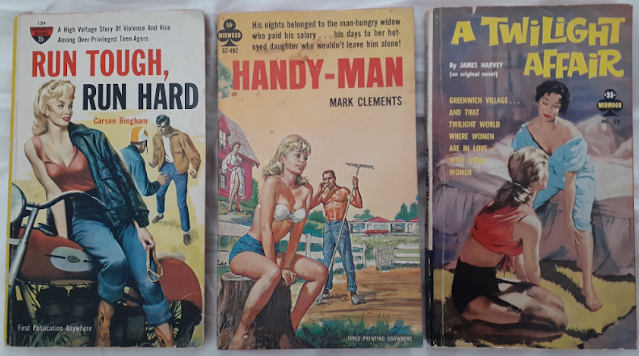 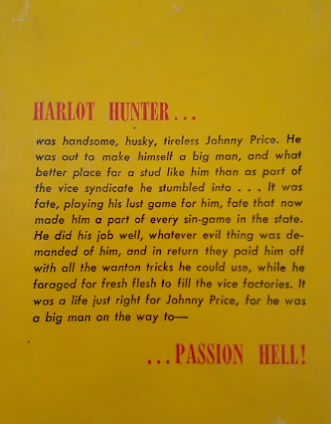 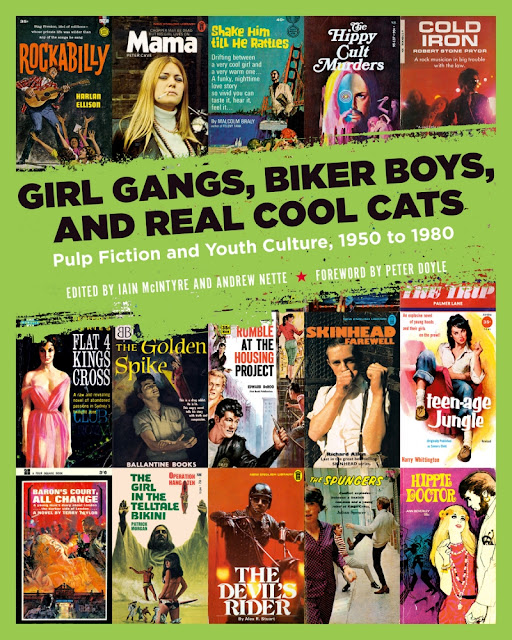 Some murals from the Mission. 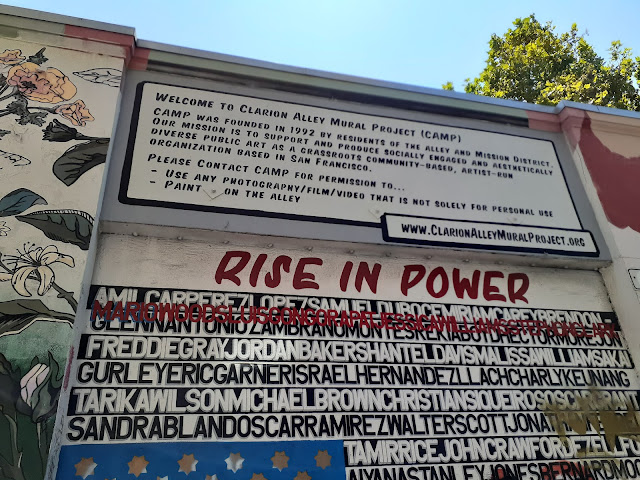 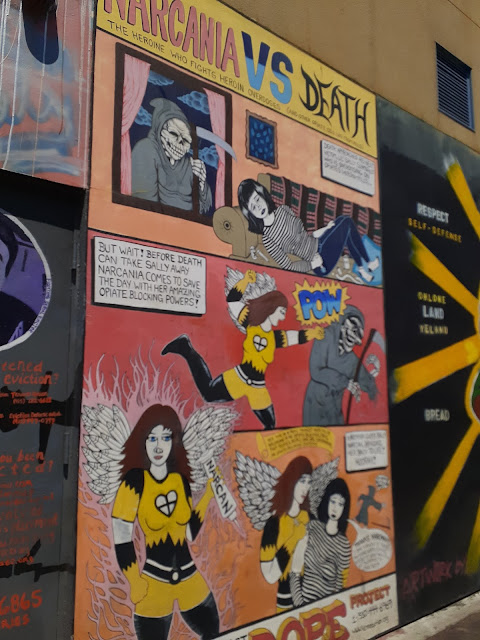 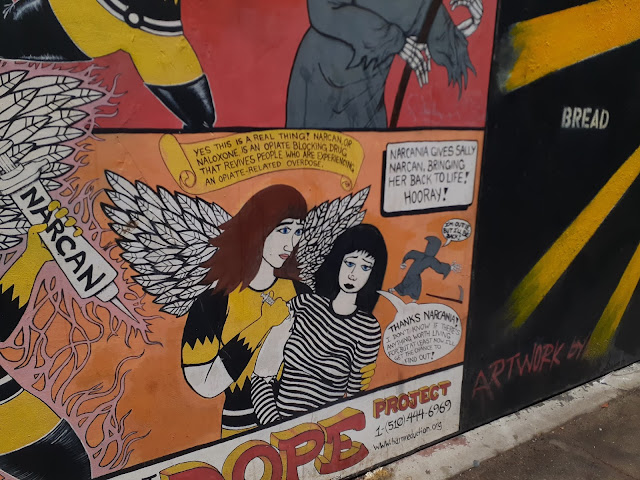 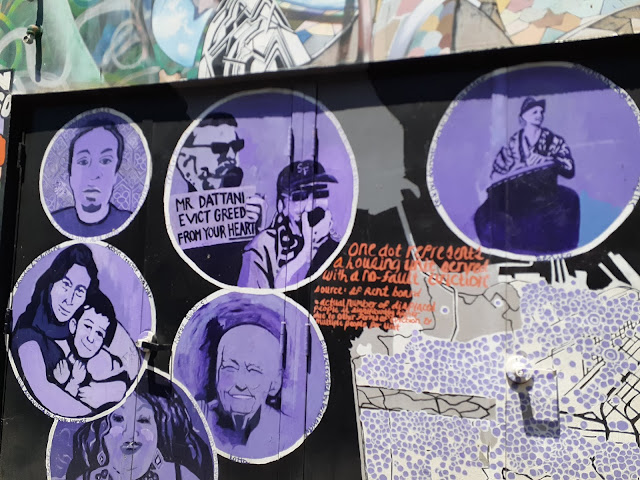 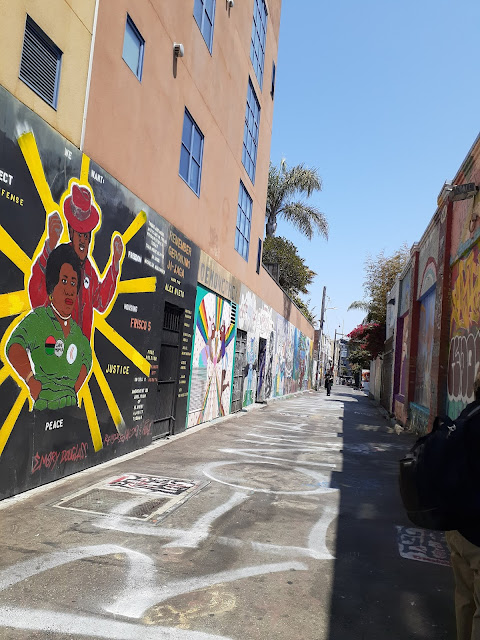 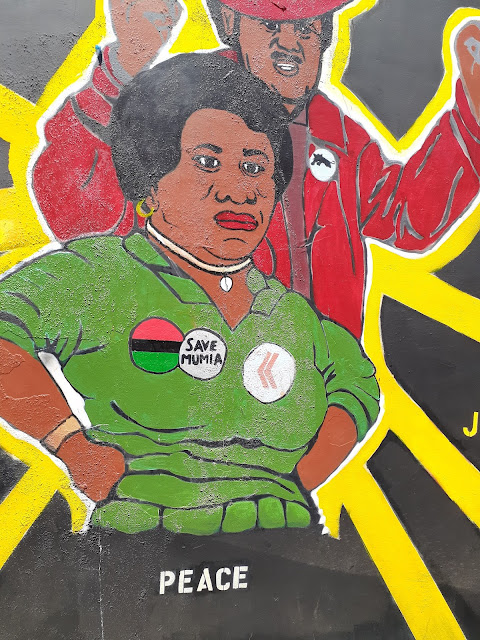 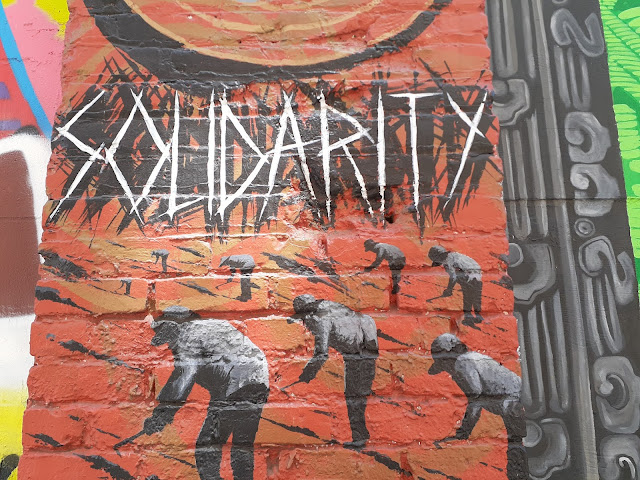 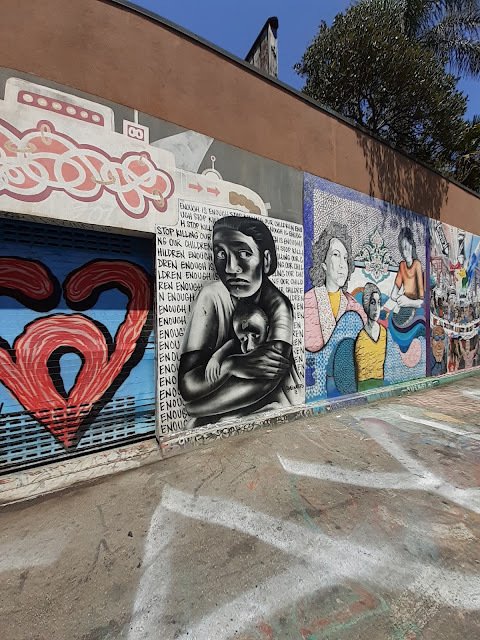 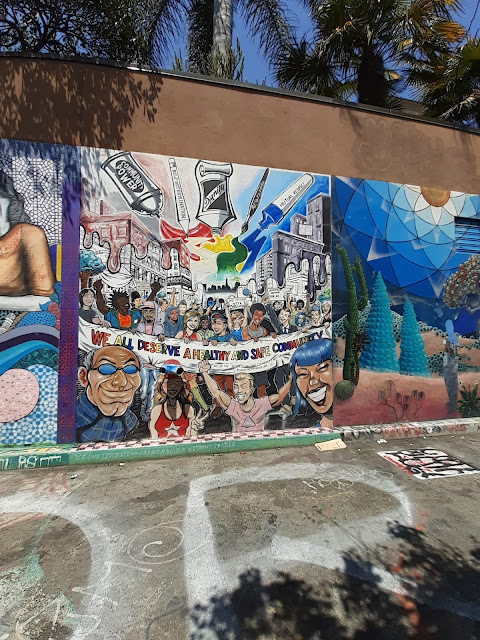 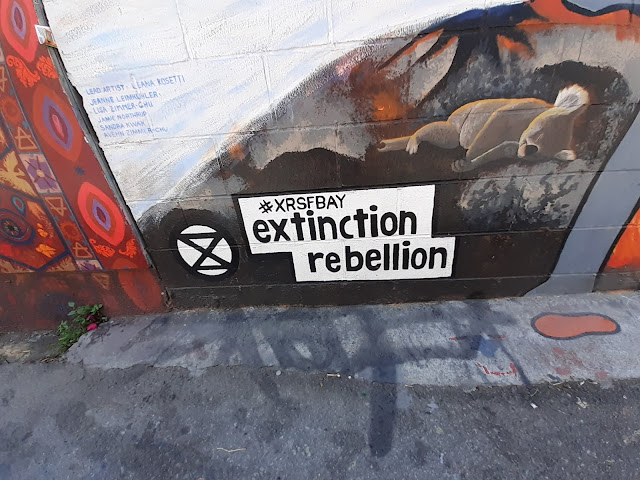 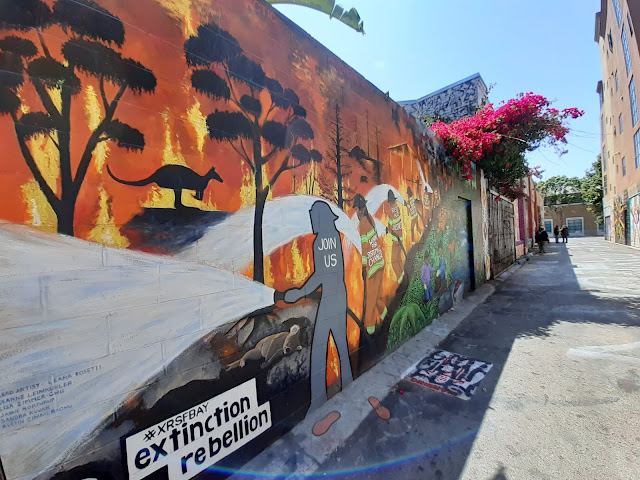 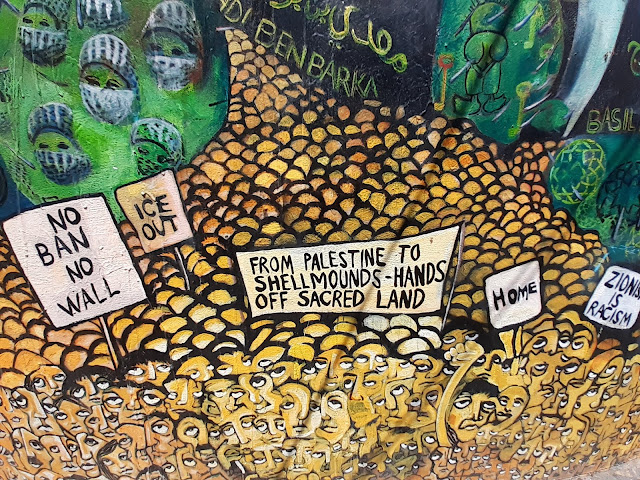 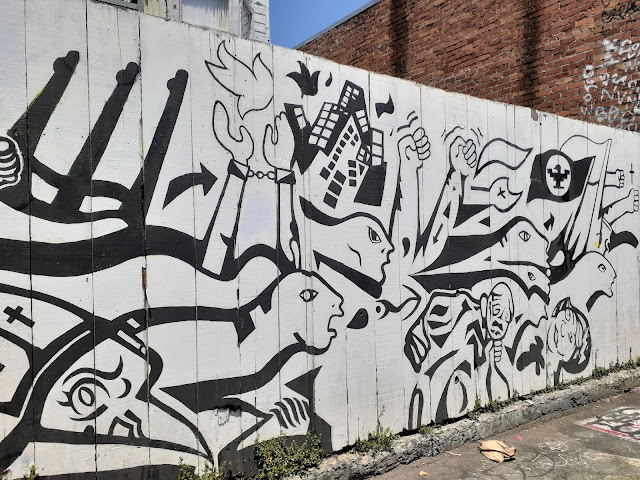 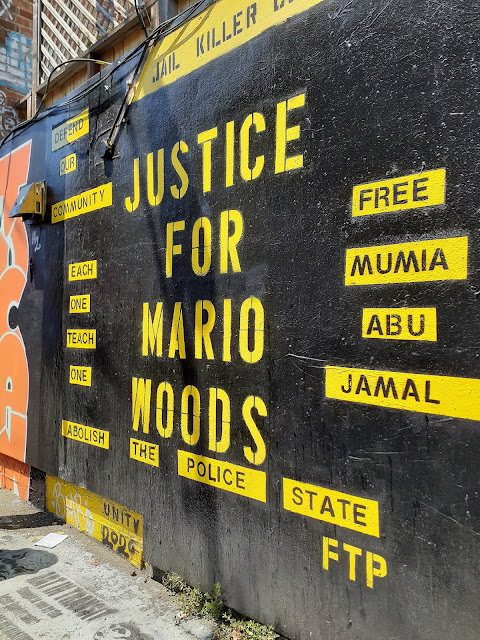 This music-themed mural was elsewhere in the Mission. 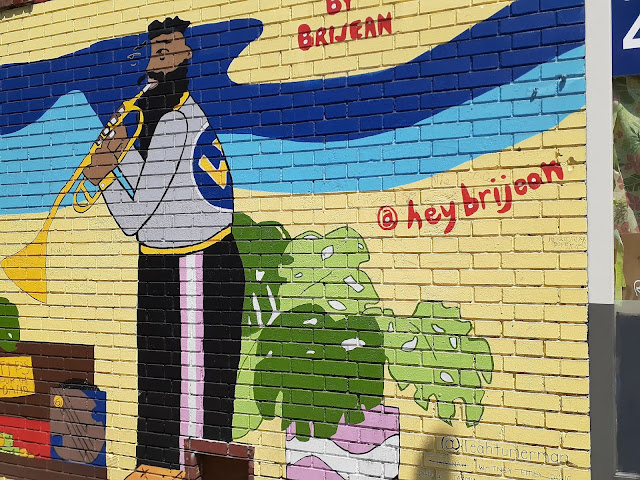 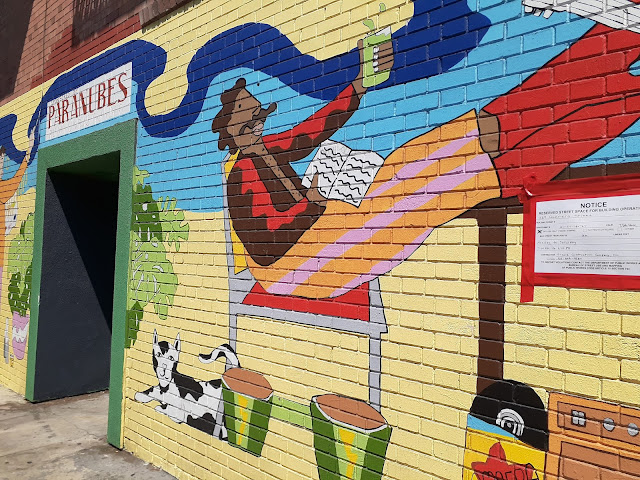 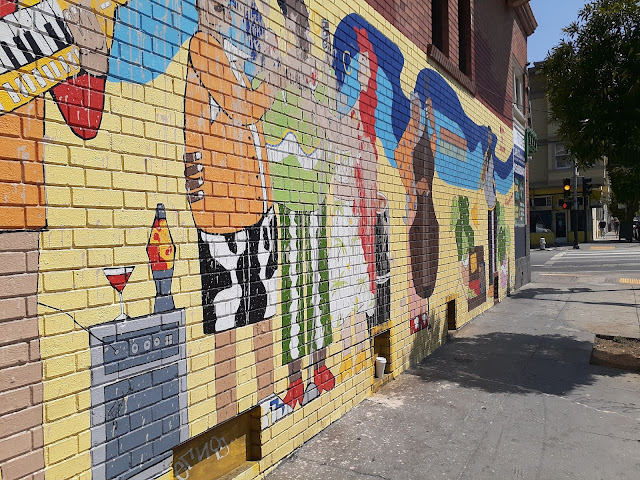