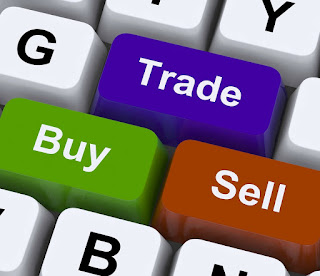 I recently lost a lot of weight* and am selling all my plus-size clothing.

Over the years I have donated many items and sold many others. Whether to donate or sell is just a quick gut-instinct decision, based on an item's condition, its resale value, our current finances, and my mood.

Because I have to buy almost all new clothes, earning a bit of income through sales offsets some of that expense. It also reaches many more people than the one thrift shop in town can.

Like any good re-sale transaction, these items will be a good deal for both buyer and seller, keep a few things out of landfill, and extend the life of some usable goods.

Anything that doesn't sell, I'll donate to an organization such as Dress for Success, or something similar.

In our area, there's no Craiglist or Kijiji -- only Facebook groups. Indeed, there's no anything except Facebook. I've learned that in many small communities, Facebook is the internet. This is sad on so many levels. At the library, introducing customers to new-to-them internet services is often a tough sell. But for local information, Facebook is everything.

I wasn't keen on posting my clothes on Facebook, for the same reason I don't share social media locally: privacy. That is, the total lack thereof in these small communities. I do use the local Facebook buy/sell groups, but for some inexplicable reason, selling my clothes felt too personal. So I thought I'd see what other options exist.

From past selling experience, I know eBay is full of used clothing for sale, but with eBay there are always mailing costs. Mailing costs to the US are prohibitive, and eBay Canada is much more limited. At some point it occurred to me that there must be apps exclusively for used clothing sales.

Are there ever. There's a plethora of such services. (An excuse to use the word plethora!) Unfortunately for me, most don't apply to my situation.

Most of the resale clothing apps are after-markets for high-end designer goods. Some are even more specific, such as designer shoes or bags (pocketbooks), and some only accept clothes from a specific list of designer labels. This seems odd to me, but the whole universe of designer labels is alien to me.

There are also apps for sales of single-use garments, like prom dresses and bridesmaid gear.

Then there are the apps that didn't make it: all the "best places to sell your used clothes online" stories (such as this one) feature apps that no longer exist.

And finally, some are not available in Canada.

Weeding out for all these reasons, I was left with three options: myWardrobe, eBay, and Facebook. I decided to go for all three.

The most time-consuming part of the process, by far, was taking pictures of all the clothes -- front, back, any details, plus a close-up on the label. Once that was complete, it was easy to list everything, although it took many hours. It was much easier to do via smartphone than it would have been at a computer. As a general rule I prefer a keyboard to onscreen typing and I am not an everything-by-phone person, but in this case, using apps simplified and streamlined the process.

After posting everything using the myWardrobe and eBay apps, I decided to also put everything on Facebook anyway.

The privacy issue still niggles at me, but I'm putting it aside for the ease of the local transaction. Dealing with the post office in our little town is not difficult, but it's still better -- easier and less expensive -- to avoid that if possible.

I should note, too, that it's only the clothes that I feel shy about. I've sold and given away many things through the local Facebook buy/sell/trade group. Just recently we gave away a lawnmower after upgrading ours, and sold a headboard -- apparently a much sought-after item -- after a company shipped it to us by mistake.

So I love the local marketplace groups. I just felt uncomfortable hanging up my clothes in public, so to speak. But yesterday, someone in town popped over, scooped up 10 tees, handed me some cash, and was on her way. It was a quick, friendly, simple transaction, as all my local selling transactions have been, whether through Craigslist or Facebook. I just needed to get over it.

When we moved from our last rental house in Ontario into an apartment, I sold ten years' worth of outdoor equipment we had accumulated -- lawnmower, patio furniture, garden tools, wheelbarrow, tarps. I sold every last item, which helped with moving costs.

Come to think of it, every one of our moves, beginning with New York City to Canada, then every move since, has been a bonanza for folks who trawl Craigslist, Freecycle, Trash Nothing, Kijiji... and now Facebook.

I never post my selling links on this blog, but if you're in the market for plus-size clothing, feel free to get in touch.

I hope you made enough money to make all that effort worthwhile!

I already have -- but my threshold is low. I don't find the effort a big deal. I'm not that busy, and I am spending a lot of money on clothes, so anything I take in is good.

It will actually be trickier to donate the professional/work type clothes to a place that can put them to good use, given where we live. I'll look for a place we can hit on our road trip.

Although tbh I did this in the past when I was much busier, too. It isn't very time consuming and I find it worth the effort.

I just donate my old clothes to Good Will or the Salvation Army. We had one bad experience with selling. We advertised drapes for sale. A woman came and purchased them. The next day she wanted her money back because she put them in the washing machine and ruined them. It was extremely unpleasant. (We didn't give her her money back.) That was in 1983. Every time I've suggested we try and sell something we no longer need (cars, air conditioners, skis, etc.), Harvey reminds me of that experience. It sounds like you have much greater success.

Since clothes donated to Goodwill and SA end up being re-sold in Africa for profit anyway, I might as well make a bit of profit first. In this case the clothes are like-new. I don't normally replace clothes in perfect condition.

I don't sell everything. I have given many things away -- lawnmower, couches, air conditioners, many surplus items, but I do that through Freecycle, Trash Nothing, or now through the Facebook groups.

LOL re one bad experience in 1983. That is not typical. Especially in the internet era, with ratings of buyers and sellers. It's much more systematized on Craiglist or eBay.

This is strictly my domain. Allan is more of a buyer than a seller. Much more! :)

One other reason we don't sell or donate through those sites---we don't want to have to deal with people. I know that sounds awful, but I don't want to have to answer calls or emails or have people coming to my house. I guess that's the introvert in me. Much easier to take things to a source that collects them and let them deal with it all.

It doesn't sound awful at all! There are many things I don't do because I don't want to deal with people.

Personally, I find the interactions that come through Craigslist or Freecycle or FB Buy/Sell groups extremely manageable -- very brief, cordial but businesslike, exchange item for money, boom, it's done. But I can definitely understand wanting to avoid it. Allan would hate it.

I put on my library face, the face I use to deal with the public. :)

Business is brisk! But almost all of it is through Facebook.

In other news, I see Mailchimp is working. I haven't been able to get it to pick up the current post, so it could include more specific links. But it is sending a link to the blog, so that's good.

Yes I’ve been getting the general email notification that there’s a new post.