what i'm reading: the sword and the shield: the revolutionary lives of malcolm x and martin luther king jr. 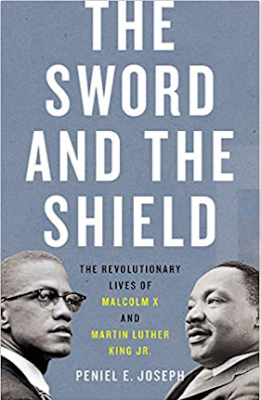 When I read a review of The Sword and The Shield: the Revolutionary Lives of Malcolm X and Martin Luther King, Jr., I knew it was a book I'd been waiting for someone to write.
I despise the way Martin Luther King, Jr. has been sanitized and diluted for public consumption. The version of King that is widely celebrated is a pile of sentimental goo that the real King would not have recognized, let alone endorsed. King's radical legacy is reduced to a kind of bland "why can't we all just get along". His memory is used as a pacifier. King is officially lauded because of the fear of Black violence, and the ruling class' desire to promote docility among Blacks.
So the public doesn't see King. Doesn't see the King who railed against the U.S. war in Southeast Asia, the King who marched with labour unions, the King who knew that without economic justice, desegregation was a hollow promise. The anti-capitalist King. The anti-imperialist King. The anti-war King. That King doesn't fit the program. (I used to write about this all the time, but at some point decided to discontinue this as an annual event on this blog. )
And of course, this diluted version of King is contrasted with an equally simplistic and false version of Malcolm X, reduced to a handful of scary quotes, and also without any real understanding of Malcolm's message or his methods.
Malcolm connected the American civil rights movement to independence, anti-colonialist struggles all over the globe. He reached wide swaths of African Americans who were overlooked by, shut out from, the dominant civil rights narratives of the time. He questioned why violence against Blacks was accepted -- tolerated, condoned, promoted -- but Black people were expected to pledge not to defend themselves.
Historian Peniel Joseph challenges us to see both of these leaders clearly. In The Sword and the Shield, Joseph contrasts the intellectual, philosophical, and political growth of both  men. He demonstrates how, over the course of their short lives, Malcolm and King's philosophies were moving towards each other, coming closer together, and how, by the time King was assassinated, their views had overlapped.
For me, one of the biggest takeaways from this book is that within movements, there is room for -- there is need for -- a multiplicity of methods. Sit-ins, freedom rides, mass demonstrations, Black Power, uprisings (so-called riots), teach-ins, government lobbying -- all of it worked together to create change. This includes violence or at least the threat of violence. No revolution has ever succeeded without that, an inconvenient fact that the deification of King is meant to mask.
I also enjoyed looking at what made both Malcolm and King great leaders. They both had tremendous personal charisma, and an uncanny ability to easily relate to people in all different circumstances, while always being genuinely themselves. They were both tremendous listeners, and humble. Perhaps most importantly, they both had the courage to allow their thinking to evolve. While their values were profound and unshakeable, they knew that we all have much to learn. They understood their lives as a journey of learning.
I found this book important and edifying, and I wish I could say I enjoyed it. It's less narrative nonfiction, and more academic and didactic, and I didn't find it an easy read. However, it's an important piece of the history of the U.S. civil rights movement, the Black liberation movement, and all people's movements.
* * * *
I rarely do this, but I'd like to share one of the blurbs on the hardcover edition of The Sword and the Shield. There are four blurbs from an impressive quartet: Ibram X. Kendi, Diane McWhorter, Michael Eric Dyson, and Henry Louis Gates, Jr. I thought Gates nailed it.

Arguing against facile juxtaposition of the political philosophies of Martin Luther King Jr. and Malcolm X, Peniel Joseph has written a powerful and persuasive re-examination of these iconic figures, tracing the evolution of both men's activism. The Sword and the Shield provides a nuanced analysis of these figures' political positions in addition to unfolding the narratives of their personal lives. Well-written and compelling, this important new book brilliantly explores the commonalities between the political goals of Malcolm and Martin.

Every semester in which I teach a course on Muslims in the Civil Rights Movement at Southern Methodist University, I give my students a selection of quotes from both Martin Luther King Jr and Malcolm X and ask them to guess who said what. So for example, I will posit the following two quotes and ask for their proper ascription:

"Ignorance of each other is what has made unity impossible in the past. Therefore, we need enlightenment. We need more light about each other. Light creates understanding, understanding creates love, love creates patience, and patience creates unity. Once we have more knowledge (light) about each other, we will stop condemning each other and a United front will be brought about."
"The majority of white Americans consider themselves sincerely committed to justice for the Negro. They believe that American society is essentially hospitable to fair play and to steady growth toward a middle-class Utopia embodying racial harmony. But unfortunately this is a fantasy of self-deception and comfortable vanity."
And every single time, they have been unable to identify the first quote as belonging to Malcolm, and the second to Martin. But it is not just a few students that have gotten it wrong. The American education system and most mainstream portrayals of Martin and Malcolm have been simplistic and sanitizing.
Martin is the perfect hero who preached non-violence and love, and Malcolm the perfect villain who served as his violent counterpart, preaching hate and militancy. The result is not just a dishonest reading of history, but a dichotomy that allows for Dr. King to be curated to make us more comfortable, and Malcolm X to be demonized as a demagogue from whom we must all flee. Reducing these men to such simplistic symbols allows us to filter political programs according to how "King-like" they are. Hence, illegitimate forms of reconciliation are legitimized through King and legitimate forms of resistance are delegitimized through Malcolm X.
Malcolm was never violent, not as a member of the Nation of Islam, nor as a Sunni Muslim. But Malcolm did find it hypocritical to demand that black people in the United States commit to non-violence when they were perpetually on the receiving end of state violence. He believed that black people in the US had a right to defend themselves, and charged that the US was inconsistent in referencing its founding fathers' defense of liberty for everyone but them.
Malcolm knew that his insistence on this principle would cause him to be demonized even further and ultimately benefit the movement of Dr. King, which is exactly what he had intended. Just weeks before his assassination, he went to Selma to support Dr. King and willingly embraced his role as the scary alternative. In every interview, in his meeting with Dr. Coretta Scott King, and elsewhere, he vocalized that the US would do well to give the good reverend what he was asking for, or else.